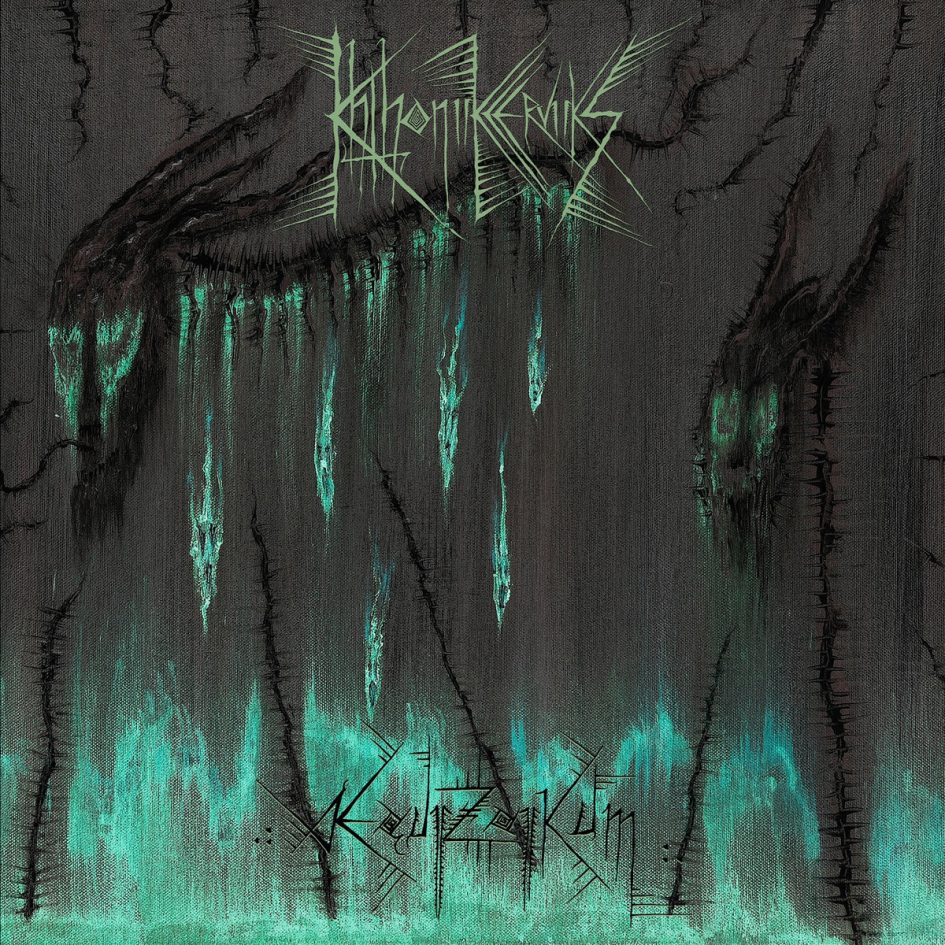 Congratulations on this German trio for having the whackiest name, album and track titles I have encountered in a while. Just naming one song we have delights such as ‘Kollektiing Koffiin Naiils (Délire des Négations Sequence 1.0)’ to wade through. I have a feeling this is not going to be a track by track evisceration of their art. The label describe all this “as tongue-twisting title that’s as treacherous(ly adventurous) as its contents” but it is just as easy to dismiss it all as frankly “a bit daft.” Luckily once you delve into things the music is indeed a lot more serious than one may imagine, comedy metal this is definitely not. The band apparently rose from previous projects Ignis Uranium and Zuul and are keeping the spirit of what they achieved with them alive here. I note they have a new drummer Gharmonboziia as previous sticks-man Ohourobohortiik Ssphäross probably had enough of being called that and departed leaving Okkhulus Siirs and Khraâl Vri*ïl to it. Let’s depart with all the names and titles and get to the crux of the matter though, the music as in the grand scheme of things it might well be overlooked and that would be a shame.

The follow up to SeroLogiikal Scars (Vertex of Dementiia) in 2015 has obviously seen the band catching the attention of Iron Bonehead who are claiming “truly, no one sounds like Khthoniik Cerviiks” to an extent they are correct. What we have here is extreme death metal but it is far from the simple bludgeoning primitivism of many of the label’s peers. Indeed, what we have here is “technology” and therein lies a clue and the unmistakable spectre of early Voivod which hangs around it. From wraparound Morse code and heart beat monitors we run amuck with a twisting, turning deluge of futuristic, technological madness that wraps itself around you in a haywire fashion. Amidst it all we have the barking vocals and growls of the founding members vocals, the lyrics of which if the past album is anything to go by full of technocide, metabolized schizophrenia. With them, music and everything else taken together you may well wonder if it is all being made up on the cuff but the tightness and incendiary nature of the technologically killing craft shows undeniable flair and tightness. Yes, there are definitely times original space cadets may well be flung back into the machinery of the original blackguards but it is wrapped up in a whiplashing ferocity that never deviates in thrashing the listener to intense mania and delirium.

First few plays of this catch you by surprise and may well go over the head if not paying attention, the 41 minutes passing by in a blur or at ‘Kriitiikal Mæss’ to use the group’s own words. Scratch beneath the surface and concentrate though and this is quite the jaw dropper in the playing stakes. One has to wonder how it translates live and I am sure it would be quite the experience to witness. Lucky those that have. For me the compositional complexity of many death metal bands puts me off them and although Khthoniik Cerviiks definitely have it I find myself more akin to slam fists and bang head in unadulterated pleasure to this. It has spirit, spite, extremity and sci-fi clad miasmic mentalism flowing through from beginning to end and displays everything one who simply doesn’t understand why the likes of Blood Incantation are so revered, could well be truly looking for. Not so much a ‘Bloodless Epiiphany’ but a bloody good one!