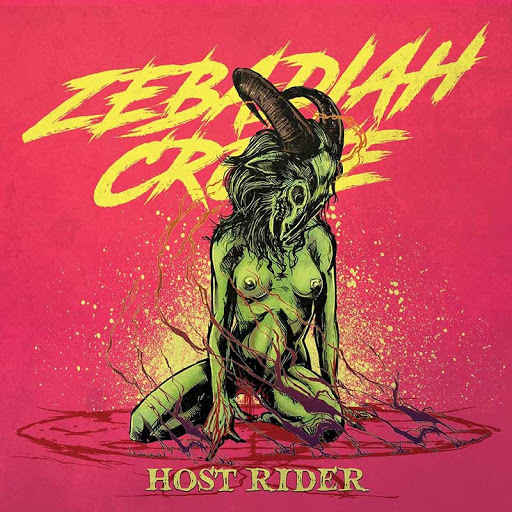 It was, believe it or not, about ten years since I last came across this lot. I reviewed their debut for the precursor to Ave Noctum but… Honestly? I genuinely cannot recall what I thought then and it hasn’t exactly been a constant on rotation. Which doesn’t mean much so let’s treat this as a first acquaintance shall we, eh?

I guess ‘Knucklebones’ sets the stage with a weird little pulsing keyboard thing before a low gear dirty riff bulldozes in with vocals like a howling dog. This is bass strings flapping in the wind stuff and has a serious black ‘n’ roll vibe in its filthy wake. It’s got a genuine groove to it, punk metal boogie like Tank back in the day gone black metal and with some weird keyboards or backing vocals floating around the ether like flies circling a carcass it… Yeah, it has some serious stripped back attitude to it. ‘A Tincture Of Malice’ I guess follows the same mould; kind of weird psychedelic mini-intro before the monomaniacal riff batters in and just drives the rest of the song. The weird bits are different; strange intermittent hum, a really nice drum sound (hey the drumming is great throughout). OK, got the hang of this until they change it up, thinks I. The wonderfully titled ‘Mantle Of Nails and Orphan Skin’ follows the same route but actually has a really cool breakdown two thirds of the way through.

OK by this point it’s getting a bit awkward if I’m honest. Only for a reviewer, mind. It’s kind of a weird beast to cling onto the tail of. When the riff takes over that is just it; the riff. It ploughs on like an oil caked rusting steam engine through an avalanche. It just drives and the sound remains pretty constant throughout the entire album. When things turn a bit weird; keyboard flashes and odd vocals, added drum beats, it’s like watching a psychotic with tourettes; mad, weird and utterly compelling tics throwing off the gears, threatening to strip cogs and that’s where it gets interesting.

It almost defies criticism this album. Despite the one riff per song approach, not one is long enough to outstay its welcome. Nor does the album as a whole clocking in at just about the perfect half hour for this utter racket. And when those weird sections flick and tic on it is utterly mesmeric. Part of me fights against the similarity of riffs, the other part just throws myself into the maw on the thick slick bouts of unbalancing jazzy psyche. Add in seven titles that are just wonderful use of language it kind of makes me wish I had a lyric sheet with this. Maybe a physical copy will. Probably written in some dubious semi-liquid by shaking bony fingers.

This is an album that genuinely seems to have chaos at its fly-eating, spittle spewing core. It grows on you like black mould. It’s the most unhinged shit masquerading as rock n roll I’ve hear since Junkpile Jimmy. If it had hardcore bones it would be Bloodlet’s ‘Three Humid Nights In The Cypress Trees’.

If you haven’t washed or shaved for a month and are sitting around in your soiled pants then maybe you should dance to this too. It’s the soundtrack to your mind.

Is it good? Dunno. How sane are you?