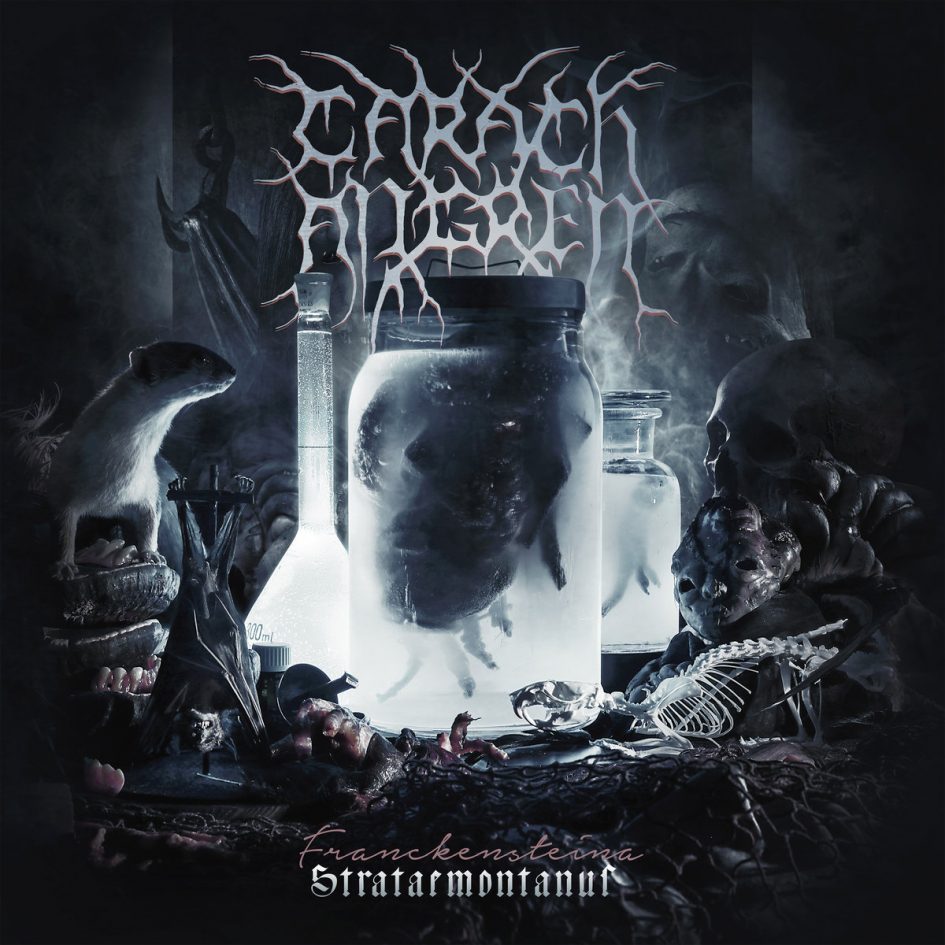 It’s time for some theatre from those black metal horror show purveyors from the Netherlands, Carach Angren. Or at least that’s what I was hoping for. Having gone through wars and shipwrecks and all manner of grotesquery from them over their previous five albums, my hopes were high.

The scene is set. The narrative is of golden woodlands but the winds are whistling and the air is creepy. “Parents are screaming”, we’re told, and there is dark symphony. Cue fast and unstoppable black metal and the raspings of Seregor. Ardek is accredited with “orchestra” and there’s plenty of it to accompany the murderous drumming and threatening guitar. Meanwhile the dead son returns and bites his mother’s face off. The nightmare indeed has just begun. The sound is distorted. We’re in the “Franckensteina Strataemontanus” factory. The sounds are industrial. A chorus strikes up. The terrible tale continues. It could be Rammstein we’re listening to, in fact back in the real world Ardek has lent his services to Till Lindemann of the same. You have to laugh, don’t you – well it’s a wheezy laugh before the dark slow march of the snake-infested “The Nectromancer” is upon us. It’s not loud, but it is nasty, extreme and out there. Enter the violin, accompanied by rapid-fire drums and howls. All the time fires are burning and turbulence fills the air. Yet the narrator asks plaintively “What have I done?”. The symphonic black metal becomes epic and melancholic as we contemplate the tragic and ghastly consequences.

“Operation Compass” is pure Carach Angren. Capturing the 1940 invasion of Libya and preceded by the British War Cabinet message, it dramatically captures the horror and imagery of the scene: “black oil erupting like a fountain from hell”. Dead bodies twitch, winds are ghastly, “he won the battle but not the war” – the scene is powerful and one of death and horror. “Monster” takes us back to where we are. The drum hammers. The opening bars have a strong air of Rammstein about them. Our monster’s soliloquy is customarily vivid: darker than dark tones, sheer menace, scary and as it pumps on amid screams and evil laughter, we are spared no horror from this “sick perverted psychopath”. Now to “Der Vampir von Nürnberg”, a bi-lingual, classical, black metal monstrosity. It may be orchestral black metal, but “Skull with a Forked Tongue” rises to sheer majesty as Seregor rasps his tale of his dilemma as his flesh rots after his experiments in the occult. Dramatic beginnings signal the entry of “Like A Conscious Parasite I Roam”. Swinging like a pendulum, the orchestra provides the dark colour. It’s story of decay and regret. Ghoulish sounds mix with the piano, the violin and the orchestra, before the sound develops into something deeper. The drum triggers, the piano continues to play, and the violin returns as “Like A Conscious Parasite I Roam” is played out in an air of overwhelming sadness and tragedy. All that remains is “Frederick’s Experiments”, a final maelstrom of orchestral black metal with tales of disembowelment, imprisonment and torture. This is “Frederick II, Roman Emperor, a man with a taste for scientific horror”. Just like Carach Angren, then. It’s all in the music and the words.

The thing about Carach Angren is that you expect something exaggerated and excessive. It’s such fun even though it’s all dark and ghastly. More controlled and wider in musical range than the earlier works, here again the music is rousing, eccentric and extreme, and it matches perfectly the context of the genius lyrics and delivery, which unlike some bands whose lyrics are incidental, here paint vivid, usually blood-red and tragic pictures. Carach Angren exude flamboyance and imagination, and for me “Franckensteina Strataemontanus” is one of their best.