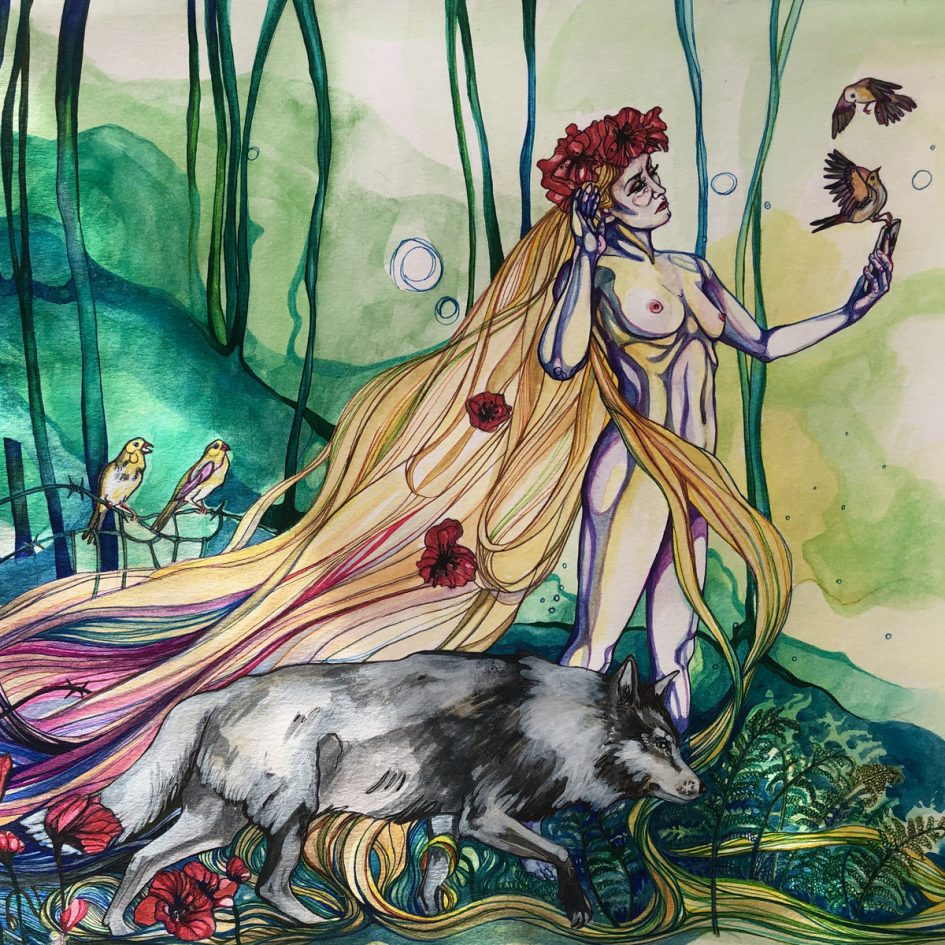 Trondheim veterans Arabs In Aspic have been the standard bearers for the retro-rock and classic prog stylings in Norway for the past 15 or so years. With a big musical focus on making their sound and approach sound like an authentic late 60’s and early 70’s musical offering, they manage to blur the lines between psychedelic vibes, funky feel, dramatic instrumentation and hypnotically captivating, using a wide array of instruments; 12 string guitars, Hammond organs, Rhodes Mellotrons, Pounding drums, ballsy overdriven guitars and gratuitous vocal harmonies. With their 7th album “Madness And Magic”, the band continues on with their constantly evolving sound, the latest iteration of it being more atmospheric and acoustic driven, as demonstrated on their previous release ‘Syndenes Magi’. Recorded with two drummers, there is more of a focus on the percussive elements of the music, along with the usual assortment of typical prog sprinklings; conceptual vibes, deep and open to interpretation lyrics and plenty of extravagance where called for. All that remains is to determine whether this is more madness, or more magic.

After several listens to the record, something which is needed in order to gain a better feel and understanding of it, the best way I could describe the music would be to say it sounds like the result of sticking Pink Floyd, Yes, Kansas, Queen, Blue Oyster Cult, Deep Purple and the LSD-years Beatles together and mixing it up and seeing what came out after it all. Rich vocal harmonies with a good sense of melody help to steer the tracks, along with complimenting the music beneath them. Crisp guitar work which retains plenty of style and technique to go with the minimalistic but expressive leads and chord sections is bolstered by the hypnotic and free flowing percussive elements which give structure to the seemingly free-flowing feel. Organ work reminiscent of Deep Purple but with the progressive leanings of Yes and all together it has that feel of the late 60’s and early 70’s.

Musically, aside from some over-extended sequences which just seem to have been included for lengthening tracks in places or for atmospheric impact, it all fits together well and sounds decent enough too. The captivating and relaxing feel is a nice experience and the vocal harmonies synergies well with the organ elements. Opening track “I Vow To Thee My Screen” sounds a lot like ‘Wish You Were Here’ era Pink Floyd, making me think ‘Welcome To The Machine’ whilst the ambitious double part ‘Lullaby For Modern Kids” (parts 1 and 2) have plenty of the oddities present in King Crimson and Frank Zappa, delving into jazz-like sections and avant-garde ambience whilst retaining a rock-based foundation whilst “High Tech Parent” sounds like late 60’s Deep Purple, again with the funkier feel and quirky organ licks.

These four tracks make up the better section of the release, they embody what I find appealing in this release and they work well with each other. It is only when it comes to the more experimental and psychedelic orientated closing duo of tracks that things start coming apart slowly. “Madness And Magic”, the title track is a well crafted track in terms of the arrangements and composition, but in execution it doesn’t do much worth noting. Some sections have a good dramatic and dynamic feel to them, but on the whole it’s just a watered down Beatles feel which shows more imitation than imagination. The excessively long and over indulgent “Heaven in Your Eye” could have been a good musical offering to close the release, but the extended-extended instrumental section drags out far too long, and comes across more as a medley of influences and styles the band can play in rather than something of musical substance. The track itself is around the 16-minute mark, and realistically, 10 of those minutes are mostly dramatic instrumental work designed for tripping too.

Overall, it’s an album where your mileage may vary. You’ll either love this all or be unphased by it. Despite the well-crafted and carefully composed songs, it is a rather dull musical affair for the casual listener. This is something which might be improved if you were to ‘open your mind’ a little, but for those who do not wish to alter their perceptions, it is a case of something to either let fade into the background or ignore entirely. If you are however a fan of the progressive rock ways of old, then you might just find this magical.