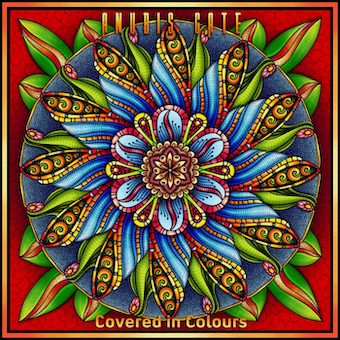 Tributes to other bands can be very interesting, and there is great potential for talented bands to interpret good songs and make them better. Anubis Gate is a talented band. I interviewed the band’s amiable multi-instrumentalist Kim Oleson a few years back for Ave Noctum and got a gentle rollicking for my suggestion that there could be any sort of Scandinavian element to their work. To be fair, this was no protest statement just to stand out from the crowd, and it’s become evident that the Beatles, earlier prog bands and, to quote Kim, “melancholic pop” have all found their way into the Danish band’s special brand of commercially styled and sophisticated prog metal. Anyway, this now is their selection. The last time I reviewed one of these tributes, the band in question went for stuff like Bathory, Death and Obituary. Anubis Gate’s choice is, as the title of the collection suggests, covered in colours.

In eager anticipation of waiting for my copy to arrive, I did catch the band’s version of Visage’s “Fade to Grey”. I know the original, and was quite disappointed at how little expansion there was. There’s more of a choral line and it’s echoey, but it’s like New Wave stood still. One of the more memorable parts of the original version was the spoken the French section. Here it is, just the same. It’s their choice but maybe internationalising it with a different language might have made it more interesting. The collection is in five segments: Starters, The Jazz Metal Lounge, The Beautiful Ones, Eighties Corner, and No They Didn’t. If that’s not so clear, we’re talking about 14 songs by various artists including Steely Dan, Mike Oldfield, AC/DC and the Beatles. I knew all the artists except for one but was familiar with less than half of the songs, which makes it more fun. There’s only one Scandinavian band there, and that’s the one I didn’t know, thus dispelling that bit of fake news about Anubis Gate and their influences once and for all.

The mix opens with a cover of Japan’s “Still Life in Mobile Homes”. I knew Japan from the wonderfully exotic “Visions of China” but not this song. It’s eccentric, playful, joyful, electronic, commercial and with the wonderful freshness that Anubis Gate and Henrik the vocalist infuse into everything. The Anubis Gate version had me leaping to listen to the original. Well the Japan version is even stranger. Great choice of song. Anubis Gate 1, Japan 1. My attention was captured. And so, strangely, to King Crimson’s “Red”. Musical wallpaper. Bring back Japan, please. What we got instead was a wonderfully haunting piece by a Danish band called Under Byen. I’m glad to have been introduced to it but Anubis Gate’s presentation is too clean cut. I listened to the original song – this is like reviewing two albums here, I like it – and it’s utterly shattering with a grey urban feel and a Billie Eilish style vocalist. How do you improve on that? Anubis Gate 0, Under Byen 1.

That’s your starters. Now for the Jazz Metal lounge. Well prog metal is how I’d describe the cover of Voivod’s “Experiment”. It’s old school and demented. Not so interesting unless you want to sound weird and retro. More up my and, I fancy, Anubis Gate’s street was Mike Stern’s “Chromazone” – jazzy drama with layers of attitude. This is big city, night lights stuff – LA, San Francisco, Miami, Milton Keynes. Ok, just joking, not Milton Keynes. Do they have big cities in Denmark? I’m on a high again and thinking of the great days when I could travel across the pond. “Glamour Profession” is a Steely Dan number, not that I would have known this without the guidance of the sleeve notes. Henrik gives it the West End theatre treatment which he’s so good at. It’s a funky, sophisticated, catchy song which is ideally suited to Anubis Gate. I’m rapidly coming to the conclusion that if a song’s not in the Anubis Gate style, they can’t do it justice. Unless it’s by Japan, that is. This one is in the style. “Glamour Profession” is alive. This one had me searching again for the original. Donald Fagan does it better with that distinctive vocal, and it’s funkier, warmer and instrumentally richer. Totally cool. Anubis Gate’s is 80% cool. Do it again, Donald (no, not that one). So, my latest theory is that Anubis Gate know how to choose great songs but don’t know how to improve on them.

Now it’s time for the Beautiful Ones. This section starts with “Entangled”, a sensitive calming pendulum of a song on the Genesis “Trick of the Tail” album, to which Anubis Gate do justice with lovely acoustics, powerful clean vocals, emotive hooks and a big solo. But the Genesis version has more magic and imagination. I love theirs. I like Anubis Gate’s. Still next up is Coldplay’s “Atlas”. They can’t go wrong. I can’t stand Coldplay. I have nothing against the band. I just don’t like the songs. I don’t doubt the worthiness of “Atlas”. I just think it’s boring. Anubis Gate give it the prog metal treatment, and it’s a whole lot better. I still don’t like the song. More rousing is Mike Oldfield’s “To France”, the first of Eighties Corner, but then it’s hard not to be after bloody Coldplay. Henrik seems to be struggling with vocals on this one. Another big miss for Anubis Gate, I’m afraid, as the original featured the lovely folksy vocals of Maggie Reilly, plus the rich instrumental mixture that Mike Oldfield always brings and Anubis Gate don’t. “Fade to Grey” comes and fades away – actually, played loud it’s got a bit more oomph but it’s still not a patch on the original – and for something completely different, Ozzy’s “S.A.T.O” is next. A point to Anubis Gate here. Ozzy has his personal style and the song’s fine but this is an improvement all round. It’s more powerful, and there’s an edge to Anubis Gate’s version of this classic piece of rock n roll.

No, they didn’t. Oh yes, they did. I guess that’s what we’re supposed to think as we head into the last section. Now we’re talking. This cover of Slayer’s “Aggressive Perfector” is exciting, tantalising, progressive. Finally – it’s an improvement on the grainy thrash of the original. I’m not a great fan of AC/DC, and “Back in Black” does nothing for me with the whiny arena style. Now as for Anubis Gate – this could take pride of place on any of their recent albums. There is drama and tension in the air. Henrik cries to the heaven. Strange voices can be heard. The keyboards create a mystical air. The energy level picks up. The song drives forward. This is Anubis Gate at their finest. The whistling wind takes us directly into the Beatles’s “Strawberry Fields Forever”. This came as no surprise as I knew Kim was a fan of the Beatles. To start it’s the same with some changes in the sound dynamic. Mid way, it stops and the classic song is played out to a dark instrumental, but hypnotising as it is, it doesn’t achieve very much in common with a lot of this collection. Less so the ending which was like a statement that the band had run out of ideas.

I acknowledge that there’s more subjectivity in listening to something like this than normal, as there are the variables of the appeal of the song, the original band’s interpretation and whether the interpreting band do it better or at least inject something of added interest. So, I commend Anubis Gate for doing this, and of course this is always going to mean more to them than it is me. It was always going to be disjointed with this kind of collection. It is however kind of demoralising when you hear the original and it’s better. Oldies like me may remember buying those 99p cover Greatest Hits albums as a child. It’s like that. It’s the songs but not as we know them. At least you knew that. So, having wasted your pocket money on them, you go onto the next stage of your life and spend your money on an album by a band you like. It’s exciting and that’s how I felt when “Covered in Colours” turned up in the post. The excitement turned if not to outright disappointment, because it has interesting elements, but to bewilderment. At times I found myself thinking what’s the point? Anubis Gate don’t systematically put their own trademark stamp on all this collection, which is fine but for me they’re best when they’re recognisably Anubis Gate. So are the brilliant “Anubis Gate”, “Horizons” and “Covered in Black” albums. Personally, I’ll stick to them. But at least it’s been fun and I have made some interesting discoveries along the way.