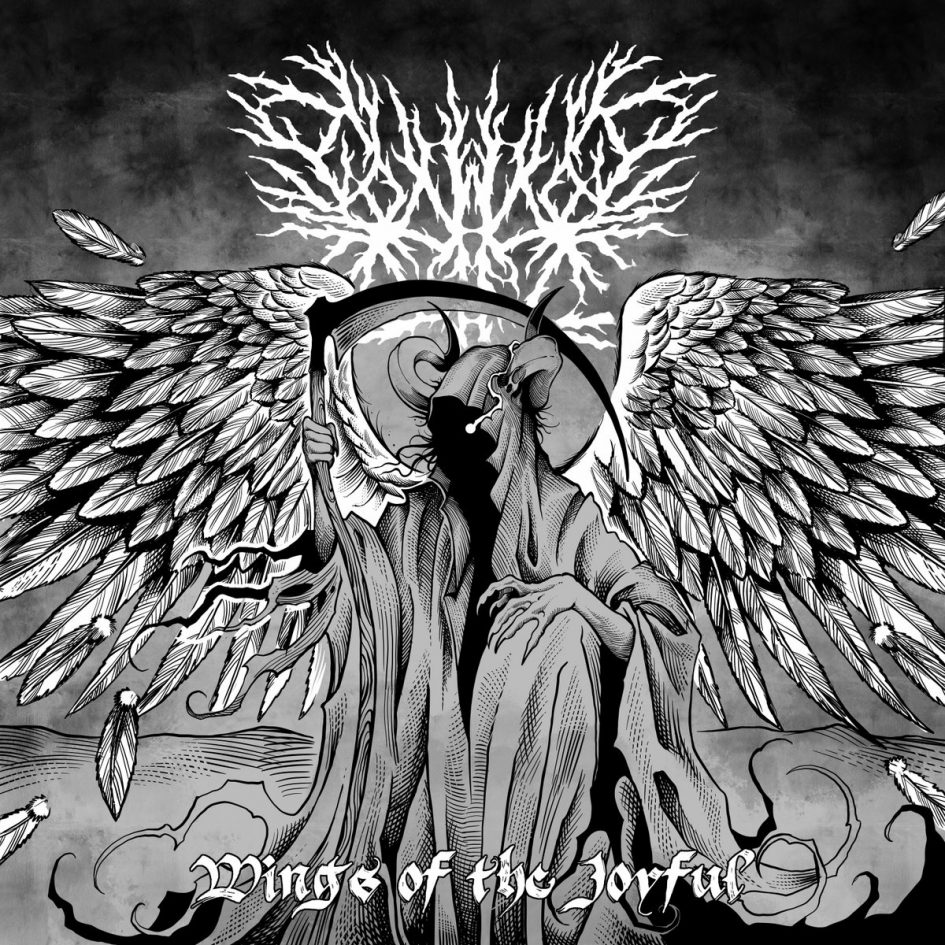 “I love neofolk and I love black metal, but I absolutely despise how both have become breeding grounds for hateful ideologies.”

If you are aware of this one-man Nazi baiting army you will know what to expect. 2018’s “The Black Metal Scene Needs to BE Destroyed” came out at a pivotal time for Anti Nazi and Anarchist extreme metal with Neckbeard Deathcamp making quite an impact in the underground and Dawnray’d and Underdark firing at the online boneheads and championing the working man with plenty of piss and vinegar.

The thing about sub sub cultures like the aforementioned group is that people read the articles online and see the shirts and slogans and dismiss the bands as “hipster” and opportunistic. I have seen an online backlash in the last 18 months against Gaylord and Neckbeard Deathcamp especially from trooer than troo KVLTer than KVLT edgelords with Graveland cassette collections.

Good. You are meant to be riled ya fucking bigots!

Wings of the Joyful is a more polished affair than “TBMSNTBD” (trips of the tongue doesn’t it!) but loses none of the delightful underground feel and poignant bigot crushing lyrics. Whether it is holocaust deniers on “Borne from Inferno Winds” or the rise of the Alt Right within Metal in “Devils From the Black” Gaylord will bear witness to the slow zombie amble to the far right.

So what is the music like? Well I gotta say it is pretty varied but all fucking excellent. As a big fan of “Dogma” to hear Alan Rickman as the Metatron bellowing out at the beginning of “Silencing the Voice of God” made my ears prick up before they were blasted with a thunderous sub 2 minutes of bludgeoning death metal with hellish vocals. Bloody wonderful. Some great groovy death metal on that track. Whereas “The First To Die” which follows the album’s intro “Red Wing, Dead Wing” is a massive chunky Black Metal beast with slight Viking overtones. Proper Norwegian gallops in there with little Satyr like guitar tweaks. For a one man band Weeks manages to give the feel of a large cohesive band of folk.  Devils from the black attacks the rise of the Right in a blackened death stylee and gets the feet a tapping with some wrist breaking riffage and furious vocals.

Hunger, meanwhile has a distinctly frosty and Gothic air switching from mid-paced orange squeezing to sloooow elongated gurgle of “Hunnnnngerrrrr” preceded by an Addam’s family style bassline. Great atmosphere building here/ Something that was missing in the previous release.

Borne from Inferno Winds opens with a rasp of “White knuckle Revenge” and launches into a vicious threat to Neo Nazi’s everywhere. Weeks has a pretty good operatic voice too as shown in the chorus – many an Italian power metal band could draft him in if needed.  The riffs on here are more thrashy and good for a good bang of the noggin whilst the lyrics attack the grey matter.

The Gothic theme continues into “Godless Universe” an instrumental that sounds like it could have come from the pens and strings of Messrs Eldritch, Adams and Hussey in 1983. In fact the main refrain is quite like a sped up “Some Kind of Stranger” .

“Thorns From Below” tackles the Dieppe Raid of August 1942 when the predominantly Canadian allied force attempted liberate the French port from German occupying force. The raid ended in failure and retreat with great casualties.  Without lyrics for this track I was quite surprised at Gaylord seeming to take on a historical battle but I suppose this was the ultimate in Antifa. The chorus is chilling and the music has the gravitas of a plunge into death for thousands.

“Odd” is simply great. A doomy, deathy, gothic chunk of metal that slithers into the ears like that parasite in wrath of Khan. Proper chunky bassline with massive tits or balls depending on your gender.

“Circle of Spears” is gargantuan. It just sounds huge. Simply crushing distorted riffs with ear melting drum bombast. Bit of a tech/industrial death metal, early Fear Factory feel to it and a great chorus. Gaylord know how to write a catchy tune as well as a poignant one.

The title track lies at the bottom of the tracklisting. It is a nasty sounding little bugger mixing clean operatic vocals and vile necrotic singing to great effect. Some delightful acoustic passages keep things mixed up and help create further ambience.

With “Wings of the Joyful” Gaylord have produced an album that manages to combine extremity, melody, crushing riffs and lyrics that let the bigots and homophobes of the world that there are plenty who abhor their vileness. Good on ya!