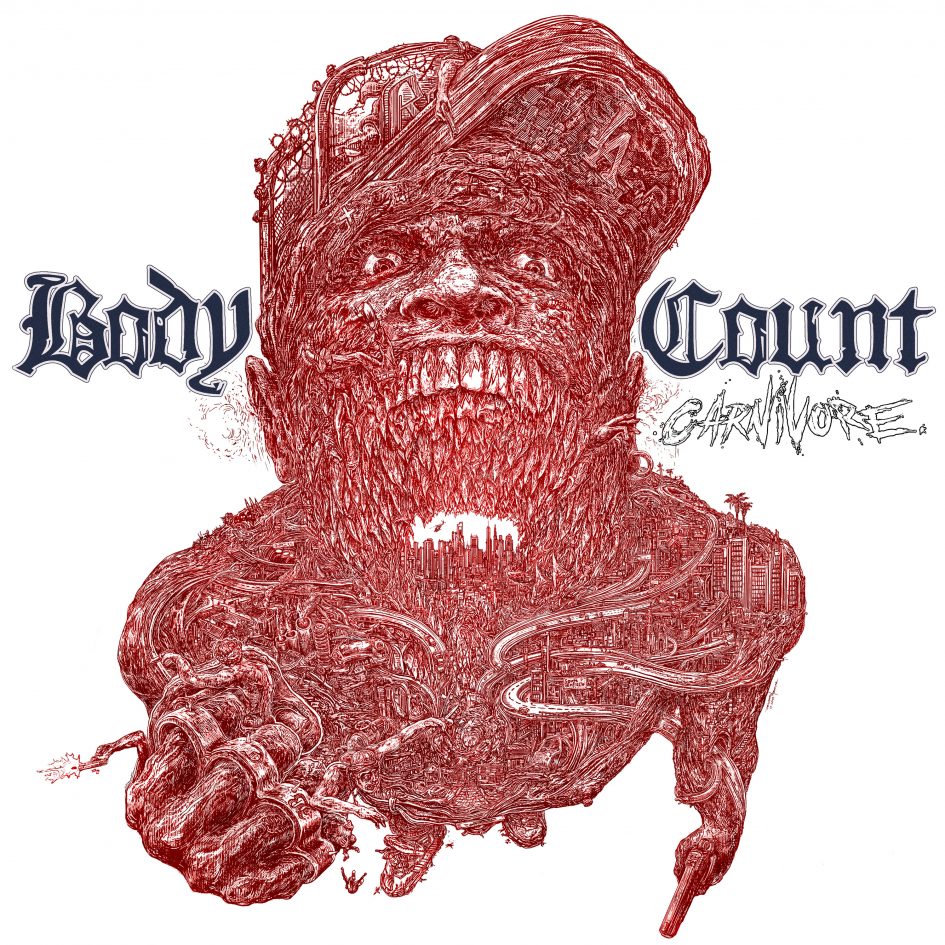 Many years ago now I went into a local record store and stumbled upon a copy of the 1994 Body Count album, Born Dead. I picked it up with great delight and noted the 90’s Death Metal looking artwork and thought ‘surely this must be good’. I put no more thought into the purchase and took the CD home. Imagine my horror when it wasn’t Death Metal as I’d expected but some form of Rap Metal. I was repulsed and quickly got rid of the album, at the time of me discovering it I had no time for Rap music, let alone Rap Metal. So, years passed and soon I became aware with age and experience that the Ice-T fronted band Body Count had quite the back catalogue and my ear became attuned to their sound. By the time I saw them perform at Hellfest 2015 I was hooked.

Originally formed in 1990 and of course with the aforementioned rapper Ice-T fronting the band Body Count rose to fame, or perhaps infamy? The bands self titled debut record would spark great controversy with the track Cop Killer, for obvious reasons. After a slew of not so highly regarded releases the band split. Only to reform again in 2009 and then put out a striking record in 2014 named Manslaughter. This was followed by the 2017 release of Bloodlust, an equally strong record. Now in 2020 via Century Media we are graced with Carnivore.

The opening title track is everything you might expect from Body Count. Big crushing Hardcore influenced riffs packed with Metal flare, pounding drums and catchy lyrics and the soaring rapping verses. The next track to catch the listeners attention is Bum-Rush which seems to have the same sort of ideology of tracks like Talk Shit, Get Shot and Bitch In The Pit with the huge ear worming repetitive lyrics and thriving clean cut riffs, a top track indeed. We them come to a cover of Ace Of Spades which as Ice-T reminds us in the tracks intro is a way of paying homage to bands that have influenced them. It’s a nice touch and much like the bands prior covers it’s actually pretty good fun. Another Level is also pretty catchy and features Jamey Jasta from Hatebreed, that fact I could live without, but as much as it pains me his contribution is welcomed and works well.

We then get a nod to Ice-T’s solo materiel with a Metal version of his song Colors in Colors 2020, it’s sadly one of the weaker songs on the album and pretty much serves as little more than filler. Then comes When I’m Gone which features Amy Lee of Evanescence fame, I can’t decide whether this combination is the most cringe worthy thing to happen to Metal in recent years or not, but I’ll tell you one thing I like it. It has a sort of nostalgic edge and one that I’m sure will resonate with others, particularly of my generation. The album comes to a bit of a sad ending with the final couple of tracks not really delivering and sitting as filler. The Hate Is Real is at least catchy, but it doesn’t have the same punch as prior tracks.

In conclusion I still stand by my often recited comment of ‘Body Count are everything Nu-Metal should have been’. They are the perfect melding of Rap and Metal, the influences the band draw from on both sides work so well together. Basically what you end up with is Hardcore, but Hardcore that amps up the more gangster edge. I’m a fan of this band and have fallen from the irony of enjoying them to just thinking that they’re actually great. The band are a ton of fun and the sort of band that will be guaranteed to impress anyone who doesn’t know them. Especially given their memorable nature, Carnivore is much the same and stands out as another fantastic release from these underground titans.