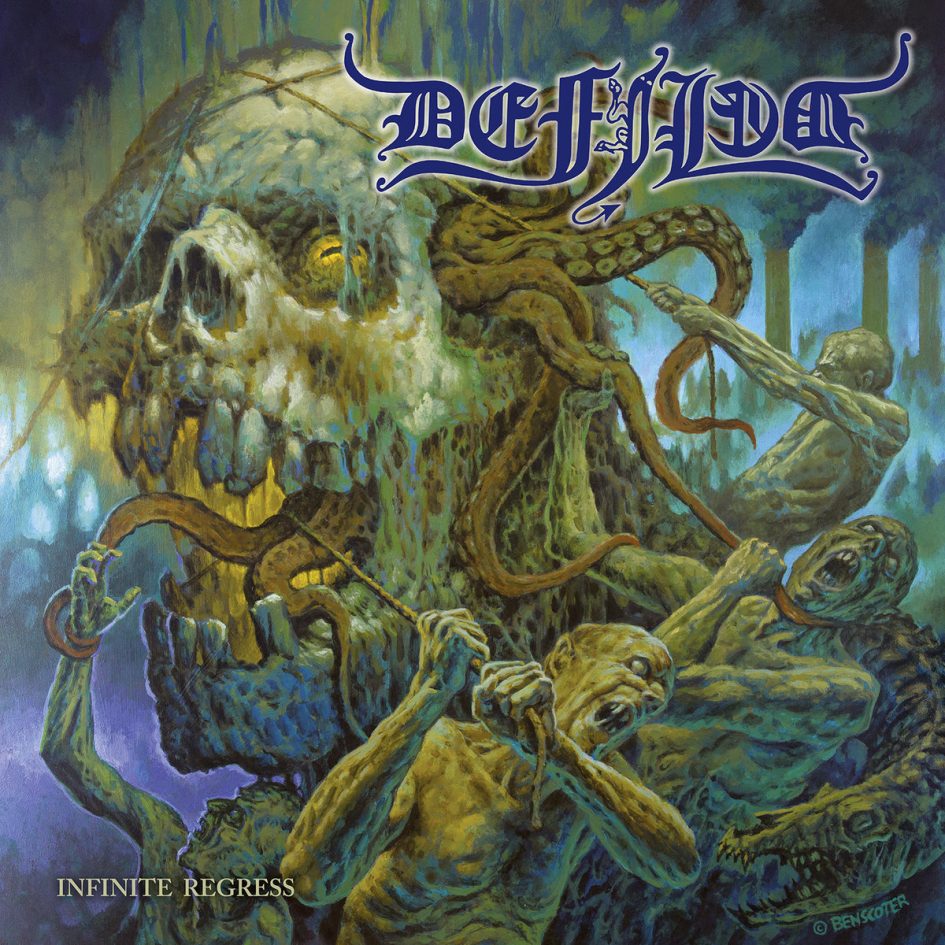 I initially thought that this Japanese band was familiar to me only to find that I have not heard them before but after this album I will be checking out their back catalogue. This album captures the essence of brutal death metal but incorporates other genres and like Frankenstein’s monster those genres act like the limbs and torso and head to assemble an album I can only sum up as frankengrind such is the plethora of styles deployed. After the noisy intro with spoken vocals the album launches with “Divide And Conquer” and immediately the sound is raw, unfettered by tricks as the song produces a machine obliteration via the drumming which works superbly.

“Tragedy” is immense, as a fade in of lead guitar gives way for the riff insert and crunching deathly assault. The pace has a doom death asphyxiation producing a build-up sequence that is infectious as the speed steadily increases, gathering momentum ready for the inevitable blast which is callously executed. The brutalising deathliness juts in as the gruesome vocal emanations lead into some groove infested riffing that has a borderline thrash base. “Systematic Decomposition” is maniacal with its machine gun drum blasting swerving every now and then to straight up grinding ferocity, especially with the riff breaks and accompanying speed surges.

That grinding tendency continues into “So Blind” and “Legacy” where each short track produces a frenetic and chaotic structure that is absolutely insane. As I suggested in the first paragraph this album blends multiple genres into what I term frankengrind and “Centuries” is testament to that metaphor where the slow sequential build towards the fantastic riff change will have you hooked as the incessant speed hits grind realms with consummate pulverising panache. The song devolves into primeval 80s bedlam that I kid you not hints at an old Hellhammer riffing structure or even early Celtic Frost; tell me I’m wrong when you hear it.

Blurring and bludgeoning “Aftermath” has a deathly sadism that lays waste with its manic tempo changes and deluging riff changes that I found completely captivating with the pandemonium surrounding them. Half blasted and uncompromisingly devastating “Ignorant” has a wealth of riffs splattered into the track, creating a technical death metal annihilation as “Slaverobot” shifts their deathly style to a more Floridian style of the early 90s, like Malevolent Creation to be specific. Grisly and exponentially gruesome is the title track which closes the albums track before the outro. The creepy riff and tone is excellent as the double bass charge barrages into the tune right before the snapping riff change and velocity surge where that machine gunning blast works to enhance the savagery.

Saturated in melody and drenched in hostility this belligerent and scathing album captures the bludgeoning nature of death metal with the venomous velocity of grind and the violence of primal thrash to unveil a corrosive and wholly murderous album.