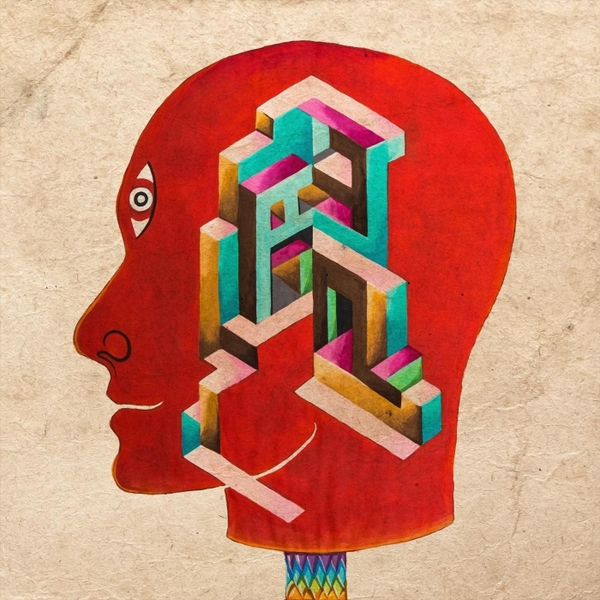 German Progressive Rock quartet Echolons))) formed in the early 2000’s in Frankfurt Am Main and have a different approach to the one I prefer when it comes to the music they create on the Progressive Rock spectrum. Whereas I usually prefer my Prog to lean more towards the metallic side of the spectrum, Echolons))) instead lean more towards the alternative rock and post rock side of things. Think 80’s era U2 meets Porcupine Tree and Muse with some of the more spaced out and pseudo-desert vibes of Incubus and French alternative rock outfit Klone. It’s a rich mixture of overlapping melodies, intricate arrangements, massive and dynamic soundscapes and very infectious melodies. Quirky effects, crisp overdrive, bright tones and some slightly heavier moments all work together to create a solid foundation for the thought-provoking lyrics. It’s certainly an appealing musical prospect and worth stepping out of my comfort zone for, so let’s step into the Labyrinth and try to find our way out.

“Leaving The City” opens the release and from the start you can see just how much thought and effort has gone into the composition of the track. It is intricately crafted in a way which means all of the available space is utilized to its full potential. The clean guitar lines, piano arpeggios, rich bass, gentle drums and soft and expressive vocals dominate the foreground but the way it all trails out and the additional synth and sample elements fill the background in such a way that it is highly absorbing and draws you in effortlessly. The simple repeating melodies, big string arrangement samples and steady pulse has a relaxing and hypnotic effect and in places you can even hear that Pink Floyd vibe. It is executed well and the atmospheric impact is spot on!

“Labyrinth” is next and it picks up the pace. A vigorous pulse with intricate drum fills, warm bass lines and intricate melodies that flutter about bringing the track to life and the way the music surges for the big chorus thickens things up, giving it a fuller presence and sounding rather similar to Klone, another post-rock/prog leaning band. With its contained but expressive flow, it certainly lives up to its name, taking you along a complex and challenging musical journey. “Act Of Balance” follows this one and for me it is probably the stand out track of the release. Starting off with a tempo and feel which would not be out of place on some electronica tracks, its energetic flow combines well with the melodic elements in the intro. Yet again the synth elements and the bright guitar tones dance about with ease and the way they compliment the smoothly delivered vocals is rather good. With some good dynamic shifts, it helps build up the suspense in the track’s atmosphere, helping guide in massive sounding moments which really shine. It progresses smoothly, subtly shifting through different phases with ease and maintaining its hypnotic, hook-laden feel throughout. Come the final section of the track, it explodes to life, becoming more urgent and the ascending and descending sequences complement the more frantic drumming and twisting bassline, rounding the track off in a spectacular fashion.

From here, it feels like the bar has been set maybe a little too high with regards to the standard and feel of the previous track. Whilst the remaining tracks are executed well, they just don’t seem to reach the heights of “Act Of Balance”. Case in point; “Prism Is A Dancer” has to follow on from that performance and whilst it has shades of the early/mid 2000’s Dream Theater, it doesn’t seem to keep the momentum the previous track generated. The heavy sequence towards the end of the track works well and shows that Echolons))) aren’t afraid to crank up the gain and dirty their sound a little, but it feels like more thought was given to the lyrics than the music. “Midwater” is a unique track which is full of surprises. The opening and closing samples of breaking the surface of the water, submerging and emerging are rather clever and the way the music surrounds you plays along to this aquatic vibe. There are some interesting vocal harmonies in the track and the real crisp and bright feel from the guitar, along with the subtle organ augmentation really lifts the track in places. It comes close to “Act Of Balance” but it just can’t surge past it. The final two tracks, “Questions Never Asked” and “Science Of Sleep” round the album off in a solid manner but again, they just don’t hit the highs of the stand out moments. Yet again, the composition on both tracks is tremendous. The meticulous arrangements, subtle layering of melodies and flow and pacing works as intended and the delivery does hit the mark, it just doesn’t seem to have that ‘spark’ needed to make it shine.

In all, “Idea Of A Labyrinth” is a great release. Whilst it isn’t my preferred style of Progressive Rock, it certainly delivers on what it sets out to do. The more alternative and post-rock influences in the sound make it a little more interesting and help with its unique listening experience. The clever use of Hammond organ spots throughout the release to help lift sections and augment the sound of the guitars is executed well, the clever and nimble guitar and drums keep things going and the vocals, highly expressive and clear, help dictate the pacing, tying everything together in a nice package. The only thing I can really criticize about this release is that at times, the vocals could do with a bit more variety in them and there could be a few heavier moments or something else needed to give it some bite, but gripes aside, this is one maze I would revisit again!