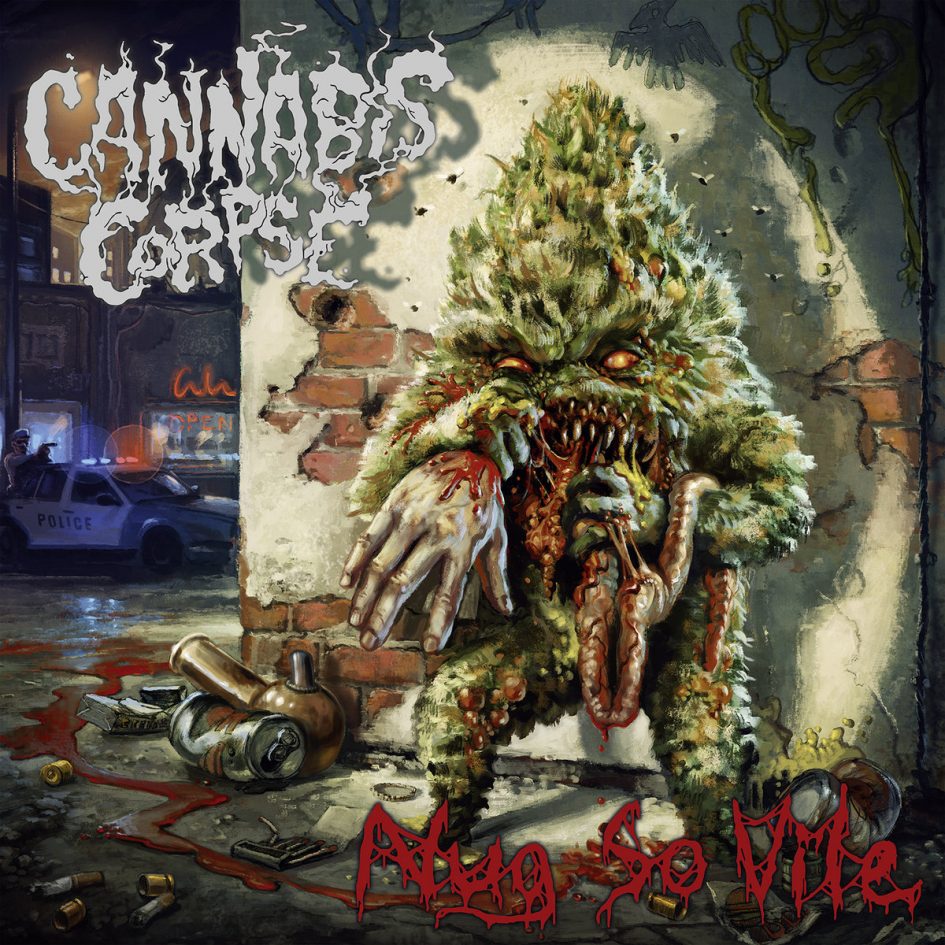 I’ve always been a bit of a fan of parody in film, Austin Powers, Kung Pow, Dewey Cox all heavy hitters upon my list of top movies of all time. But we’re not here to discuss the silver screen, we’re here to discuss music. For a time I had a huge distain for parody in music, I found it cheap, tacky, embarrassing and frankly sickening. Indeed there are still nods to this that I uphold my disgust, for example Death Metal covers of Pop songs. I’ve matured like a fine wine and now I can see the funny side of most things (with the exception of Lawnmower Deth whom I will never understand). In fact I’ve learnt that music doesn’t always need to be super serious, and in turn it has helped me get a lot more into Goregrind and the general silliness of bandcamp-style artists such as Coffee Decaffeination and The Ogre Packet Slammers (check them out).

Our subject for today are the weed themed Death Metal parody warlords Cannabis Corpse. Formed in 2006 as a side project from Municipal Waste’s Land Phil the band initialled parodied Cannibal Corpse alone and then progressed towards other Death Metal giants. Debut Blunted At Birth from the same year as their inception and its follow up in 2008 Tube Of The Resinated were highly praised (pun intended). My first introduction to the band came from the 2009 EP The Weeding which I merely shrugged off as ‘okay’. Yet when 2014 came with From Wisdom To Baked I was totally captivated and then saw that the band didn’t just write silly songs, they wrote them well. Now in 2019 we usher in the bands sixth full length Nug So Vile (a play on the legendary Cryptopsy album title None So Vile), it comes through Season Of Mist and promises more marijuana based slaps of Death Metal might.

Opening proceedings is a Krisiun inspired track entitled Conquerors Of Chronageddon. It’s a fairly standard track which is fast paced, crushing, old school yet with an added flare that makes it well rounded and solid Death Metal. Then things take a turn during the title track whereby the band play with obscure drum patterns and riffs in a sort of Old School Tech Death manner, it doesn’t work all that well and feels a touch confused. Blunt Force Domain lets go of the majority of Tech in favour of solos which work much better and bolster the purist might of Cannabis Corpse. Indeed it is their dedicated ethos to the genre which is a credit to them, this is the true definition of music by the fans for the fans. Cylinders Of Madness and Blasphemy Made Hash serve only to prove that whilst well written the album is lacking in memorability save for cleverly punned song names.

Crossing the threshold between the two halves of the release is Cheeba Jigsore Quandry which if nothing else has a wealth of fitting Carcass influenced riffs, a polite nod to one of the genres titans and an all round inoffensive Death Metal number. Edibles Autopsy highlights the powerful vocals perhaps the best out of any track on the album, they are always traditional but mix things up between low and high for a decent and enjoyable range making them more than illegible grunts. In fact it is this track that is among one of the strongest in terms of memorability a real throwback to the bands earlier works that ooze with catchy lyrical content. Sadly the remaining tracks fail to land with the same excitement and thus tail off into standard Death Metal that whilst well performed is a bit tiresome.

That is indeed the biggest factor when it comes to Cannabis Corpse, well performed Death Metal with little to show for it save the odd song of occasional album. This release reminds me of my first listens to Beneath Grow Light Thou Shalt Rise. By which I mean that it’s entertaining but seldom holds my focus. It must be said that what Cannabis Corpse have achieved from such a simple idea is nothing short of astonishing. I remember their early works being released and thinking that the band wouldn’t last long, how wrong I was. For the odd gem that does hit among their discography their longevity is welcomed also.