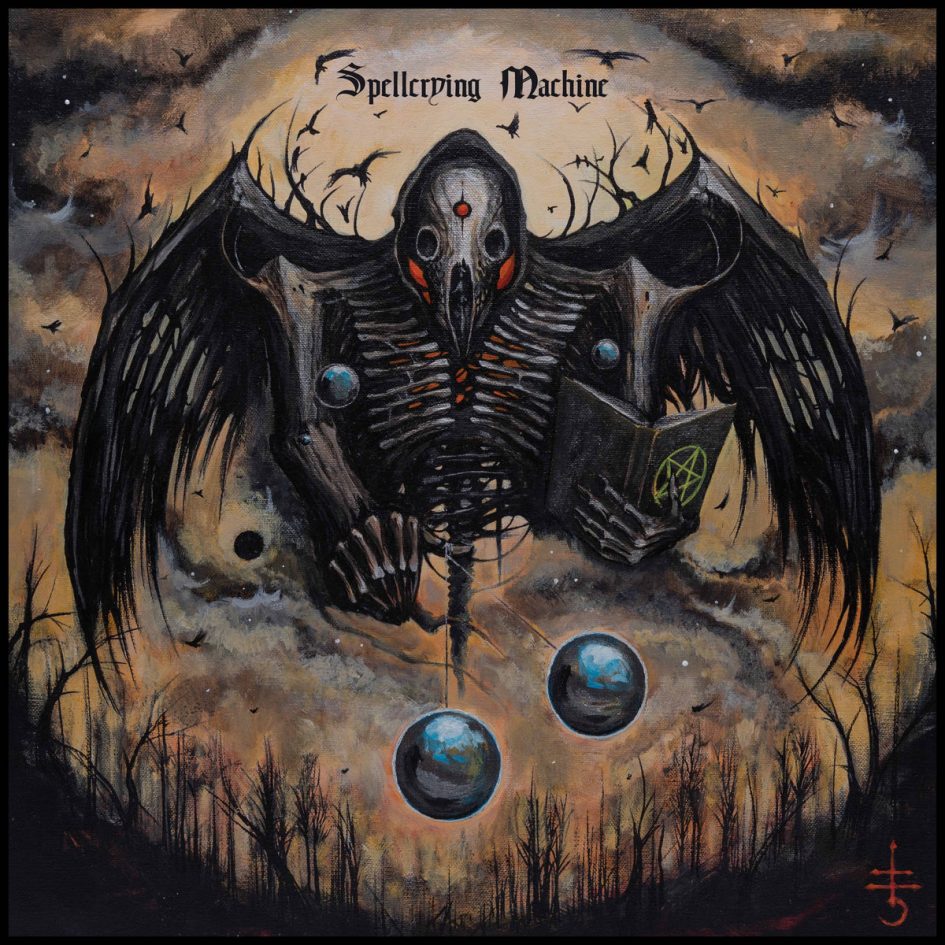 Belarusian duo Essence Of Datum are the latest in a long line of progressive metal acts to release an album in 2019. They find themselves amongst the likes of Queensrÿche, Rendezvous Point, Ascend The Hollow, Mother Of Millions, Dream Theater and of course, the all-mighty TOOL. With the standards these albums have set, there is certainly a level of expectation regarding the quality, substance, delivery and the like, and whilst it might seem unfair to judge the relevancy of one band’s material to another band’s material when they might inhabit different realms of the progressive spectrum and therefore have no bearing on each other, it is ultimately what we do when we write about each release we get.

Minor philosophical ponderings aside, Essence Of Datum have offered up their latest work, “Spellcrying Machine”; the latest instalment in their musical universe and it shows the world which they had created in their previous two releases is now a post-apocalyptic ruin. With a darker edge and a more synthesized approach in places, it points to one of the common tropes of technology taking over and everything being bleak. With no vocal/lyrical element to elaborate the story, the music has to convey this scenario so let us see what the future holds in this magical machine.

With a darker theme to the album, the musical content is a lot more intricate and it heavily borrows from the borderline death metal realms, in particular; Fusion style a la Cynic. Technically sound and rhythmically tight, the release is a 7 track, 40-minute demonstration of creativity and execution to a high standard. The polyrhythmic currents underneath the exotic and precise melodic arrangements, the subtle shifts in ambience and dramatic flurries of activity and intensity, it all works together to create a highly detailed and absorbing recording.

Opening track “Synthetic Soul Extractor” has exotic sounding, dissonant arpeggios which transition into fusion-esque leads with minimal fuss. It lacks a melodic or rhythmic ‘hook’, but it more than makes up for it by constantly evolving as the track progresses, giving rise to a rather intense and dramatic finale.”Shikari Algorithm” favours a more melo-death approach by employing numerous pedal-tone motifs which are delivered with a high degree of precision and a surging pace. Heavier on all fronts compared to the previous track, this musical sequence hits hard, hits fast and does not relent! “Pendulum” tends to lean more towards the refined progressive metal style which Dream Theater favour; a strong groove-laden undercurrent with plenty of intricate fills and leads. It has defined sections which point to a highly structured and compartmentalised build and much like its namesake, it swings back and forth between these sections at set intervals to give the overall sound, feel and edge to the track.

With the opening trio of tracks there, it sets the musical theme for the album in how it is delivered. Be it more extreme leaning and intense, or exotic and hypnotising, it is a highly intricate approach which does not give much in terms of a reprieve as even in the calmer moments it still oozes complexity. “Vitality”, the middle track of the album is the curve ball. Dark and atmospheric acoustic guitars permeate the entire duration of the song and just on the technique and delivery alone, it is hard not to compare it to the acoustic prowess of Annihilator’s Jeff Waters. The percussive effect of the playing adds an extra dynamic to the haunting feel of the track and the lingering effect of the dark melodies is superb. This is probably the best musical moment of the release! From here, it returns to the previous styles. “Spellcryer”, “Binar” and “Cavum Atrum” bring back the balancing act of extreme metal influences, exotic composition ideas and solid structuring. There are atmospheric moments where the bass shines or the synth elements add that extra dimension to the sound but for the majority of it, the guitar and drums dictate the pacing and the overall feel.

In all, “Spellcrying Machine” is a solid instrumental effort. It has a decent runtime so repeat listens are easy enough, especially as it is easy to lose track of where you are in the release at times, a problem many complex albums suffer from. Other than that, there is little fault to find in this Belarusian Progressive Metal duo’s latest work. “Spellcrying Machine” manages to successfully blend in the more extreme metal influences and elements with the traditional Progressive Metal foundation they use and it shows how a vocalist isn’t always required at times. It is a good album, but it doesn’t quite measure up to some of the big Progressive Metal releases already out this year!