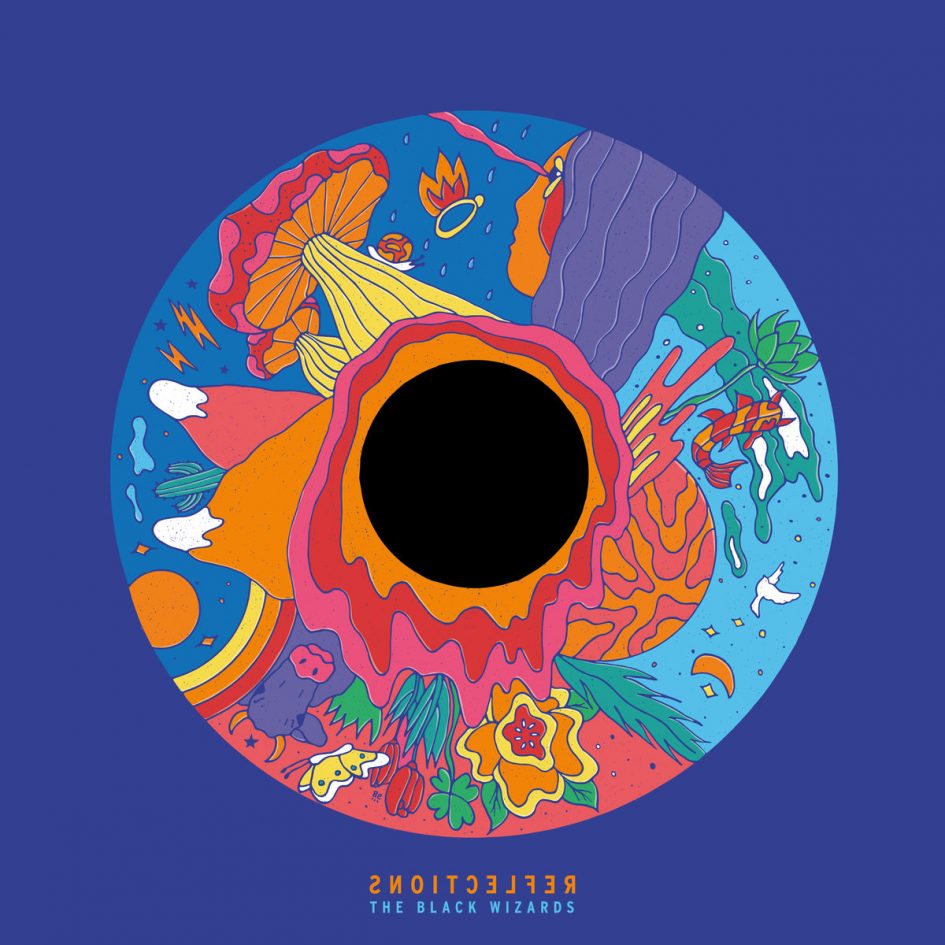 Damn this modern life for making me have to have a job to pay my bills! Why can’t I be like that Swedish chap who made the news a couple of years ago when he got state benefits to go to concerts and concessions at work as his love of heavy metal was considered an addiction, and thus a medical condition? If that were the case, I might have had time to listen to all the music I want to, and would have heard of The Black Wizards before now as opposed to arriving at their sound only when they already have two full length albums and an EP behind them. Moaning over, and onto this Portuguese four piece’s new work ‘Reflections’.

The album opens in pretty damn fine style with ‘Imposing Sun’, Joana Brito’s siren vocals soaring though the fog of fuzzy guitars and thundering rhythms with a clarity and power that would rival a young Grace Slick; indeed, the whole sound of the band is clearly in debt to the early years of that psychedelic legend’s time with Jefferson Airplane, and it is all too easy to imagine the band clad in beads and kaftans as they rocked out to the background of a liquid light show. This style is firmly cemented in follow up ‘Outlaws’, the initial frantic rock beats slowing down mid song into a mellowed out acid jazz jam, but managing to avoid the full on Grateful Dead overlong improvisation, and instead maintaining a coherent structure. All things hippy are explored in ’56th Floor’ with a tribal cum tabla like percussion leading from the start, the twin guitars ranging from the rocky to a sitar like plucking, and vocals that go from the insistent to mellow, in a journey that distils the years of the “Haight is Love” scene into a four and a half minute track that has the hooks and immediacy to reach far beyond a small niche scene and in an ideal world, into general circulation.

This surprising accessibility is even more apparent on ‘Starlight’, a number that back in the day would have been as equally at home in a smoke filled blues-jazz club as it would in an underground happening; hell, if it had been offered as a package to the likes of Amy Winehouse to deliver a few years ago I’ve little doubt it would have been racking up the sales in the pop charts. Worry not though, as things quickly return to a full on tie-dyed psyche rock out with ‘Symphony of the Ironic Sympathy’; deliver this number at the ever growing Freak Valley Festival, and the crowd would lap up every distorted note with as much concentration as the hovering clouds of THC would allow. If the same live set followed with the next track on the album, the crawling ‘Soul Keeper’, then the band’s return invitation would be ensured; every element of the song comes together to reflect that time of musical development back in the sixties where fusing disparate parts of rock, blues, jazz, emerging electric instrument technology and a willing to experiment in new and less rigid sounds lead to a whole new movement, and one that is kept alive today by a host of bands such as Kadavar and Blues Pills who want to recreate that vibrancy.

The Black Wizards are a band that has clearly honed their skills listening to a welter of classic acts, and adding to it their own undeniable musicianship and enthusiasm, melding it all together to produce one the most mellow albums I’ve heard all year, but with enough hard rock offerings to have an audience shake itself awake and move to music as opposed to just sinking back and letting the gentle waves of ‘Reflections’ wash over them.