Gruesome, Beyond Salvation, After The Abduction, Frozen In Shadows, Existential Dread – Manchester, Star And Garter 31/7/19 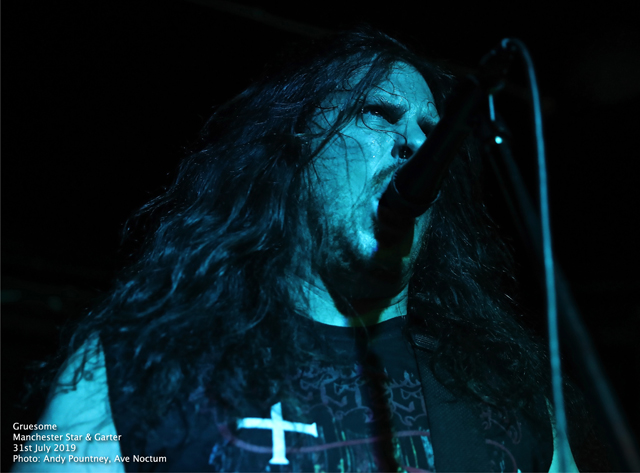 The older I get it is interesting to see how music and genres have evolved over time as tonight’s bill covered a range of death metal acts from traditional “old school” to the more modern slam style, and although these two ends of the spectrum still fall under the death metal banner, they are worlds apart. Opening the bill were local slam heroes Existential Dread where the vocalist prowled the floor while two “slam ninjas” (I’m being polite) did their thing down the front. The band battered through their short set, full of riffs, breakdowns and screeches and blew the cobwebs of those who had made their way down to the venue early. I’d seen local act Frozen In Shadows earlier this year when they supported Jungle Rot at the same venue but wasn’t too impressed with their brand of melodic death metal spiced with a splash of thrash. Second time seeing them and my opinion has improved marginally as the vocalist also had to stand in front of the stage due to the limited amount of space afforded with there being two drum kits. Pulsing with vicious riffs yet embellished with a plethora of fine hooks the band were certainly better, though I do feel they need to work on the lead breaks as they came across as strained which might have been down to the sound which whilst thunderously loud did lack definition on the instrumentation. Be that as it may they had a healthy following from their fan base and did a fine job in stirring up the crowd. I was anticipating another local crew, After The Abduction, to really turn up the power and brutality which to be honest they failed to do. Whether it was the sound or mix they had, they just seemed to be firing blanks as their tech infused assault was splattered with lead breaks and hooks that just didn’t create the impact required. However the drummer was a whirling maelstrom, playing his kit as though demented as the guitarists certainly had the chops to demonstrate why they had a decent following but overall I found their set lacking the energy and power that death metal has to be. I was not familiar with Beyond Salvation, another local band, but I will certainly rectify that after their exhilarating performance.  For some reason they had a much clearer and crystalline sound as their brand of thrashing death metal was wholly energised as they capitalised on the ever increasing numbers inside the ridiculously sweltering venue. The deluging riff changes accompanied seismic shifts in pace as songs like “Scarbearer” and “Savaged” inflicted sonic damage on the audience as the band members utilised the stage proficiently and to great effect to catalyse action at the front. By far the best band of the local acts Beyond Salvation really increased the potency. As far as I know this was the first time Gruesome had played the UK, though this was my fourth time having seen them previously in Holland twice and the Czech Republic, as they made a point of stating that this was the first time they’d played in Manchester. Despite all the supports receiving hearty appreciation from the crowd it was clear that the gathered sweating masses were here to see Gruesome as the venue filled up and people sorted themselves out to see the stage which is very difficult as it’s not a high one. Me, I stood on a wooden shelf on the right side so I could actually see what was going on as the band launched into “Inhumane” as the lack of a pit was rectified as soon as I had noted there wasn’t one. Thankfully the venue had turned off the room lights something they didn’t do whilst the supports were on for some reason. As the pit threw itself around expending energy and splashing sweat about they careered into “A Waste Of Life” where the step up in quality and power was exponential. Typically there was plenty of guitar posturing from the band members as a pause for the obligatory disclaimer stating that, and to paraphrase, we are a Death tribute band, after giving thanks for us turning up. Anyone who likes Death should love this band whether they’re a tribute act or not as whilst they write their own songs in the vein of Chuck and the boys from years ago the sonic pulverising Gruesome blanketed the crowd with was utterly their own.

“Forces Of Death” was brutality personified as they shifted gear momentarily for “Twisted Prayers”. The bludgeoning riff breaks were clinically executed as impetus was retained for “Dimensions Of Horror”. True enough this band sound completely like Death but when you get such accomplished guitar work amidst the devastating drum display the result was riveting indeed. Every single song played was old school death metal as it should be, as the density of the sound was amplified for “Closed Casket” after which there was a brief chat about the next song being about cannibalism and they’re taking us to the “Savage Land”. By this point I’d run out of superlatives to describe their aural butchery as they played their namesake song, “Gruesome”, before which the vocalist told us they would not be playing “Pull The Plug” (a Death classic), which they’ve played previously on other tours, to some disappointed groans but instead played “Born Dead” which I was very happy about. I expected this to be the last song and made ready to vacate the premises as the singer asked if they had time for another one, which they did and shot into “Trapped In Hell” though I did decide to head off as the closing cover really was a fitting finale to their show. 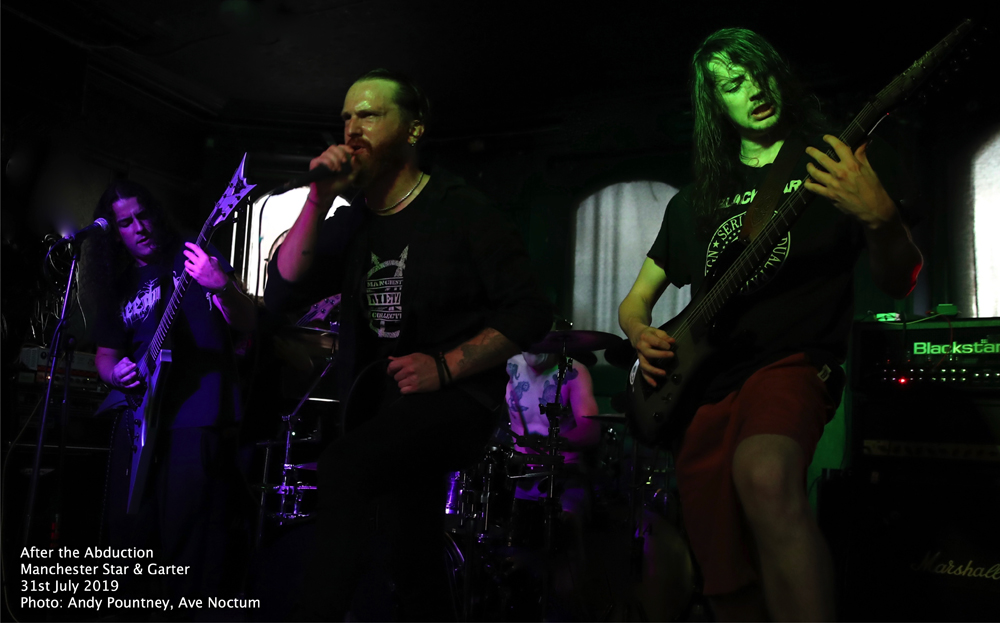 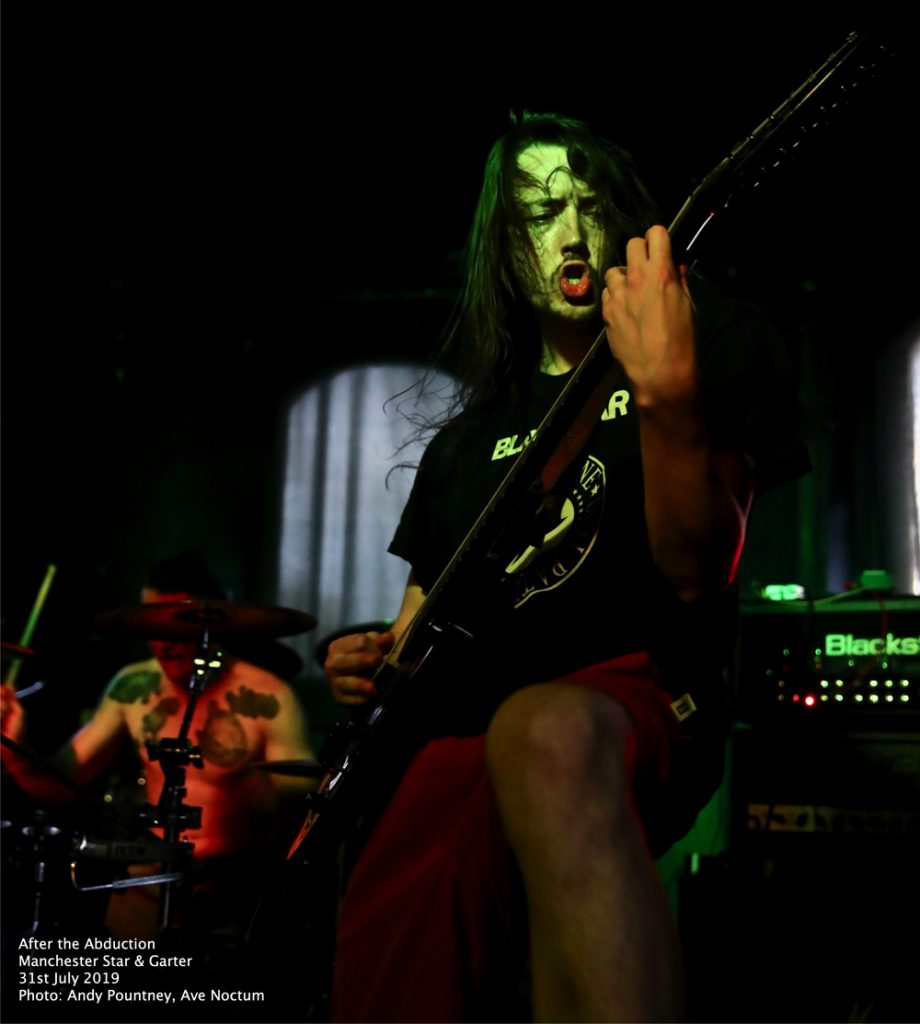 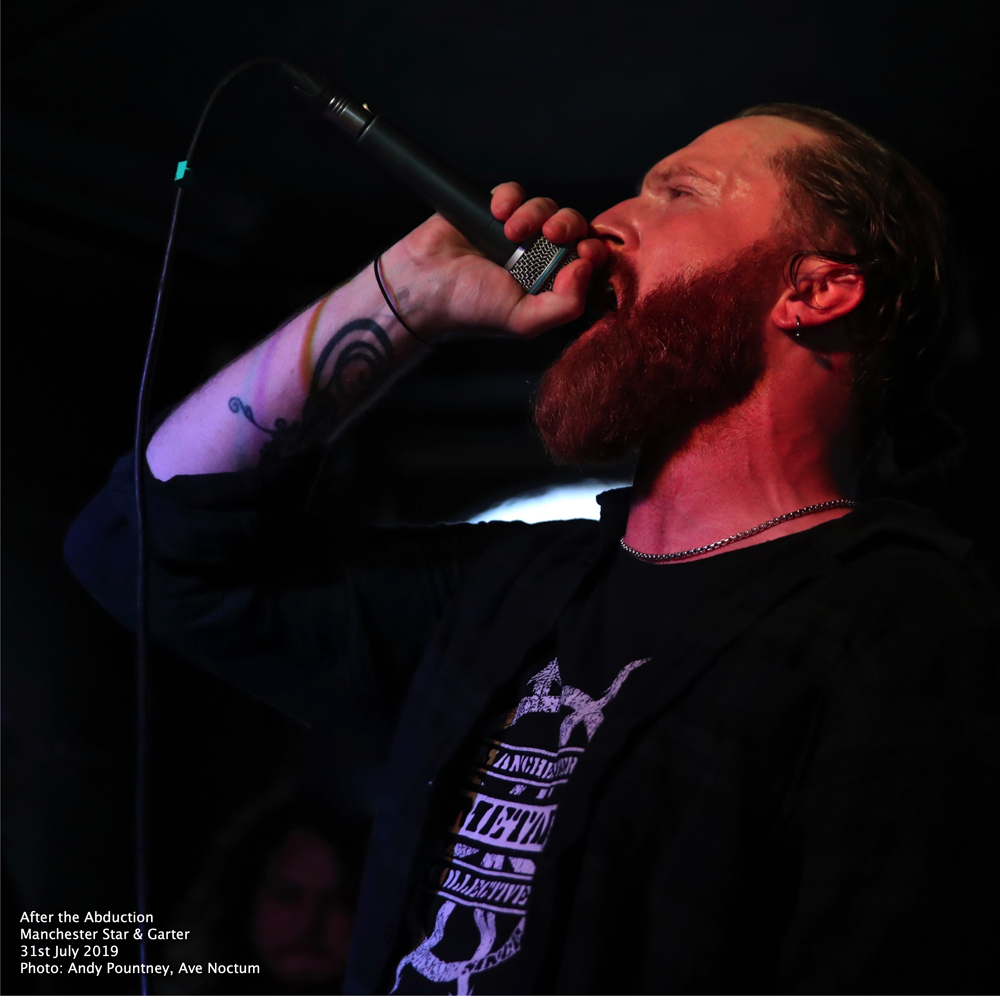 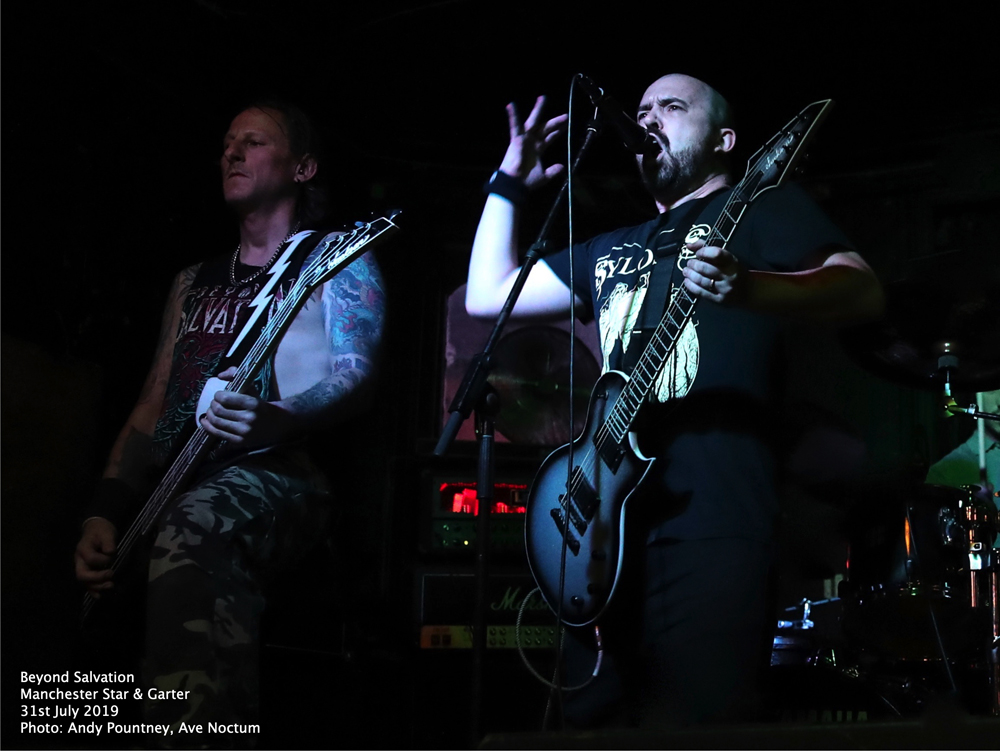 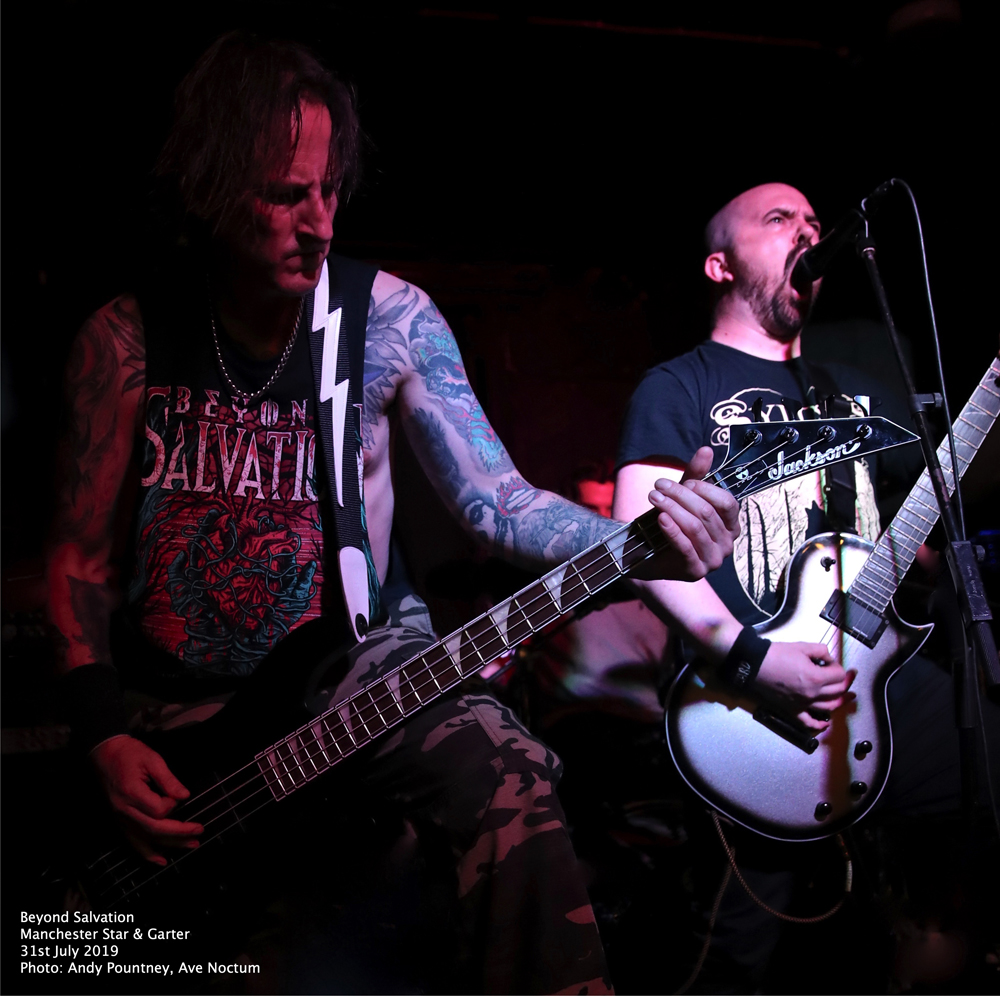 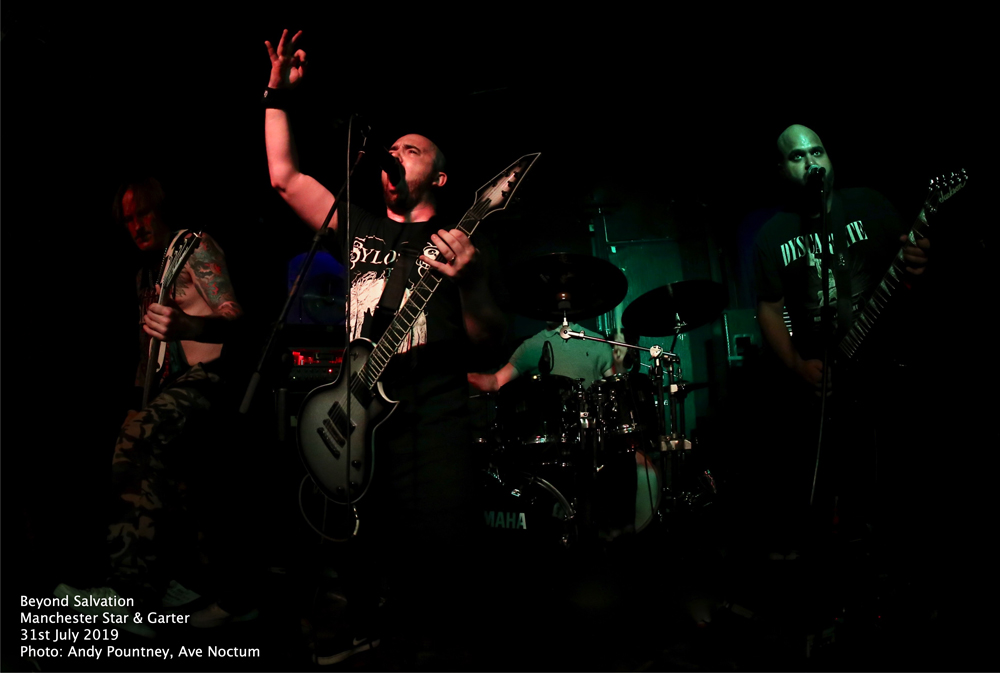 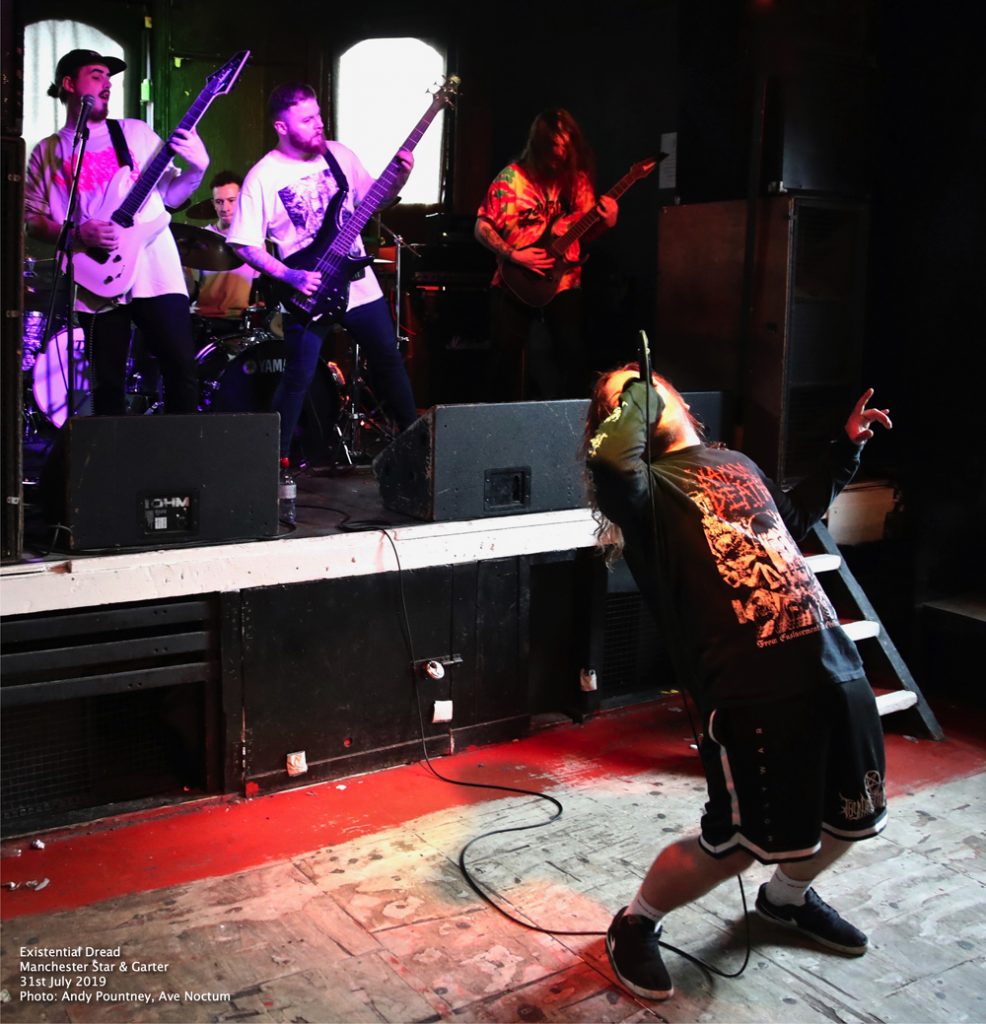 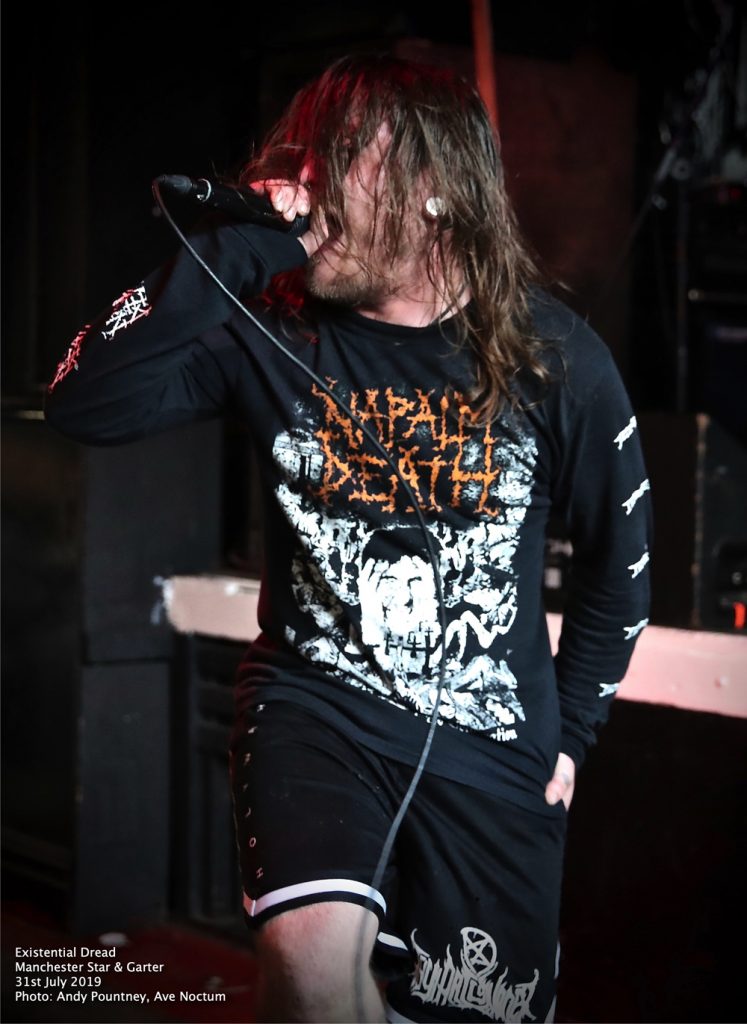 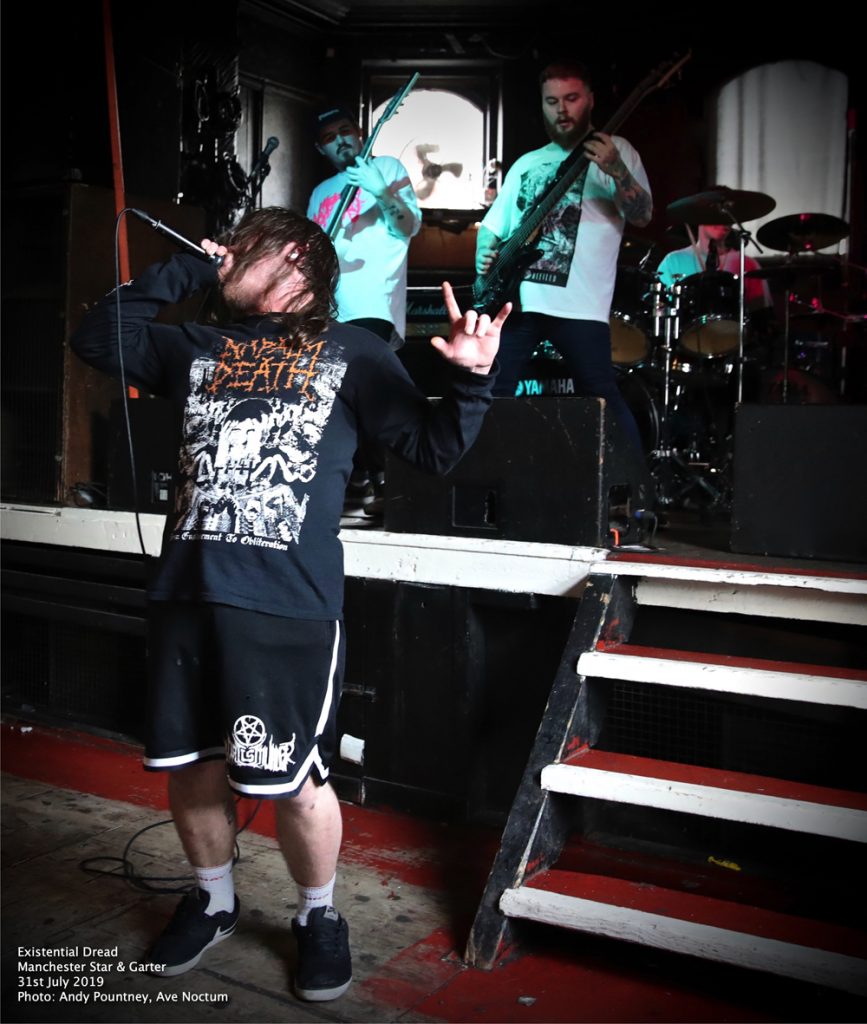 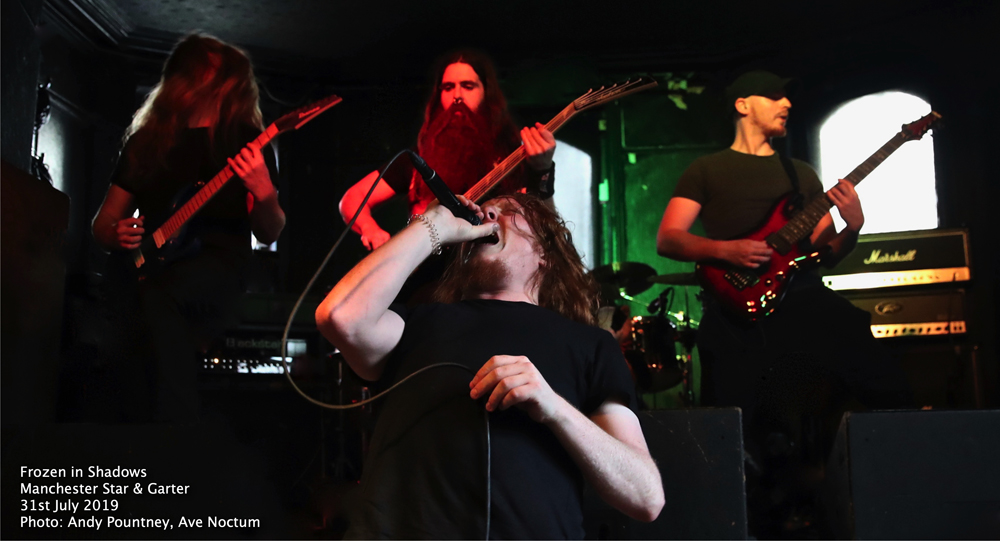 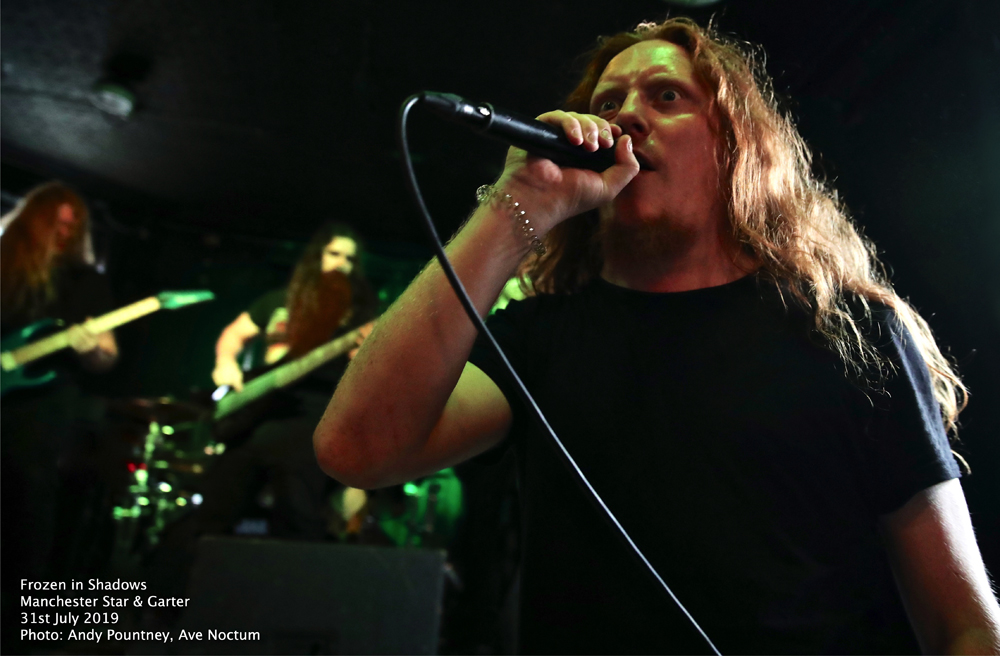 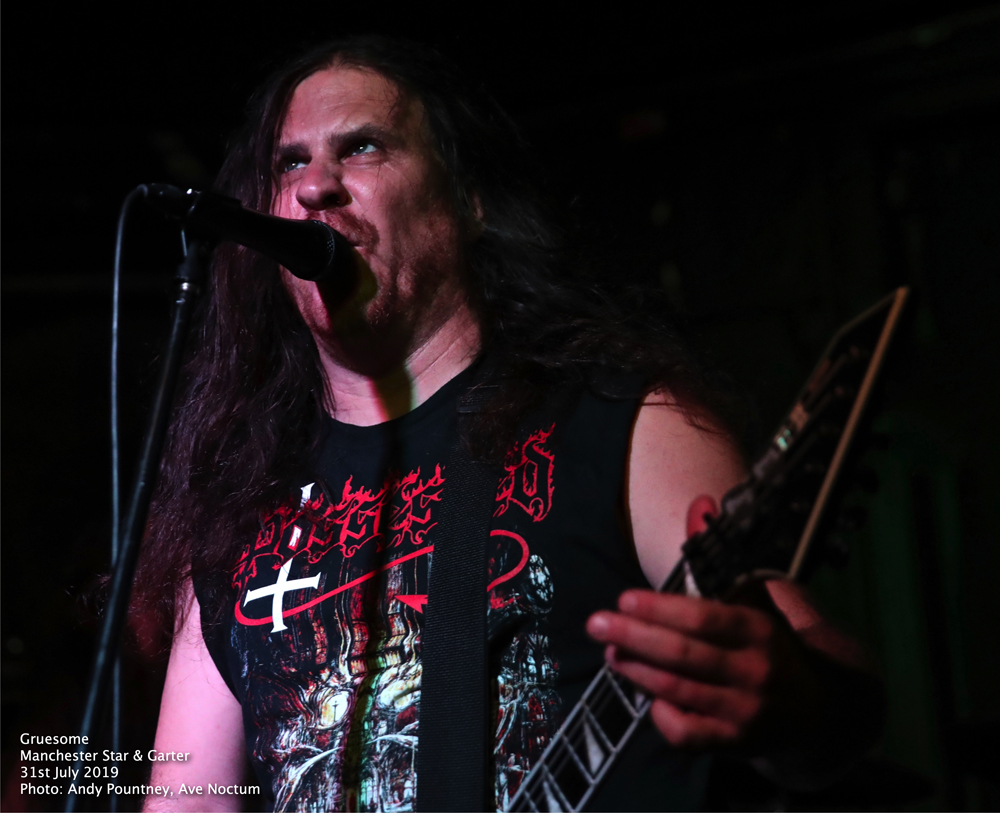 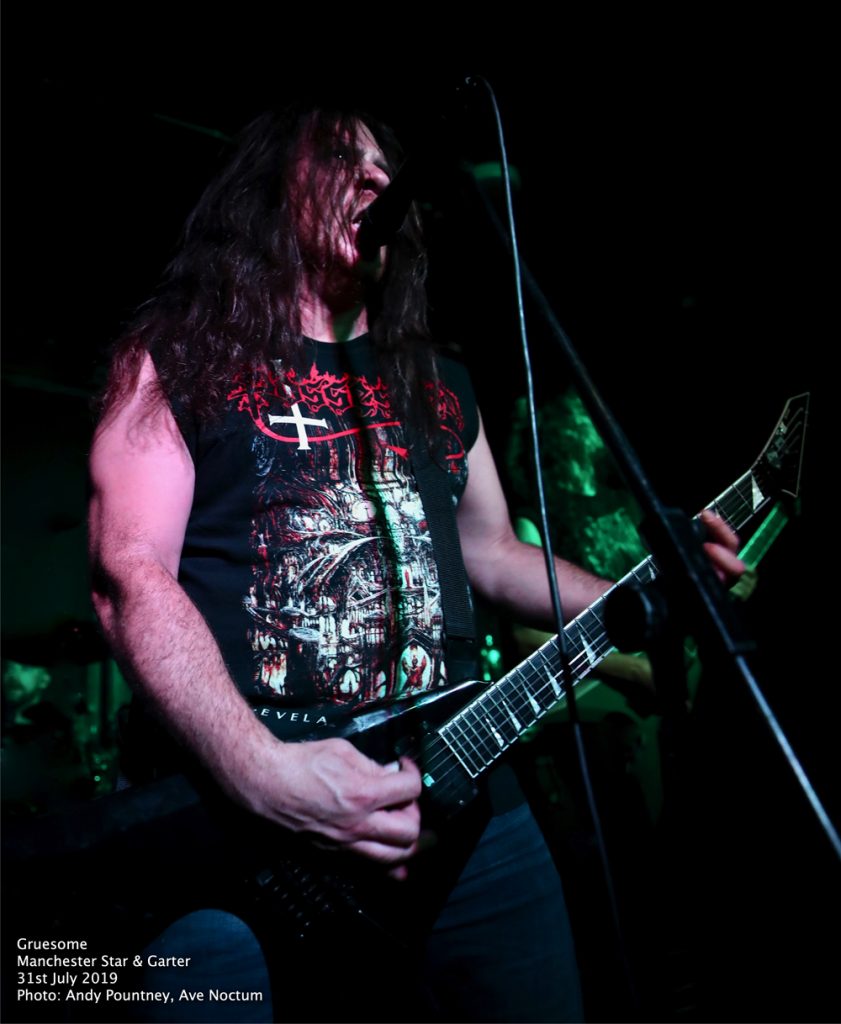 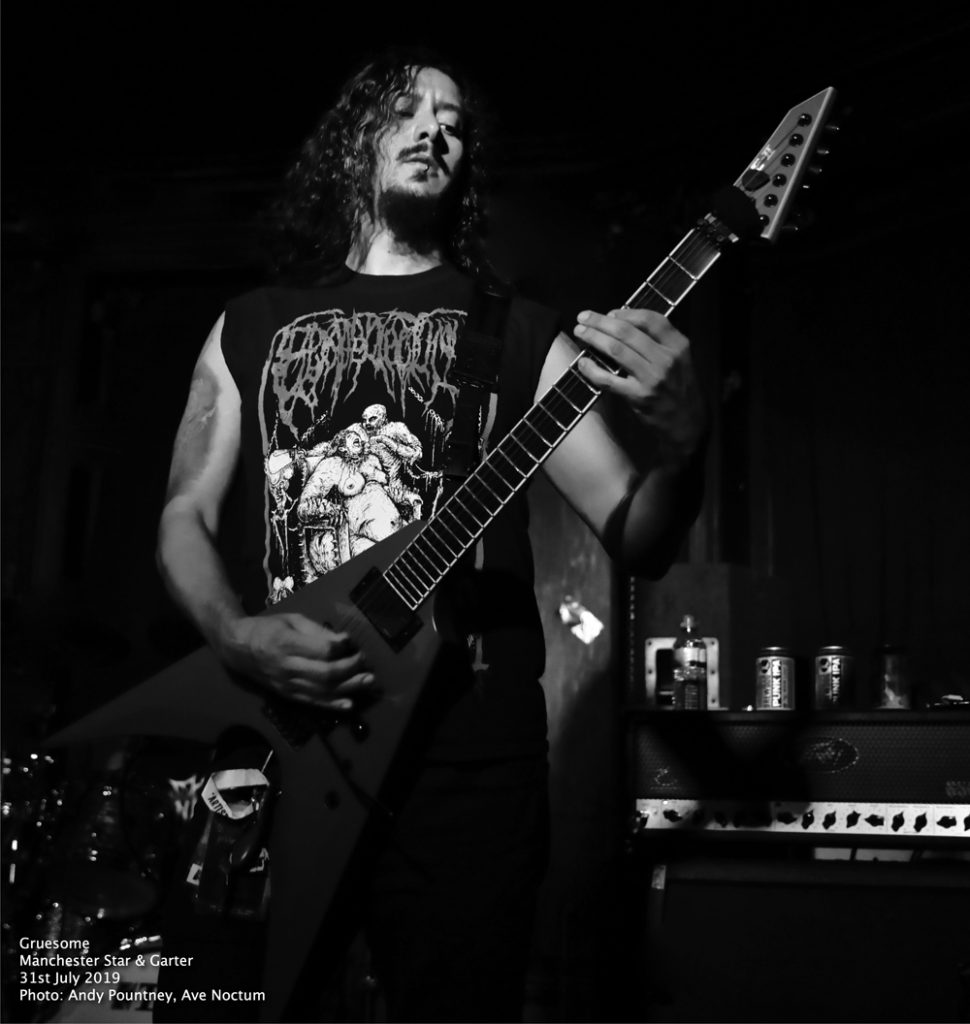 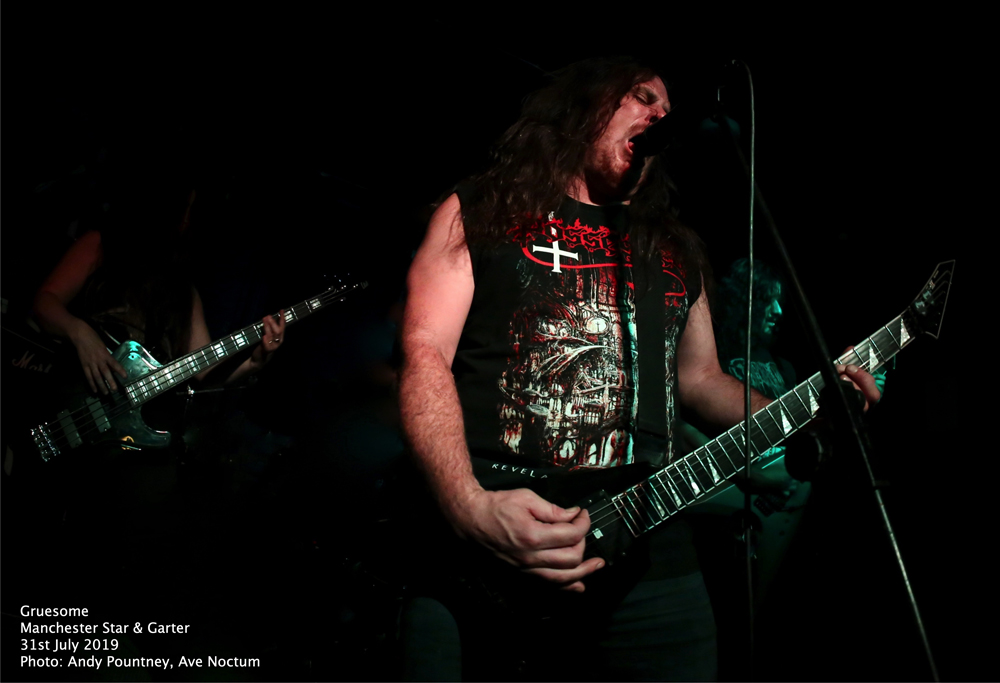 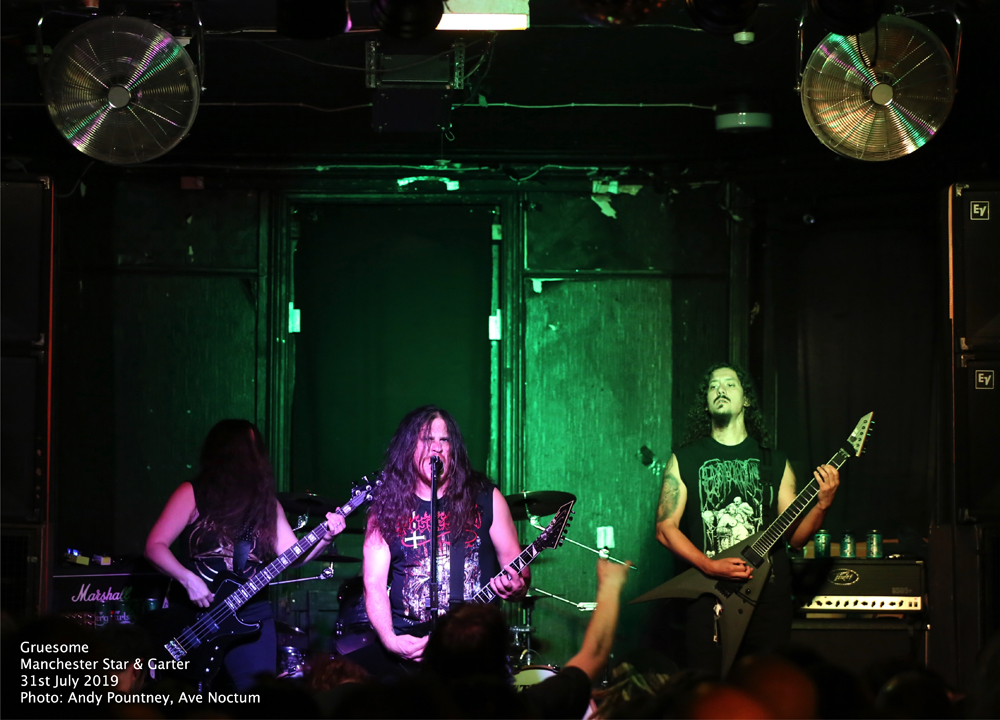 After The Abduction, Beyond Salvation, Existential Dread, Frozen In Shadows, Gruesome, Manchester, Star And Garter