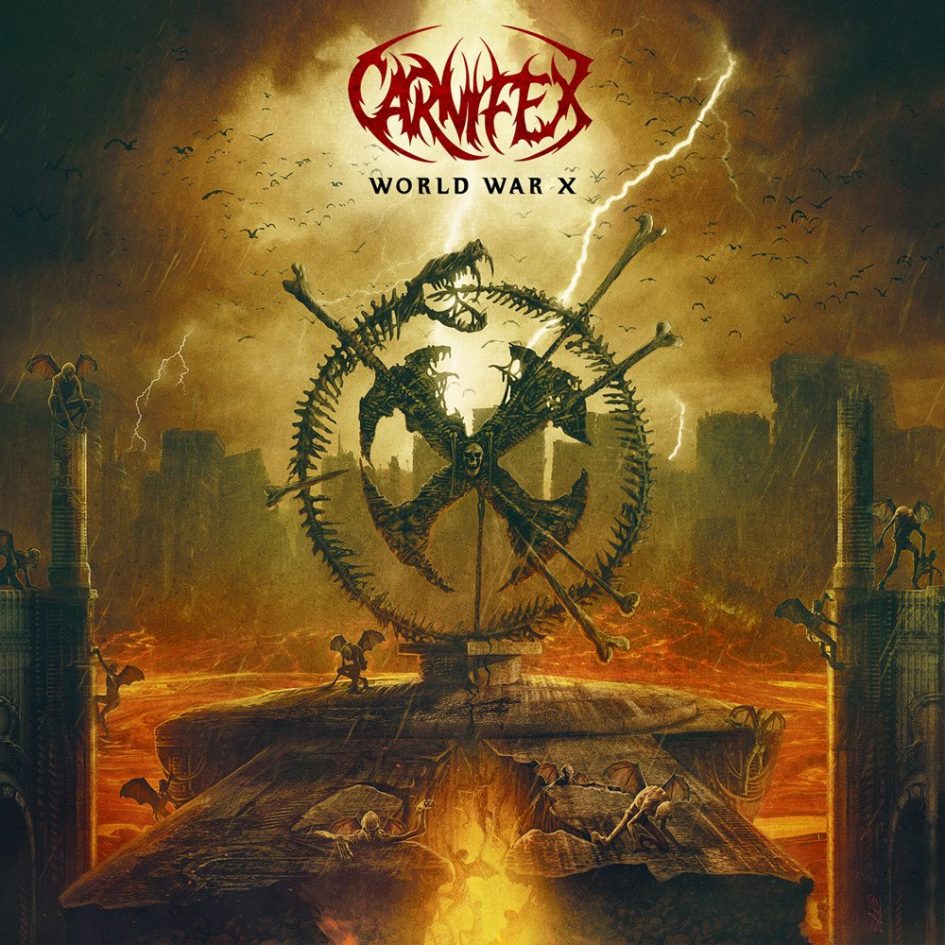 I have a strange relationship with Deathcore, a lot of bands from this genre merely came across to me as cheap Death Metal, and in fact most still do. Nevertheless Whitechapel appeared to me as something else, and for a time The Somatic Defilement or This Is Exile would have easily been among my top albums of all time. Alas I dropped the genre upon my quest for true Metal and let it all wither away around me. As I also did with Brutal Death Metal which was becoming increasingly Deathcore influenced. Then in a moment of clarity I rediscovered Brutal Death Metal and with it bands like Infant Annihilator and Mental Cruelty. I branded these kinds of artists the second wave of Deathcore and set about rediscovering the genres past.

In rediscovering its past I came across a band whom I had previously paid a little homage too, California based US Deathcore legends Carnifex. The bands debut album Dead In My Arms is seated firmly among many an essential Deathcore list. Like many a Deathcore band of the early to mid 00’s the band have had a tumultuous journey of ups and downs. Yet now it is to the bands seventh full length that I draw your attention, World War X. In this second wave of Deathcore many older bands are going back to their roots, which whilst a little trendy is at least good for those who enjoy it. The album is put out through Nuclear Blast and promises a new age of barbarity.

The opening title track is full of power, and likely the best straight up Deathcore track I’ve heard in many years, (even including Whitechapel’s recent The Valley album). Its bombastic orchestrated introduction ushers in crushing riffs, massive breakdowns and traditional Deathcore vocals full of screaming range. The keyboards are also a powerful if not unorthodox addition which add further epic slabs of memorability. Visions Of The End becomes the next catchy banger full to the brim with further Deathcore savagery which is backed by a bolstering of modern Death Metal. Proceeding thereafter This Infernal Darkness brings some striking guitar work that is at times almost Blackened yet not too straying from the Deathcore ethos of this album and band, namely in its meaty breakdown.

Following the slightly flatter bludgeonings of Eyes Of The Executioner we come to No Light Shall Save Us. This was the track I was most sceptical of, being that it features vocals from Alissa White-Gluz of Arch Enemy fame. Whilst I can tolerate later day Arch Enemy the Metalcore leanings of the band worried me. Alas I was proven wrong whilst the track isn’t a stand out for me it is by no means out of place. Speaking of guests there is also the addition of Neoclassical Metal virtuoso Angel Vivaldi on All Roads Lead To Hell. Yet whilst his presence is a welcome addition in the solo he lends little else to the track making for an unnecessary appearance being that Carnifex’s guitarists are already to a very high standard. By the time we get to Brushed By The Wings Of Demons we start to feel a touch underwhelmed, but this track picks up the dead weight and gets the album back on its feet with intriguing riffs and further building bombastic instrumentation. The final two tracks aren’t exactly hard hitters but they still pack a decent punch and round the album off nicely.

All in all I have to admit I expected a little more. Perhaps I was getting my hopes up too much, after all I’m only just now beginning to appreciate this level of Deathcore again, and whilst I can pick holes this is still a very strong release. Yet that said the title track of this album really astounded me and I expected the rest of the album to be of the same calibre, which is very often not the case. If you’re an existing fan of this band I can see you being totally blown away. Equally if you’re more like me and only just getting into (or back into) Deathcore this might not be for you. Personally I did thoroughly enjoy it and I think with age it will only get better, if nothing else it does prove one thing, Deathcore is certainly back, and better than ever