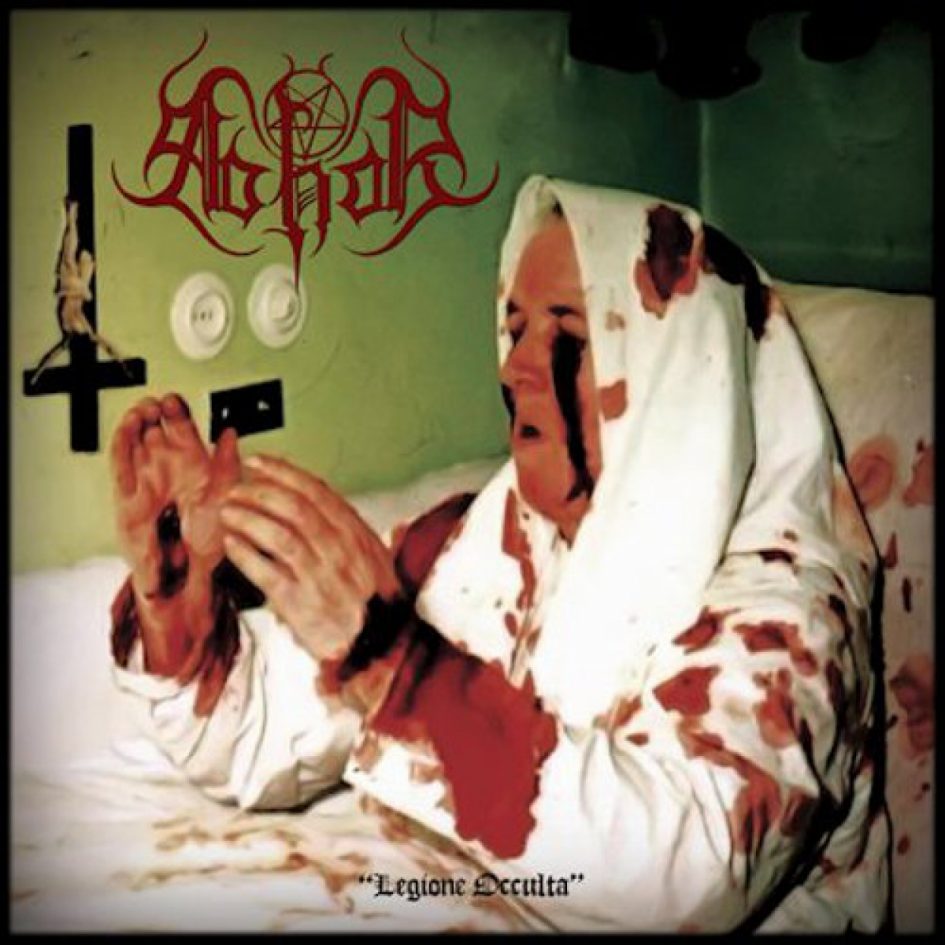 Here we have two aged and highly revered Italian cult acts uniting on 12” vinyl and digitally under Iron Bonehead’s grotty sign of the black mark. Both have been around since the early to mid 90’s and have a slew of releases already under their foul cassocks.

Firstly we have Abhor [8.5] who have 7 full lengths out and although they should need no introduction. They have always just been on the periphery of this writer’s radar so this is regrettably my first real up close and personal listening experience with them. To say that tracks here caught my attention would be an understatement and I can only flagellate and castigate myself for having taken so long to get on-board their vile sermons. The Italians as we know from horror films and all the occult imagery that goes with them deal with themes of terror with panache and here we have a real house of exorcism that spews bile and demonic possession with zeal and irreverence at every twist and turn. Their ‘Legione Occulta’ is a macabre piece of weaving keyboards and croaky fog-bound vocals but what really gives it the mark of the devil is what sounds like a full tied to the bed exorcism in progress. I scratched my head and wondered if it was sampled from a film going through every Exorcist rip off through to the recent Unearthed Guinea Pig Song Of Solomon but to be honest I can’t work this out and it sounds like it could have been recorded by the band to go with the song itself. The screams from the possessed woman are truly horrifying up loud in the production and scary as hell. Along with singer Ulfhedhnir’s foul croaks, gabbling barbed growls and the doomy backbone of the musicianship this is pure horror music incarnate.  They certainly have a ‘Possession Obsession’ as the second track contests. Organs have a creepy gothic flow taking back to the films of Riccardo Freda more than any more contemporary fare and the lumbering tracks rears up and marches cadaverously on, cloaked in fog and eldritch in atmosphere. There’s bursts of speed and things clatter out the traps and tear along in a mad panic, the vocals are pure ghastly and give any gore-grind band out there  a serious run for their money. This is without doubt the most pant-soiling horror music I have heard in a long time. The strange rites of Abysmal Grief [7.5] are much more familiar to me that’s not to say they do anything particularly expected here proffering one long 13 minute scripture to their side of proceedings. After all the bells and flaming candles of Abhor this is quite a reverse as the first half of the number drips ambient smoke over mystic keys and distant female voice. Perhaps we are in the labyrinthine tunnels beneath the nunnery of another favourite sub-division of 70’s Italian exploitation horror. The organ work gradually builds, not throbbing (ooh err) but creeping along and we get what sounds like Latin mass being read in no doubt inverted sense, strings gently weep adding a foreboding sense of what is to come. Finally just when you think the track is not going to manifest anything more the Ministerium Diaboli rumbles into life and slothfully plods still in no hurry but allowing drums and bass tones to bear rancid fruit and lead into ultimate darkness.

There’s great imagination at work here and both bands make a very good match. I’m not sure whether good and evil actually won this battle or what state our possessed victim and we have to call her Lisa was left in at the end of all this. For some reason I can’t get the image of Telly Savalas devilishly licking a lollipop and winking every time I listen to this though.