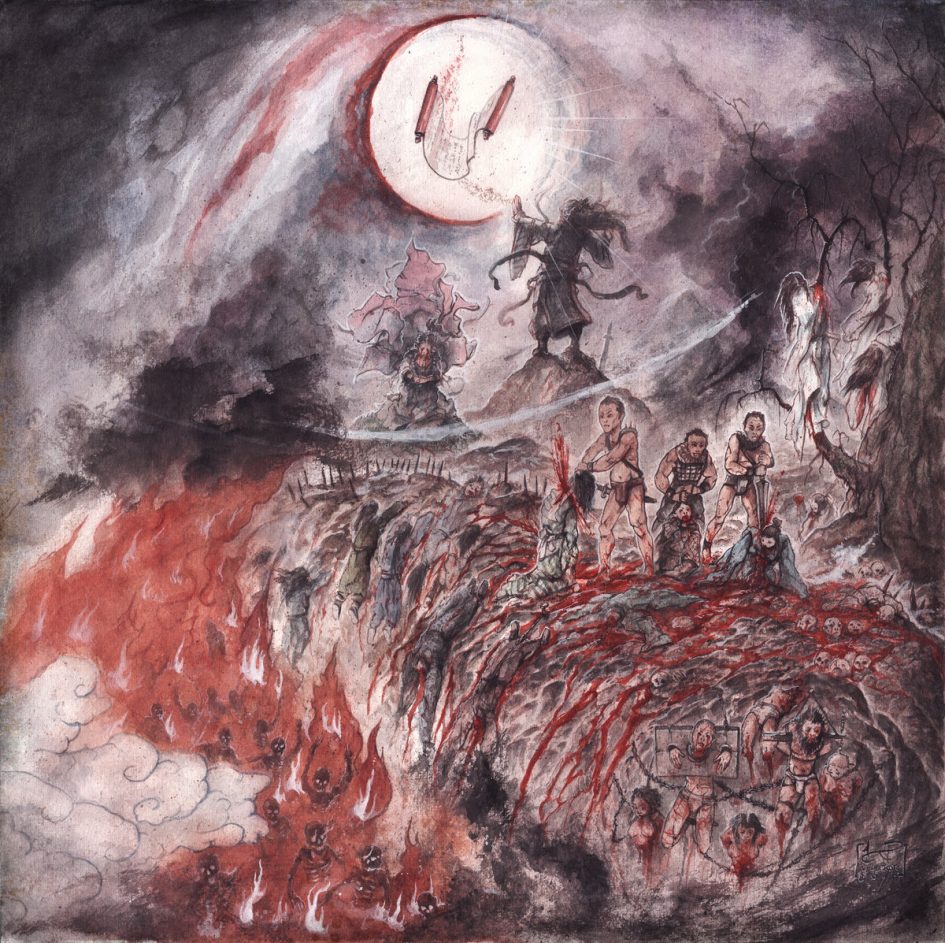 There is a lot to be said about introducing cultural influences as lyrical inspirations and conceptual themes for songs and albums. Sometimes it works rather well, sometimes it backfires and people get up in arms about it and call cultural appropriation. It’s a fine line between respecting something and ripping something off and thankfully, we don’t get much of that in metal, especially the death metal realm! Ripped To Shreds, the death metal project of Andrew Lee returns once again, loaded up with subjects inspired by Chinese history, folklore, mythos, tradition and culture; all of which are delivered to the sweet sounds of HM-2 inspired death metal. If the previous release; “Burial” was anything to go by, then this promises to be just as nasty!

“In Mourning” opens the release up and right off the bat, it’s a fast paced feral beast which is loaded with primal energy and that early 90’s Death Metal edge. Piercing guitars, blistering drums and demonic growled vocals all help create the ferocious edge to the delivery which makes this opening track like a freight train. It’s rather similar to the previous release ‘Burial’ in how it has that early 90’s raw and wild edge to it; when death metal was rough around the edges and would leave you reeling after each listen! “Pseudoelixir” continues this trend, except it ramps the intensity up exponentially, shifting things firmly into the realm of grindcore. Buzzsaw guitars, relentless drums and intensity all around, it’s a great example of how versatile Andrew Lee is as a musician.

The same can be said for the third of the four tracks on this EP; “Nine Familial Exterminations” is another grind-heavy track which is loaded with that ferocious pace and extreme metal intensity. With a longer runtime than its predecessor, this track shows a bit more of what Andrew Lee is capable of coming up with when using grind as a base. The piercing guitars, massive bass and punishing drums provide an ominous atmosphere and at times, the riffs and breakdown sections are absolutely ruthless and evil sounding! It’s a well executed track and I would be happy to hear Ripped To Shreds come up with more like this on subsequent releases.

Closing the release is the rather lengthy “Sun Moon Holy Cult Pt.1”. Weighing in at near 11 minutes in length, it’s certainly not one for those with a limited attention span. It isn’t a track which shifts into the realms of prog either, instead it is more reminiscent of early 90’s black metal influenced material. It’s heavy on the atmospheric build for the first section before the buzzing riffs come in with that Emperor and Mayhem like edge to them. The initial verses have a slow and laboured feel to them, again piling on the atmospheric intimidation factor before it comes alive with plenty of nasty sounds and chaotic feel. Flashes of bestial and primal inspired deliveries shift in and out of the death metal attack before it suddenly throws a curveball, shifting into a traditional 80’s metal melodic sequence to wrap things up before it gets harsh and nasty once again to end things.

In all, this short EP is a great taste of things to come from Ripped To Shreds. The grindcore edge shown in two of the tracks is magnificent and it really compliments the harsh death metal style Ripped To Shreds use as their base for composition and delivery. The blackened elements do help add an extra edge in the atmospheric and ambient regions of the sound, but personally, I would lean more towards the grind elements as something I would like to hear more of in the future, provided that these are the musical directions Andrew plans to take Ripped To Shreds in. Regardless of future direction, Ripped To Shreds certainly continues to impress in the present!