Footprints In The Custard – A New Low (S/R) 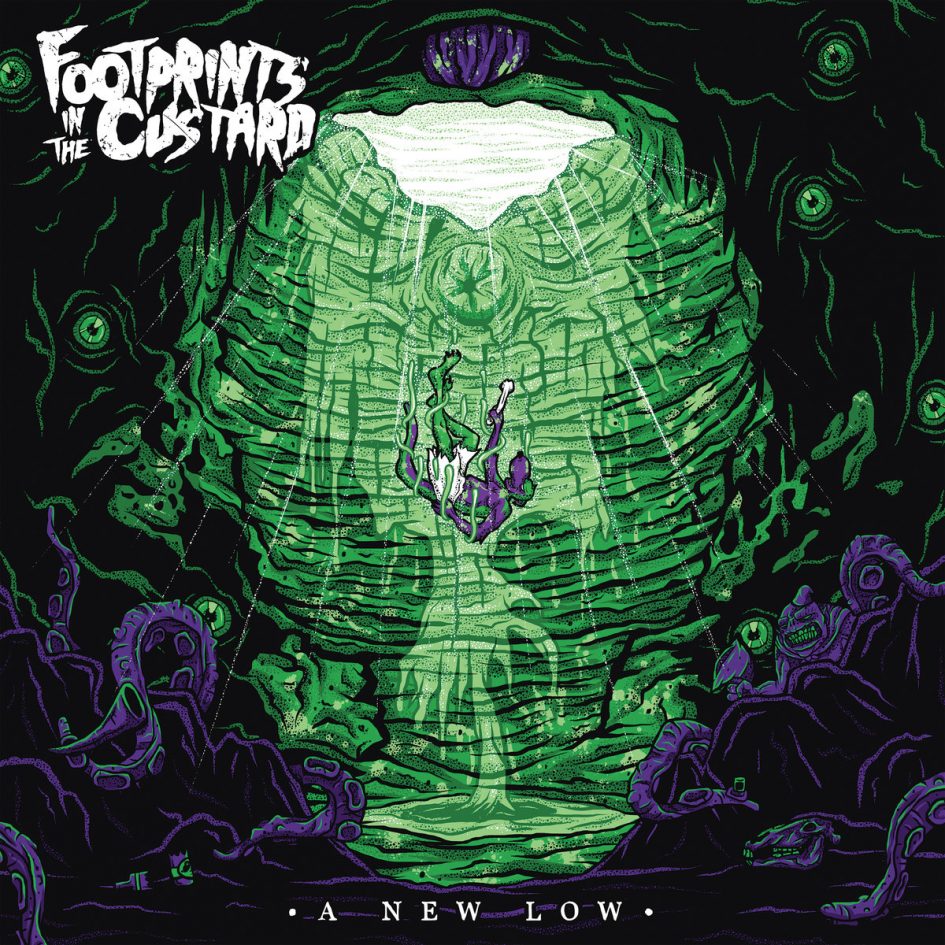 One of the core concepts in Thrash Metal is how fun it is. Sure, you can be all serious like Slayer, Metallica (pre-1991) and Megadave are, but Anthrax were the band who managed to bring the fun with their infectious brand of thrash. Bands like D.R.I and Lawnmower Death helped build on this and once you fast forward to the current era of thrash, bands like Municipal Waste have really defined the serious and energetic fun approach.

Enter Footprints In The Custard… Literally if you must.

The five piece Mancunian party thrash band are a rising force in the UK metal community. Their tongue in cheek and often crass and inappropriate songs are finely tuned Thrash blasts which exist for the purpose of making you laugh, cringe, shake your head or question why humanity has allowed them to exist. With their extensive back catalogue of singles, EP’s and splits, along with their debut “The Descent of Decency”, upcoming album “A New Low” promises to be exactly what it says in the title – a new level of low! Loaded with tracks covering a range of subjects from alcohol to geriatric nymphomania to general life advice, this party thrash attack is ready to assault your ears, your mind and probably your sensitivity!

Obligatory instrumental/sample based opening “A New Low” sets the scene with some stereotypical dramatic flair. There is a high chance that this will be the band’s live walk-out music, but as soon as it comes to a close, “Beer Goggles” comes in like your drunk housemate at 3am. Crashing into everything with no subtlety, the thrash based riffs charge away as the raw vocal growls narrate the story of a typical night out, covering the obligatory bouts of drunken kleptomania, fighting inanimate objects, chasing anything with a pulse when out to get some and of course, the total loss of coordination. Being drunk is fun, and Footprints In The Custard follow on the likes of Tankard by raising their glass with this great opening track!

From here, it’s pretty much party thrash. “Ride, My little Pony, Ride!” is a rather bouncy number, filled with great metal harmony lines, a bright and cheerful progression and of course, plenty of references to going on a wild charge, killing all in your path and having a merry time cantering through guts. “Tequila Nips” is a tribute to the most vile alcoholic beverage on this planet but it has plenty of great chugging thrash riffs and pseudo-folky melody lines which are backed up with some great call and response vocal sections. “Motherfucking Hangover” is as nasty as its namesake; pounding low end, stabbed chords and hard drums assault you as the song details the usual hangover routine of wanting to die and swearing off alcohol. It is something we have all experienced before, and this track accurately conveys this feeling in musical form.

“Don’t Be A Cunt” gets my nod for track of the album. Fast paced riffs and an infectious, adrenaline pumping melodic lead hook pave the way for a valuable life lesson in under 4 minutes. Sing-along chorus moments, gratuitous blasts of double-bass, a comical breakdown section and some of the funniest lyrics I’ve heard in a long time make this a track to watch out for in the live setting. “My Granny’s A Gusher” is another fast thrash based assault which is loaded with plenty of cringe-worthy moments in the lyrics. It will make you laugh and mentally scar you, but thankfully the Donald Trump inspired “Space Force!” will help ease the trauma. A typical hard hitting thrash attack which gets the job done and helps keep the momentum going, right into one of the leading singles from the release “CLIT Commander”, an all round amusing and frantic paced track which has no shortage of sweet thrash riffs and plenty of innuendo and steamy lyrics.

“Bums” borrows a page from the symphonic metal playbook. Combining slower paced sections with flat out riffs and some synth augmentation for added effect, it is an intense track which has some borderline death metal moments; another track which will no doubt be a crowd pleaser in the live domain. “The Horn” has a folk-metal feel to it, much like that of Alestorm. It’s bouncy, almost jig like feel and power metal friendly melodic lines help give it that epic feeling and the pseudo-piratey vocal delivery caps this off nicely. “The Bar At The End Of the World” is a slowed down number compared to the rest of the album, again it has a slightly folky/traditional metal feel to it and it is loaded with that dramatic flair. Sweet guitar solos, exaggerated vocal delivery and that ringing chord effect to make it sound massive, Footprints In the Custard know how to make things sound good. Closing the release is “Love Custard II – The Second Coming” and it is pretty much everything on this release packed into one song. Fast paced, hard hitting riffs, piercing guitar tone, raw vocals and plenty of silly lyrics all crammed together into a party-thrash track of insane proportions. It is a fitting end to a release which is fun from start to finish.

I can’t really say anything else about this album. It’s enjoyable as hell and given the quality of the material on it; get this album, don’t be a cunt!