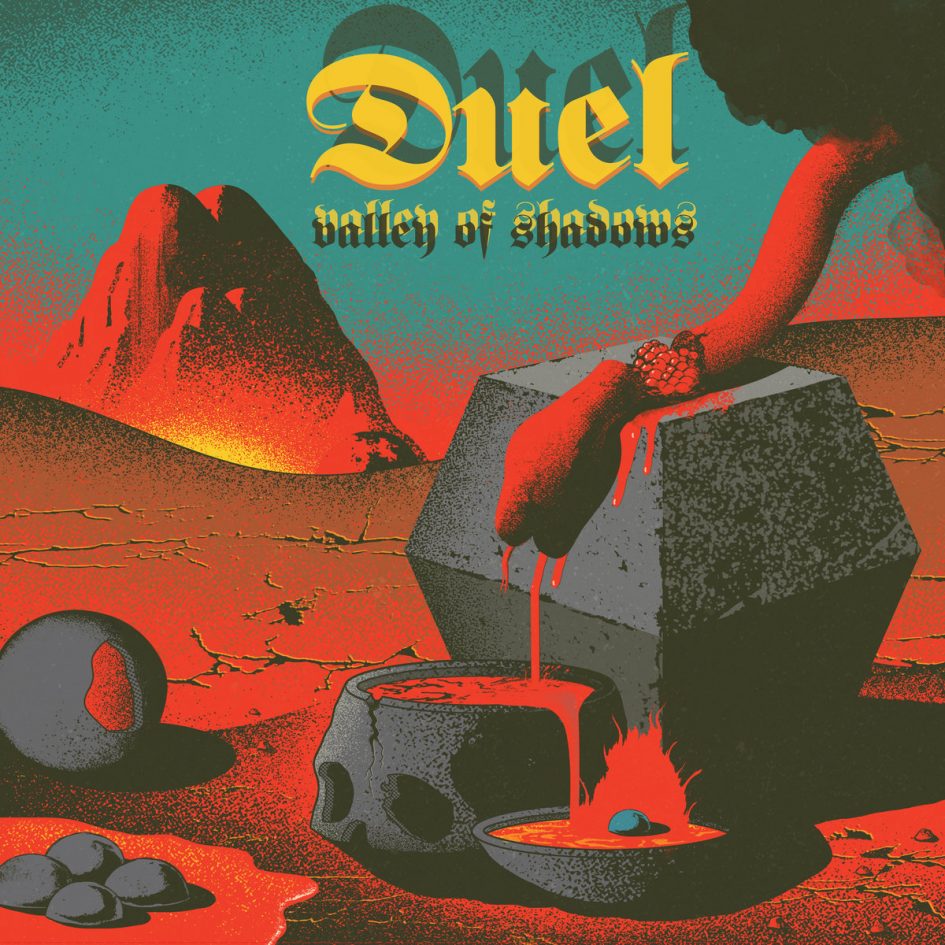 Fucking hell, but time flies. Go back to 2013, and my joint favourite albums of the year were Hell’s ‘Chapter and Curse’ and Scorpion Child’s self titled helping of excellence. Well “what does that have to do with this review and the price of bananas?”, I metaphorically hear you opine? In terms of Hell, nothing, sadly. In terms of the latter band, in 2013 I proudly declared their release the album of the year, and a massive part of that was the presence of young Ron Jeremy lookalike, vocalist and guitarist, Tom Frank (and no, I’ve not looked down there!), and Crazy Legs Crane mimic extraordinaire bassist Shaun Avants. Whilst I’ve not published any reviews of their work since leaving their former band, I have been following their work and been thoroughly bloody impressed. In that time Duel have been prolifically releasing both live and studio albums, and now in 2019 they are introducing the world to their third studio album ‘Valley of Shadows”, and their avowed intent is one to keep on firing out top quality work, a mission that remains unabated.

Album opener ‘Black Magic Summer’ gently opens the proceedings with a combination of a rippling Buddhist bell and a babbling brook before the vocals bludgeon their way to the fore accompanied by a rock solid guitar, bass, and pounding drums, all full of the sensibilities of 1970 hippy love tempered by the steel of a redlining Harley motorbike. Following on hard and heavy is ‘Red Morning Forming’, a near note perfect recreation of early seventies motorcycle rock, every lyric, chords, and vocal sneer dripping to the brim with homage to the hard rock of so many predecessors such as BOC and UFO. This unashamed worship of classic rock continued unabated with ‘Drifting Alone’, and the blues heavy ‘Strike and Disappear’ with its stripped back desert rock sensibilities, the chill being kicked hard to one side by the insistent rock of ‘Broken Mirror’, a number that helps to wrestle their hard rock reputation above so many other bands destined to count their peak as playing at frat houses keg parties, not that their unabated enthusiasm wouldn’t have every party rocking.

By the time the hard rock stop of ‘Tyrant On The Throne’ fires in, there can be little doubt that this is a hard rock act on top of their game, firing out riffs like a Les Paul loaded bazooka, yet they have the restraint to hold back with the almost blues crawl/ballad of ‘I Feel No Pain’. By the time the band closes out the album with the ZZ Top worship blues-boogie of ‘The Bleeding Heart’, nobody can doubt the quality of the band, and their mission to have feet stomping and heads banging.

An all too short UK tour is coming up in 2019, and I can only encourage all who can to get to a live show. The recorded work of ‘Duel’ is fantastic, and all members of the band have a live pedigree that make their work on stage a must. I don’t know if I can get to one of their shows, but if you can in the UK, look out for a grey haired old git in shorts rocking out to their magnificence; that’s probably me!