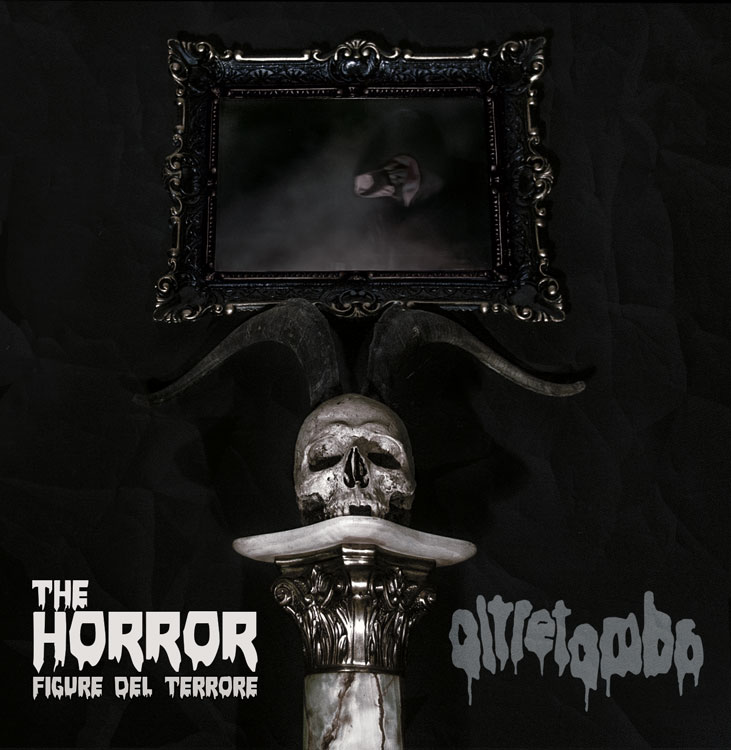 Are the theatrics of Black Metal dead? It’s a question I often ask myself. The early days had the raw untamed grimness of real life horrors, arson, murder and so forth. Then came the more mainstream times with big pompous symphonic arrangements, which whilst not to everyone’s taste did at least bring the drama back to a genre that was starting to stagnate. Equally there is the running shock of DSBM, with its promotions of suicide and self-mutilation. Yet most would argue that none of these traits are an act but rather ways of life. Regardless I feel the danger of Black Metal has somewhat ceased.

Promising to bring a kvlt, grim, raw and old school ideology back to the forefront are Italian shockers Oltretomba. Having formed in 2007 the band have since gone on to record a debut full length entitled The Death-Schieràti Con La Morte in 2014, this album fell under the radar fading away. However not all hope has been lost, the band have now been picked up by Black Metal figureheads Moribund Records and with this power behind them they aim to reignite their flare with their sophomore effort The Horror-Figure Del Terrore. Can this album prove to the world that Oltretomba are capable of living up to their self coined tag of Retrograde Metal?

It is indeed that very tag which intrigues me, a sense of total devotion to the ways of old and equally dilapidation. This presence is truly felt from the bands frostbitten, Punk sound that filters through notions of Death and Black Metal creating an end product that resembles the earliest forms of Black Metal when the genre was yet to be uttered. Her Eyes indulges us in its aggressive nature as a full on assault of the senses, the quality production pops through giving a decadent clarity to the instrumentation whilst also retaining a dusty, tomb-like feel of a most cadaverous chill. We also in this track get our first taste of cowbell a theme that along with the other aforementioned notions is carried perfectly throughout.

The Blade And The Hungry injects more melodious vomit into the mix as does its successor Blue Devil. This level of melody is felt throughout and is a suitable break from the blasting carnage that envelopes it. Truly the mixture of purity and destruction felt within this album is one of the darkest beauty. One could argue that this album lives up to those theatrical elements as previously mentioned by conjuring up such vivid imagery whilst playing with a massive range of influences from Death Metal to Crust, Black Metal to Melodic Death Metal and further beyond that. Nameless Occultist expands upon these themes by even giving us elements of Doom adding more and more to the ever growing genre-defying sound of Oltretomba.

If you like Black Metal and you’re a big fan of cowbell then this album is for you. Imagine Nazareth’s Hair Of The Dog but dipped in cobwebs, putrescence and bile and you’ve got The Horror-Figure Del Terrore. In all seriousness though this is a rollercoaster of trve proportions taking influence from the genre bending beginnings of Extreme Metal, a trend that appears to currently be on the rise and may I add with great success. So if you want to take your Black Metal pre-90s then get involved with Oltretomba and their early scene musings and total Retrograde Metal fury.