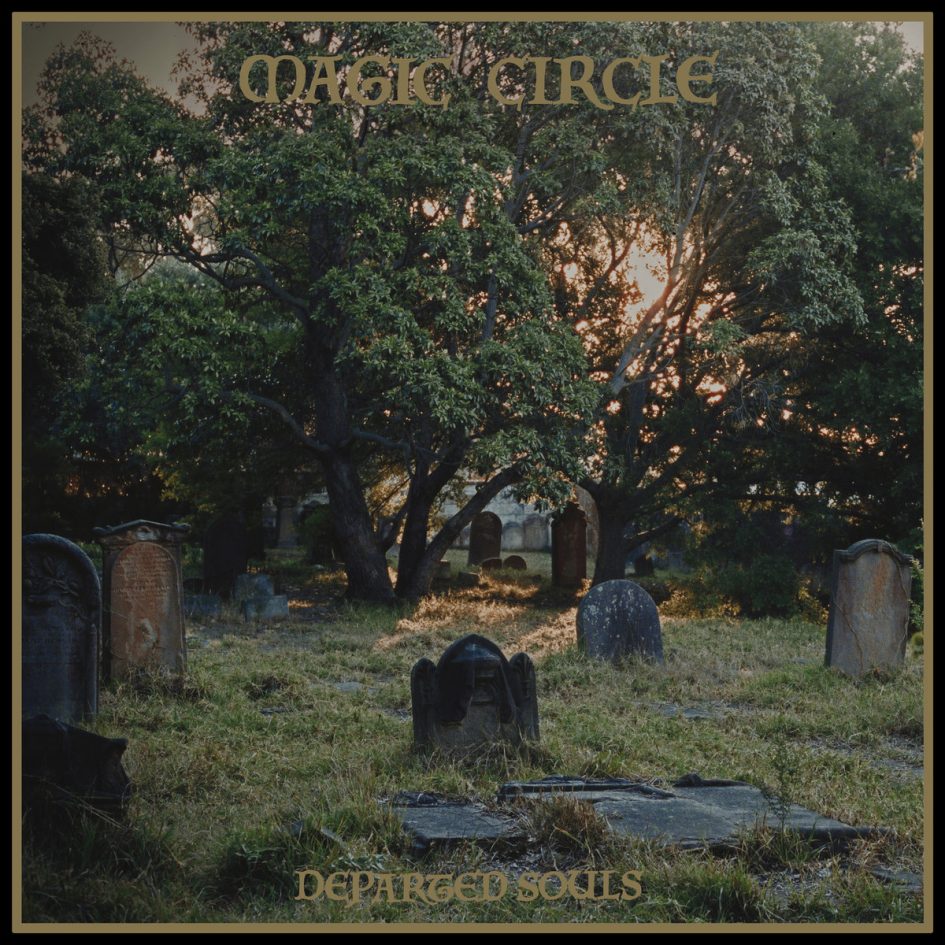 I’ve said it before, and I’ve no doubt that I’ll say it again at some point in the future, but one of the pleasures of this reviewing malarkey is to discover new bands, and for that matter have potential preconceptions about them turned on their head. This was the case from my very first listen to Magic Circle’s new album ‘Departed Souls’. As is normal with any band I’m unfamiliar with, I like to take a few minutes looking them up before starting on the music, and as well as discovering this was their third album, the word “doom”, was what was one that popped up time and again to describe their music. So, expecting nothing but another cookie cutter helping of down-tuned fuzz and Iommi worship when I hit the play button, I was more than pleasantly surprised when the music started.

The title track ‘Departed Souls’ opened proceedings in a suitably slow and heavy fashion, but after the first few chords Magic Circle prove they have a certain something that makes them stand out from the denim wrapped crowd of the Doom scene. Rather than a single paced slog, the band throw in some nice galloping riffs reminiscent of the early sound of NWOBHM (New Wave Of British Heavy Metal for the uninitiated), a sound that is so well delivered with their twin guitar attack. Follow up ‘I’ve Found My Way To Die’ throws I more elements to the mix that you would not expect in a simple pure Doom act, the vocal delivery of Brendan Radigan and the occasional jangle of guitarists Chris Corry and Renato Montenegro adding an almost grunge like feel to the mix; close your eyes, image the band clad in lumberjack shirts and back to front baseball caps and you could almost be listening to a product of 90’s Seattle rather than 2019 Massachusetts. If, however, that concept puts you off, can I suggest you either consider widening your horizons, or holding on for the next number ‘Valley of the Lepers’? A title like that and a seven and a half minute length promises misery aplenty for those who like their music dark, and indeed there is plenty to get your gloom on to, as well as hard rock flourishes in the occasional vocal harmonies and flashes of classic rock guitar pomp. As I said, this is not an album of a single pace or style.

The goodness continues with ‘A Day Will Dawn Without Nightmares’, an opening keyboard swirl followed by cascading acoustic guitars and Eastern percussion giving the track an air of Kashmir, and showing that the band are more than willing to step out of the normal metal comfort zone of over-driven Marshall amps and screaming Les Pauls. If this is not enough to sell you on the idea of buying the album, ‘Gone Again’ opens with an echoing psychedelic electric piano before the other instruments pile in with riffs aplenty, the ethereal notes of the keyboard continuing to wind their way through the track, bringing moments of mellow calmness between the sonic blasts. The album is then brought to a close, after a short acoustic instrument interlude by ‘Hypnotized’, where the sound is simply massive without being overly busy or overly produced, both guitars, the bass, drums and vocals all coming through clearly, each element complimenting the other rather than entering into a competition. Yes, if you’re a guitar fan, you can just revel in the twin guitar interplay and solos; if you’re a rhythm person you can nod along to the almost clinically precise bass and drums; and if it’s vocals that do it for you, well, Mr Radigan has an excellent set of pipes, but the whole is so much more than just the sum of the parts.

Magic Circle is not a band I’ve heard of before, but on the strength of ‘Departed Souls’, it’s definitely one that will have me checking out their back catalogue, as well as keeping an eye out for future releases. Now if only I could stop thinking that the name of their record label 20 Buck Spin sounds like either a very expensive go at a slot machine, or a very specific service offered by a very cheap hooker!