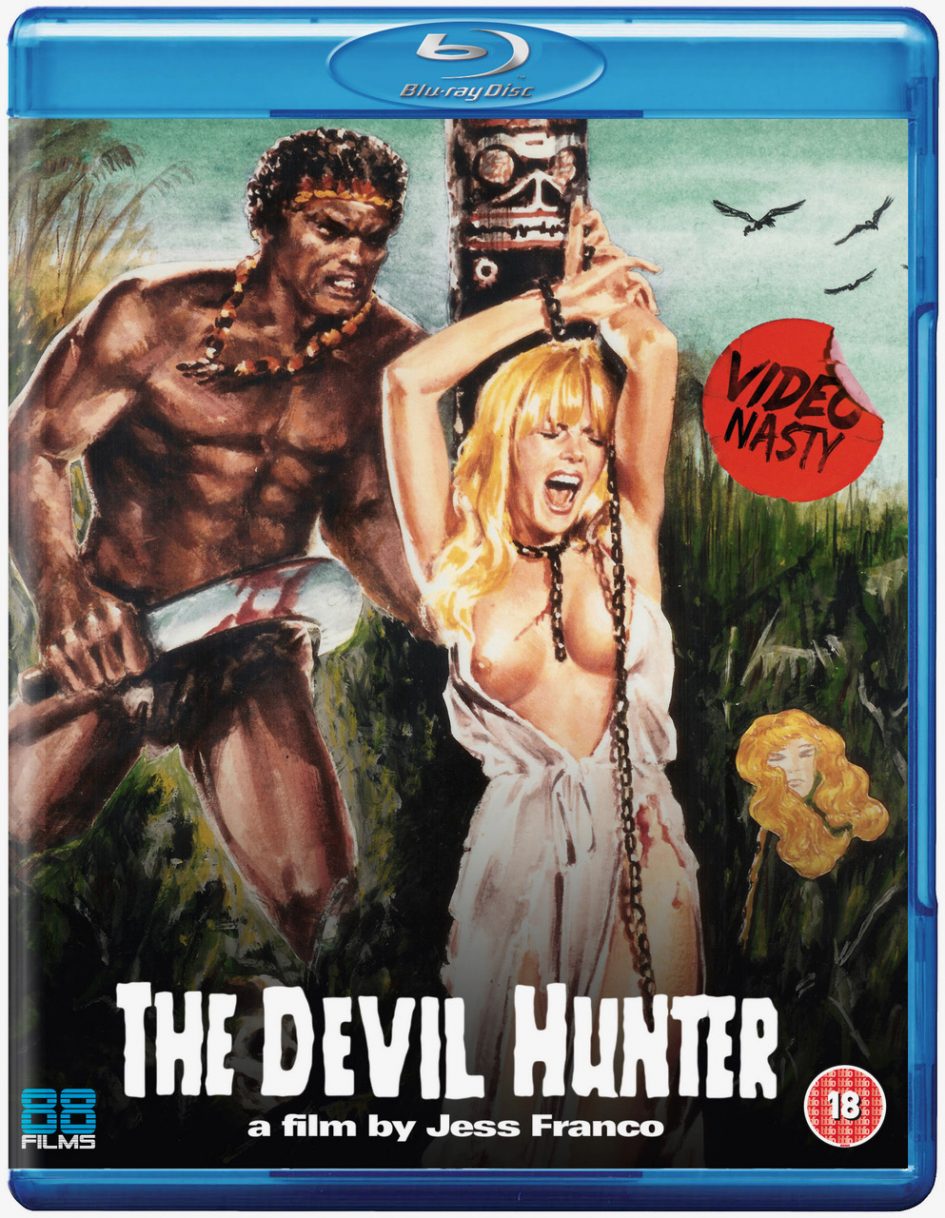 Welcome to the latest instalment of the so bad its good film appreciation society and we have a corker this time round in the form of Jess Franco’s 1980 video nasty Devil Hunter. This is one of the very quick cash in movies borne on the back of the Italian cannibal cycle and followed on from the likes of the infamous Cannibal Holocaust (Ruggero Deodato) released literally 8 months earlier. Devil Hunter has a lot in common with the recently reviewed Cannibal Terror (Allain Durelle 1981) a similar Eurocine production that was often lumped in with it and indeed released back to back as a double bill in the USA on Severin Films. This is one that was definitely attributed to Spanish auteur Jess Franco though and he was not going to duck out of taking the claim for it. Franco generally made two types of movies. Those he had an artistic interest in and were very much part of his personal vision, often starring muses and girlfriends of his such as Soledad Miranda and Lina Romay (who became his lifetime partner) and those he made for a quick buck in order to fund such films. This is definitely one of the latter examples and is pure exploitation cinema at its finest / worst (delete as applicable). Good old Jess was attributed to making over 160 films and was often involved in many other aspects of the process even putting in cameo appearances in many of them. He worked at speed often utilising sets and actors to shoot more than one film back to back, confusing the hell out the cast in the process. Devil Hunter is one such example of this and was made alongside Cannibal aka White Cannibal Queen and is often unsurprisingly confused with it. Some depraved viewers are still no doubt waiting eagerly for the release of the latter on Blu-Ray, perhaps the source material has yet to be dug up to give it the treatment it needs. One thing is for sure though 88 Films release of Devil Hunter looks a million dollars, fresh and vibrant colours and very good sound making it far better all-round than it ever frankly deserved to be. Not only were two films being shot back to back but it appears that Devil Hunter comprises of two separate stories that for the sake of making any sense at all have been flung together at the last second to give us some sense of continuity. On the one hand we have a beauty queen Laura Crawford played by blonde bombshell and playboy playmate Ursula Buchfellner on a tour of somewhere like Cannes who is literally snatched out her bath and kidnapped. The editing makes it look as though just over the road is a jungle full of savages led by priestess Aline Mess. This tribe seem to worship a very strange bug eyed deity who is prone to wonder around with his todger out and demand human sacrifices so he can rip chunks of flesh off them. Naturally Laura ends up here with her odd kidnappers, one seems a sleazy English spiv, there’s another pretty girl and a bandit obviously modelled on Klaus Kinski star of various Franco films but probably not up for the budget of this one and one other who is prone to complain and throw tantrums like a child, a terrible actor to boot. They also have a boat with gorgeous naked accomplice Muriel Montossé on board. Naturally a ransom is made and it’s time for a rescue attempt led by the ever reliable and straight out of the hair salon Al Cliver aka Pierluigi Conti star of everything from Fulci’s Zombie Flesh Eaters (1979) The Beyond (1981) and a host of other Italian classics. It should be noted that his helicopter pilot Antonio Mayans is another terrible actor (in this) who starts having Vietnam flashbacks as soon as he goes in the jungle making everyone watching no doubt hoot with laughter at his predicament. Will Al save the day and the girl or will the rampaging monster played by gymnast Bertrand Altmann with half ping pong balls uncomfortably in his eyes as the make-up prop get his dinner? Well obviously you will have to watch to find that out. Ok here comes the defence and although many will look upon Devil Hunter as terrible, one has to have a fine appreciation of Franco’s large body of work to see it is not actually that bad. There’s no disputing it is a fun film and it has many of his regular trademarks such as dodgy soft focus, exaggerated soundtrack and bad ambient sounds that we have come to love from Franco. It is however pretty damn sleazy and at times downright erotic. The 3 ladies spending much of their time disrobed are all gorgeous, the parallel of Buchfellner and Mess giving this a similar exotic charge to some of Joe D’amato Black Emmanuelle films and the likes of Orgasmo Nero (also 1980). It is a little distasteful at times especially as a tied up Laura is groped by one of her captors but somehow I doubt the actress seriously minded as she found herself in such positions all over again in Franco’s Sadomania a year later. There is no reason this should have ended up on the video nasty list it was just caught up in the whole brouhaha and lumped in with the more ultraviolent Italian cannibal movies. Devil Hunter is not even that gory. It is also worth noting if you are looking for the film that Al Cliver has his arm chopped off and spends much of the time running round with it tied behind his back it is not this one but White Cannibal Queen so you will have to find the DVD of that to make a fully good double bill night of it. Alcohol will help you get through it too! At 102 minutes the pacing could definitely be improved upon and it is one of the reasons I kind of think there could have been two films on the boil here which were flung together as they would have been too short in their own right. This could certainly have been improved by quarter of an hour trimmed off it but who are we really to moan getting Devil Hunter uncut and looking like the very pride of the jungle? Of course Franco left us in 2013 at the age of 82 living a very full and interesting life. Fans will have definitely seen the chain-smoking director in his latter years talking about his various films in interviews, a couple of which can for example be found on the Severin release of this. 88 Films whose extra output has been really getting very good of late take us down a different route with a 48 minute featurette ‘Franco-Philes: Musings on Madrid’s B-Movie Maverick.’ This includes output from genre enthusiasts such as Julian Petley, John Martin, Rachel Nisbit and Tony Tempone as well as actors such as Ilsa / Greta’s Dyanne Thorne, Howard Maurer and Antonio Mayans (who was actually a much better actor when not having Vietnam flashbacks). This is a very interesting piece for both those who are wondering just where to start with Franco’s sprawling cross-genre oeuvre as well as for those of a more seasoned nature.