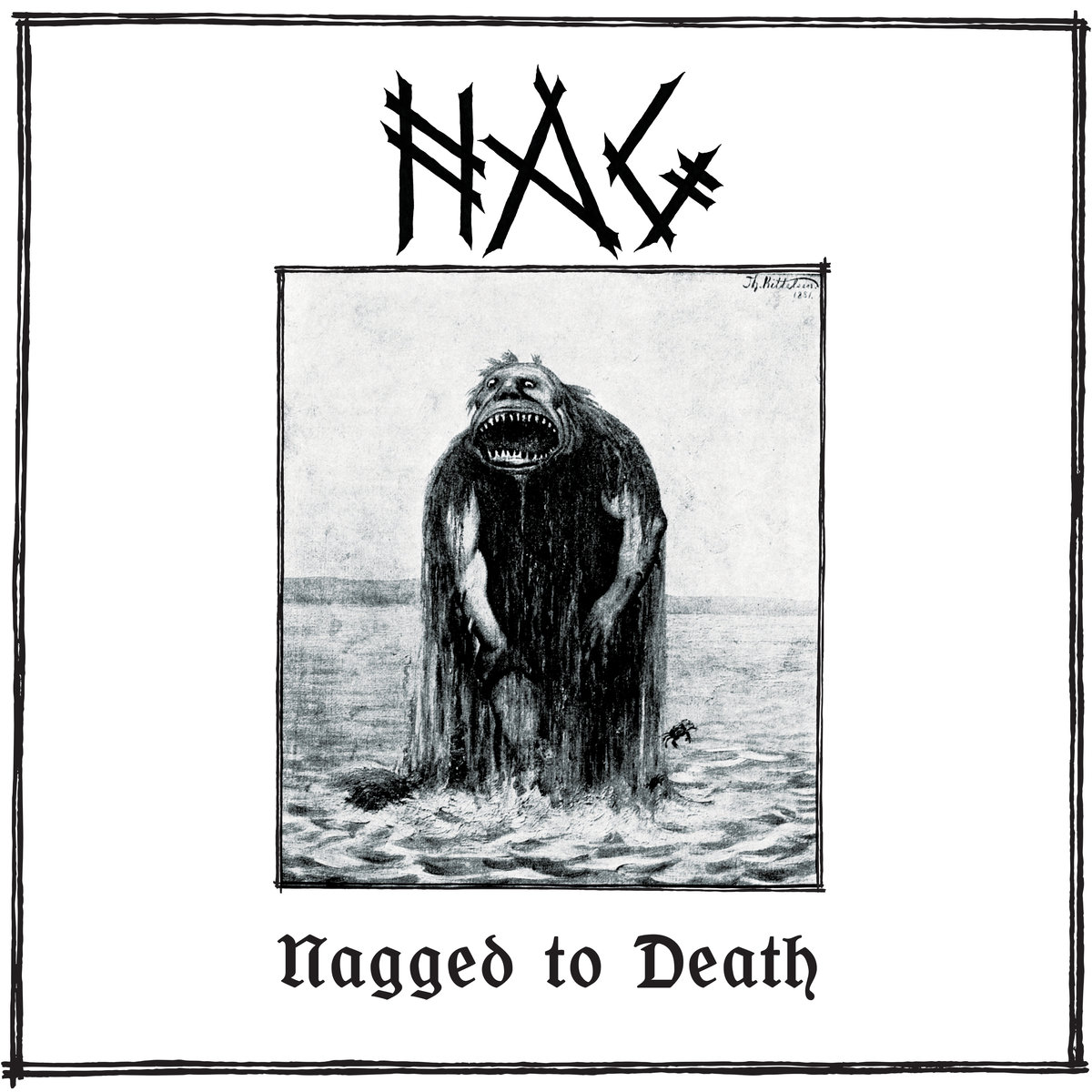 Can’t complain, this is the right way to get ‘nagged to death’ especially when the means of doing so is by delivering us a nice slab of vinyl. It was a timely arrival too as I have been reading A Peaceville Life by Hammy recently and playing a lot of the older early artists of the label to go with it. Quite honestly after one listen to this it was easy to draw parallels with the likes of everything from Doom, to Discharge, via a big dose of crusty stench and generous helping of Norwegian hardcore to boot. Obviously the production here is a damn sight better than those early days of that label and their origins with cassette releases and boy does this one pack a real good punch. The three naggers behind it hail from Stavanger and if they ain’t been approved by old Fenriz I will be really surprised.

For those not quite so old and with stenchy garb not quite yet held together with grime and body effluence the details accompanying this mention the newer breed of bands such as Nails, Trap Them and Converge and I can see that to a certain extent. One thing’s for sure there is absolutely no screwing about as the trio behind this shred in and blast away and keep up the volatility throughout the 13 tracks here, causing maximum devastation in around 35 brutal minutes. The drumming pounds in and guitars grind as ‘Sigh’ screams at odds with its title. Bouncing away it has a nice mean tone to it with lots of grit and gristle. The vocals are perfect and the cleanest thing about it hollering and yelling away with a faint bit of echo behind them. In a word “oof”! This has already knocked me flat and the 2-3 minute tracks keep on doing so. Massive charges of pulverising, meaty guitar wreck my head, the punkish vibe more prolific than what I would term hardcore and the roots tread right back to the 80’s in my mind but with a vicious modern edge about it. The title track slows things down a little and allows the listener to wallow in the bands filthy apocalyptic doom. ‘No Rest For The Blessed’ is tremendous with a plaintive and morose chorus part dragging back to times of cold war misery and deprivation. It’s particularly haunting and effective and from the intro guitars proffering early Killing Joke through to the Amebix like chant this is a track I simply cannot stop coming back to and is a modern day classic up there with old treasured numbers by the likes of Flux Of Pink Indians and Icons Of Filth, the vinyl will find a good home nestled in with the likes of their stuff.

Despite plenty of chaos which really rears its ugly head on the halter-neck speed of songs like ‘Sorry’ there’s also plenty of control and melody. The band apparently won a Norwegian Grammy for their self-titled 2016 debut and they seem hungry to pick up some more awards with this absolute beast. ‘The Story Of My People’ seems like a fusion of Chaos UK and Entombed and it’s a true marriage made in hell giving this a crossover appeal that should have everyone liking extreme music bouncing away and grinning like loons when they deliver it live. The band have just shot straight up my must see list so hopefully someone will drag them kicking and screaming over here at some point, one can but hope. Despite the diverse mix of bands it’s easy to mention while listening to this, it’s not too over-complicated as songs such as ‘Who Will Save Us From Rock’n’Roll’ attest, basically rock n’ roll is what it all comes down to and hopefully nobody is gonna try and save us from it; it’s too damn late by now anyway.

Blending extremity, dirt and atmospheric emotions not so much repressed but completely in your face, there ain’t an ounce of lean on this and it simply rages away with every track a complete and utter cluster bomb of fuck you attitude. This has been getting a couple of spins a day since it arrived and if I hadn’t already finalised my albums of the year would have definitely been included. The line has to be drawn somewhere though but for the moment I’m just gonna keep on spinning this well into 2019 back to back with some classics from almost 4 decades ago.