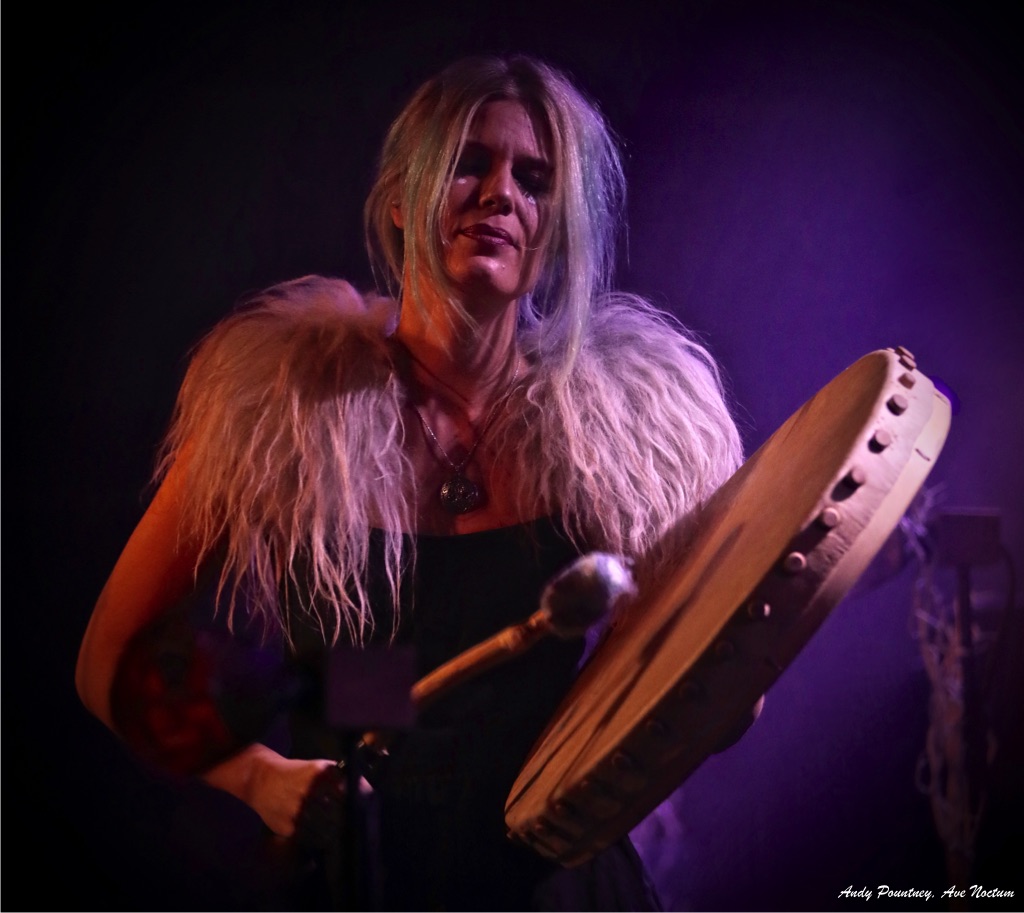 My final gig of the year couldn’t have been better, an intimate night of sumptuous musicality in the company of two of the finest proponents of soulful, ambient and passionately intense performances even though headliner Myrkur did a black metal set as well as her folk set. However before that we had the enigmatic Jo Quail who had just started her set as I walked into the packed venue which I had been to previously in 2017 to see Kiefer Sutherland (yes you read that correctly) doing a country rock set with my sister. Critically it’s not an ideal venue when it’s packed especially if you’re vertically challenged as the stage is not that high and the performers are not that tall themselves so finding a vantage point was not easy. Standing at the back near the bar, strategic move on my part I may add, I grabbed a beer and parked myself near the sound desk as Jo was developing a percussive backdrop on her electric cello, the mellowing beat was transfixing on this opening tune, titled “White Salt Stag” as the ambient tranquillity was honoured brilliantly by the crowd even by most people ordering drinks at the bar. Each tune Jo played had an intensifying structure, building up from skeletal framework as “Gold” followed after a brief chat. Those beats were tapped out again, this time on the neck of the cello, as she recorded the beat and let it repeat, very similar to how Anathema perform their acoustic shows when Danny Cavanagh taps out beats. The mournful melody that followed was desolate, tinged with desolation as Jo increased the tension like I have mentioned, with each passing moment as a shift in pitch was heard adding layer upon layer before a beautiful glide into a more dense approach. The audience loved her music and after every song she was cheered like a headliner and she was visibly moved by the adoration and thanked the crowd for making her feel so welcome as she announced that the next song was a new piece and that each time it is played it changes and after it was played I understand why. Titled “Mandrel Cantus” the song was a kaleidoscopic amalgam of chaotic ambience, with an industrial like beat courtesy of the pulsing beats that had a slight delay I thought making the song incredibly foreboding. Her cello playing was equally sinister, with a density and ominousness that layered into the crowd as her set ended with “Adder Stone” after the rapturous applause. She explained that this song was over four stages which I felt you could decipher throughout the song as it began mournfully and eerily gradually escalating until a surge in power which worked superbly. That power transferred into the audience as her playing became manic, as Jo engrossed herself into her performance and in some respects this track was the most menacing and dramatic track of her show. Distinctly menacing she dramatized each movement with gesticulating actions as each fluidised change was potently executed and left the audience enraptured by her performance. If you have ever seen any of Myrkur’s live shows you know she is one of the most gifted musicians and performers in extreme metal and tonight we were treated to two sets, a traditional folk set and for want of a better phrase a second metal set. Firstly we had the folk set which had a mixture of traditional folk songs spread across various countries sang in different languages as a wealth of musicians floated on to the stage amid subdued lighting courtesy of a series of forward facing large filament like bulbs that varied in luminosity throughout in evening and had varying backing colours. Added to that was the osseous like trees scattered around the stage creating that mystical aura as Myrkur, real name Amalie Bruun, appeared to a tumultuous cheer. Accompanying her was a drummer, acoustic guitarist, bass player and cellist which I believe was Jo Quail, though it was difficult to see from my vantage point. Myrkur played various instruments throughout the evening but for the initial songs she had a percussion instrument as the set opened with “Bonden Og Kragen”. The audience deathly quiet as she beautifully sang the song that led into “Jenta Ho Gjekk Seg Uppå Ei Hø” prior to which she explained that she will be playing some Nordic folk songs and that the instruments may need tuning because they do what the hell they want which was greeted with a ripple of laughter. As the song started it was very clear that her confidence as a performer has increased hugely, standing at the front she commanded attention as the song could easily have been lifted from any one of the TV show sagas that have aired recently like Vikings, The Last Kingdom etc, her voice was magnificent, forceful and possessing the utmost clarity as a Danish song “Ramund” was played that was very percussive based. A much more mournful track she demonstrated a broader range of vocals accompanied by the excellent musicianship as it was followed by a Scottish track, which was greeted with a cheer from a few in the crowd, called “The House Carpenter (The Daemon Lover)”. This was a highlight in the set, with an excellent beat as the mood was sent skywards as she took a big swig of beer at the end of the track. She played one of her own compositions “Himlen Blev Sort” that had a sombre atmosphere before speaking briefly about a computer game and the inclusion of a song from it in the set as we got to hear “Lullaby Of Woe”, a gorgeous piece of music with lone vocals and cello that had a dark atmosphere that lead into her donning the nyckelharpa as she made a comment about the instrument not being agreeable for an electric concert. She did a solo piece here as her confidence was astounding, the emotive delivery was palpable and the audience was perfect throughout as she left the stage to a massive cheer to ready herself and the band for the second set and I already thought I had had my money’s worth. With a beer break done the stage was left in darkness except for those filament lamps flashing various colours as the backing music had a dark synthwave touch to it, a buzz of excitement could be felt in the audience. Myrkur returned to the stage along with her three hooded demons on guitar, bass and drums. She had changed costumes and blackened her eyes as the audience greeted her arrival with a massive roar of approval and the second set initiated with “The Serpent”. The contrast between with the folk set and this was colossal as the rancour of the black metal oozed from the musicians yet filtering through that barbarity was Myrkur’s vocals like an echo on the wind, easily decipherable in the mix, so thanks to the sound engineer as he or she did a fantastic job. The sinister slant created a maelstrom of buoyant fury as the set effortlessly flowed into “Ulvinde” amidst constant flashing light. The plunge into ever increasing ferocity was brilliant as the majestic scorn poured into the crowd was tempered by Myrkur’s cleansed vocal sheen. I expected a big cheer for “Onde Børn” but instead I got a massive one, the song is fantastic and a favourite of mine and obviously was everybody else’s as the tunes deft melody blanketed the crowd supremely. With a lone vocal intro phase “Jeg Er Guden, I Er Tjenerne” the crowd was not quite as respectful here as I suspect they were expecting more metallic material but Myrkur carried on regardless, her dulcet tones enveloped the audience before the song switched into black metal and she followed with a glass shattering scream, which the audience cheered to. The song was fantastic, its gradual and sequential build up was perfect as the finale was topped off by a ghostly vocal delivery; just brilliant. She announced that the next song was from the first album and proceeded into “Skøgen Skulle Dø” which also began with a lone vocal intro but this time the audience learned to be quiet as the songs constant fluxing moods were superb. Even though Myrkur takes the focus it cannot be understated how integral the backing musicians were, they’re shadowy existence at the back in black hoodies made them appear as ghouls, you could not see their faces, and their playing dexterity was incalculable to the passion of the show. “Måneblôt” was black metal personified, a holocaustic onslaught that blasted but was tempered by atmospheric bliss which left only “Juniper” as she said this gig was the last of the tour. The song was huge, a dramatic, slow and remorseful tune that climaxed a stupendous evening of music from burgeoning two artists who I am sure will move onto big and better things. 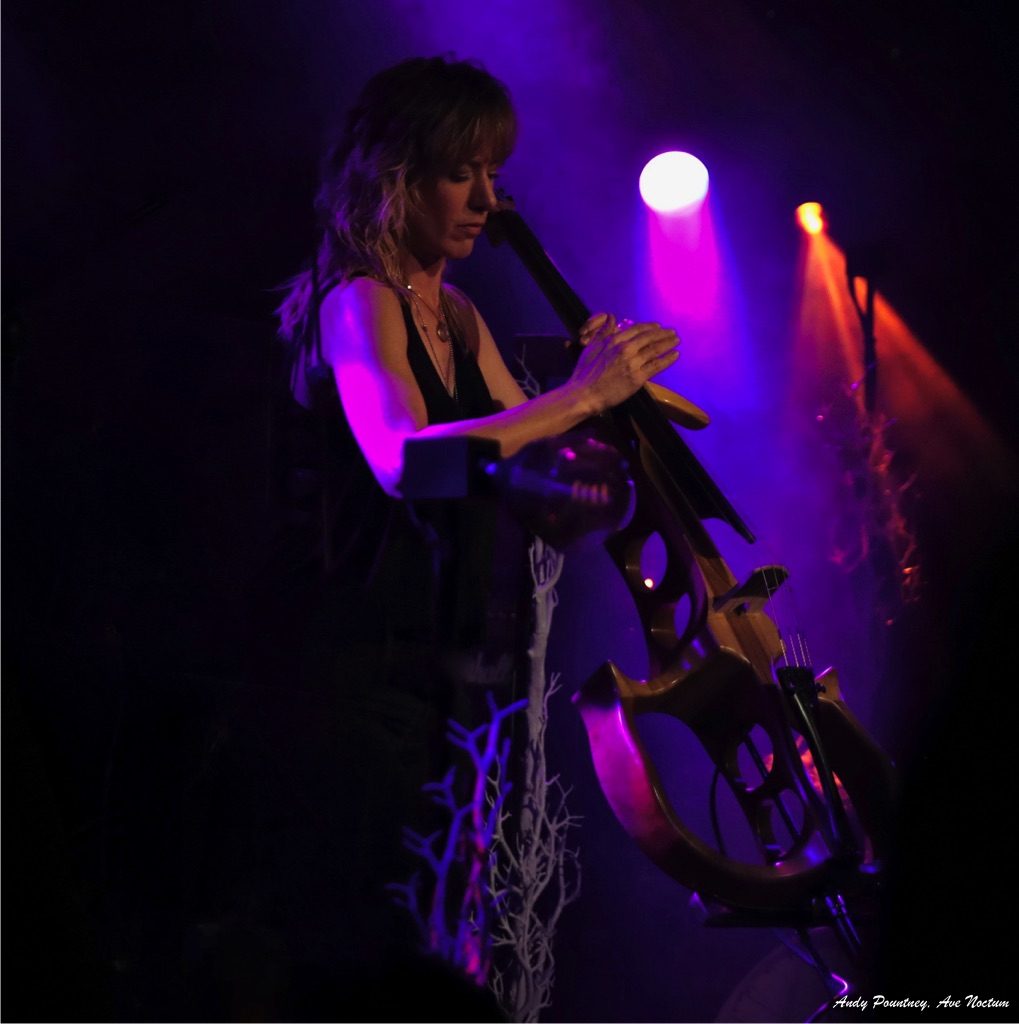 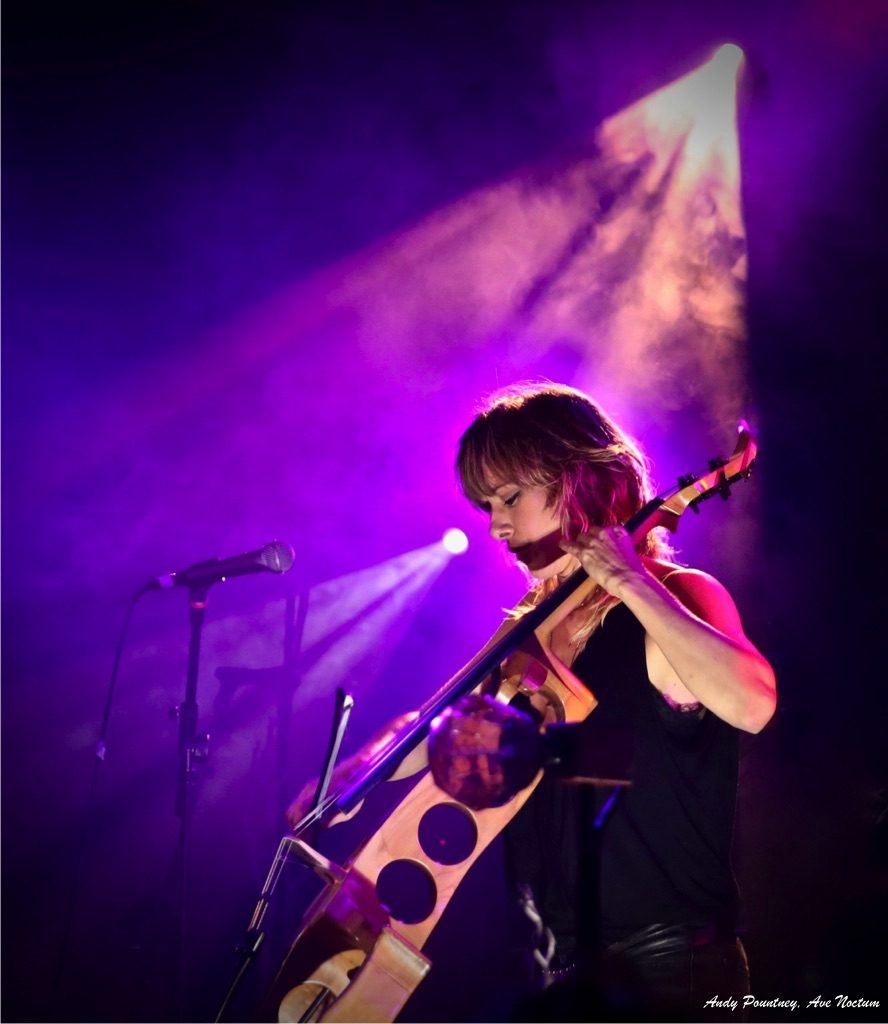 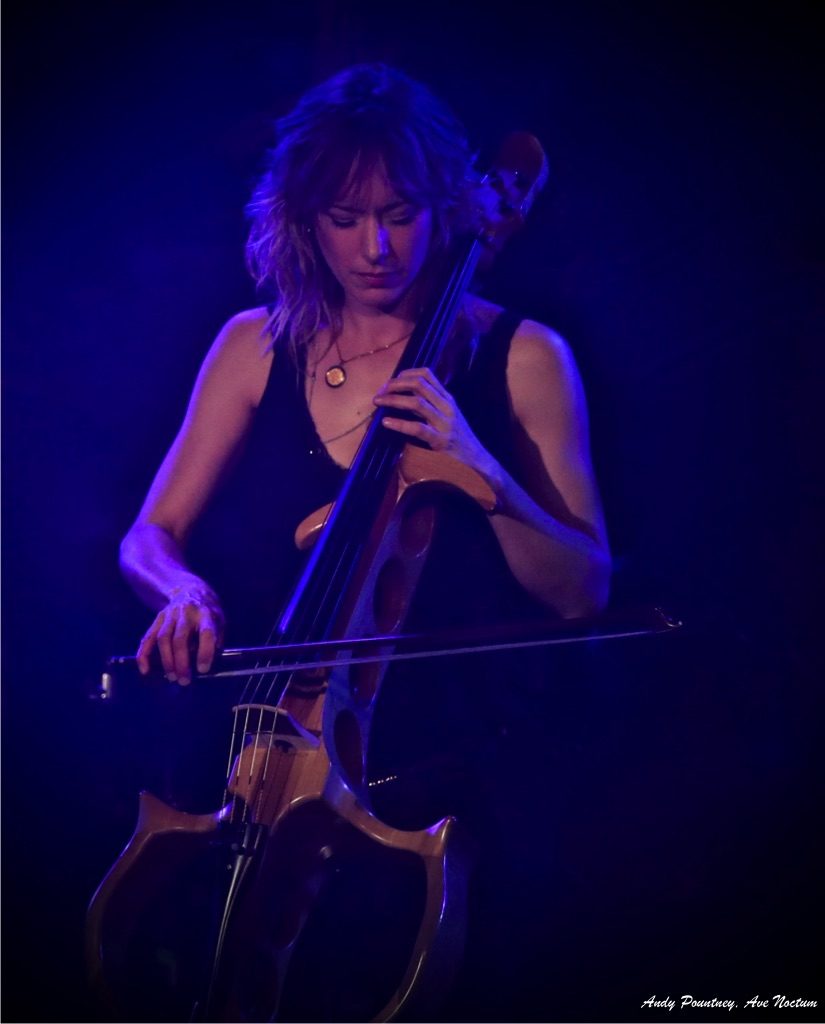 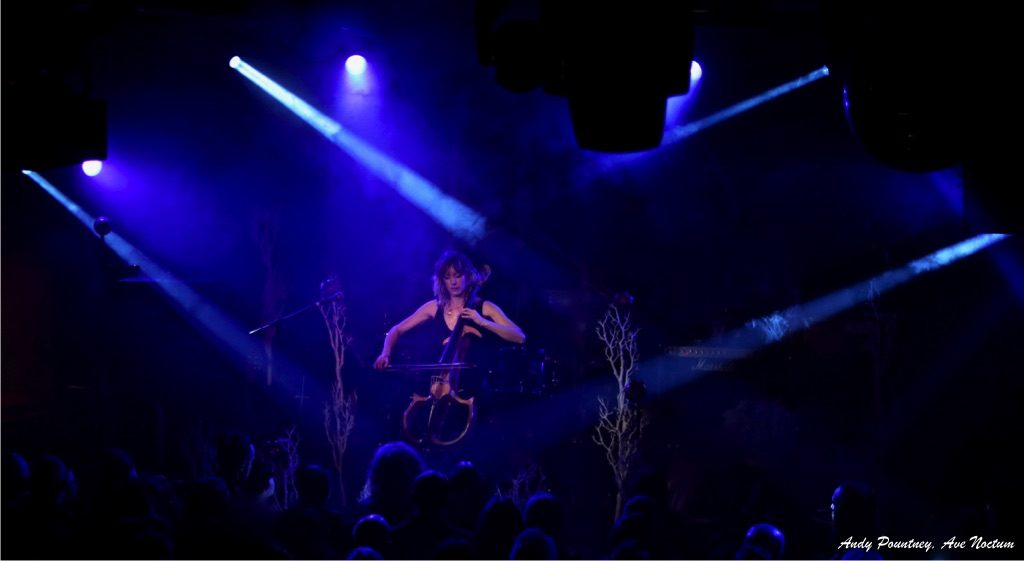 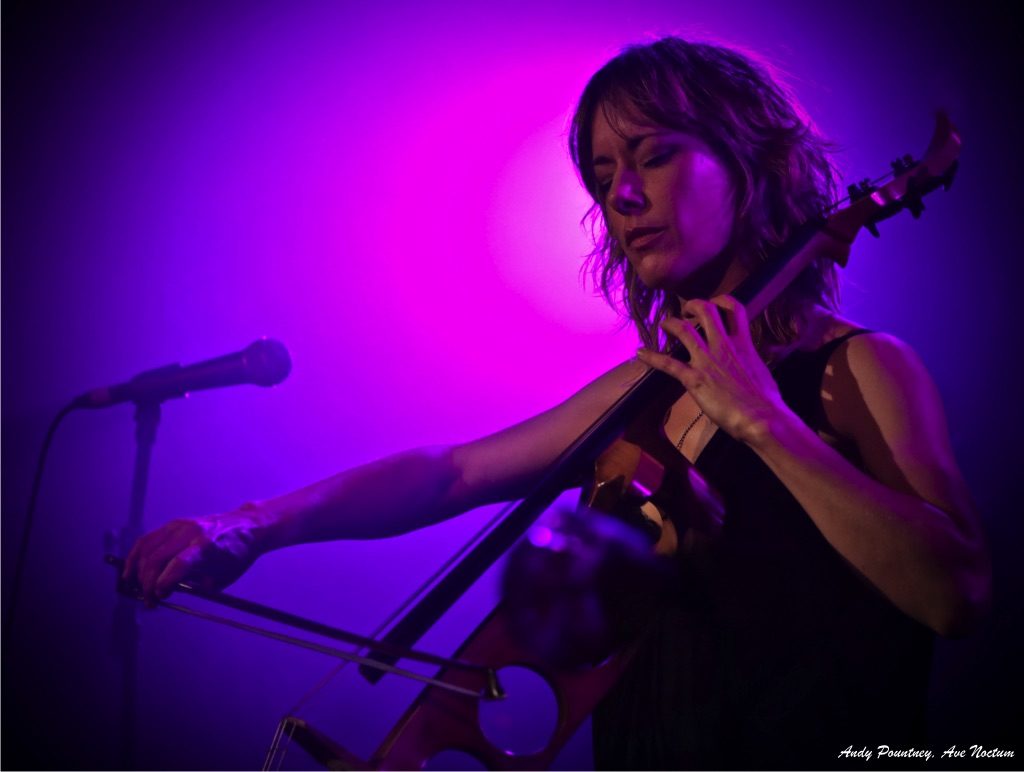 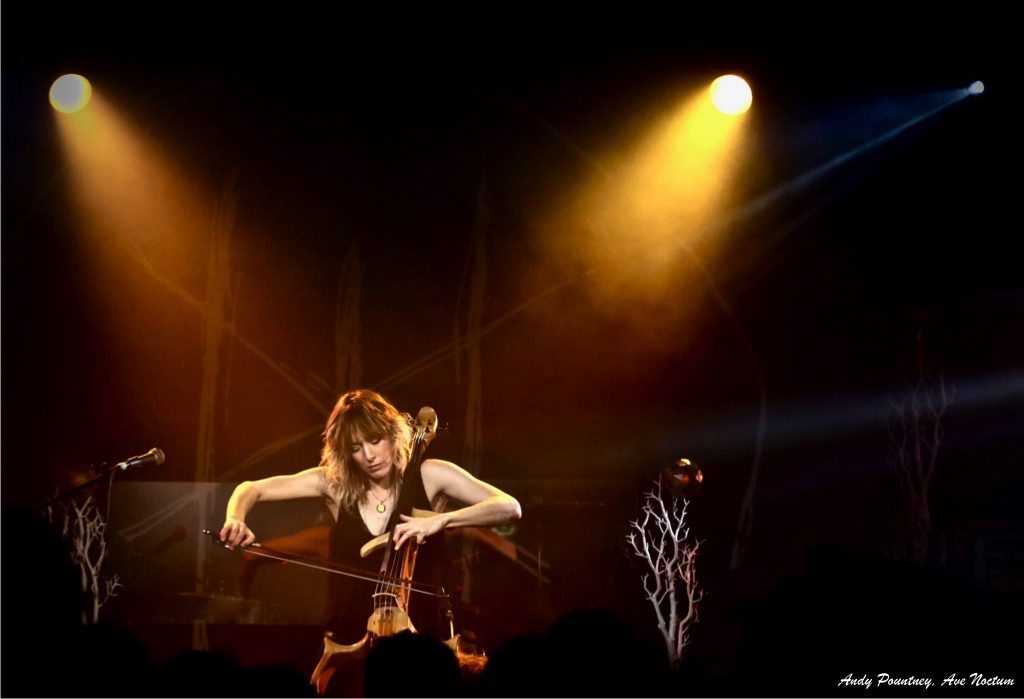 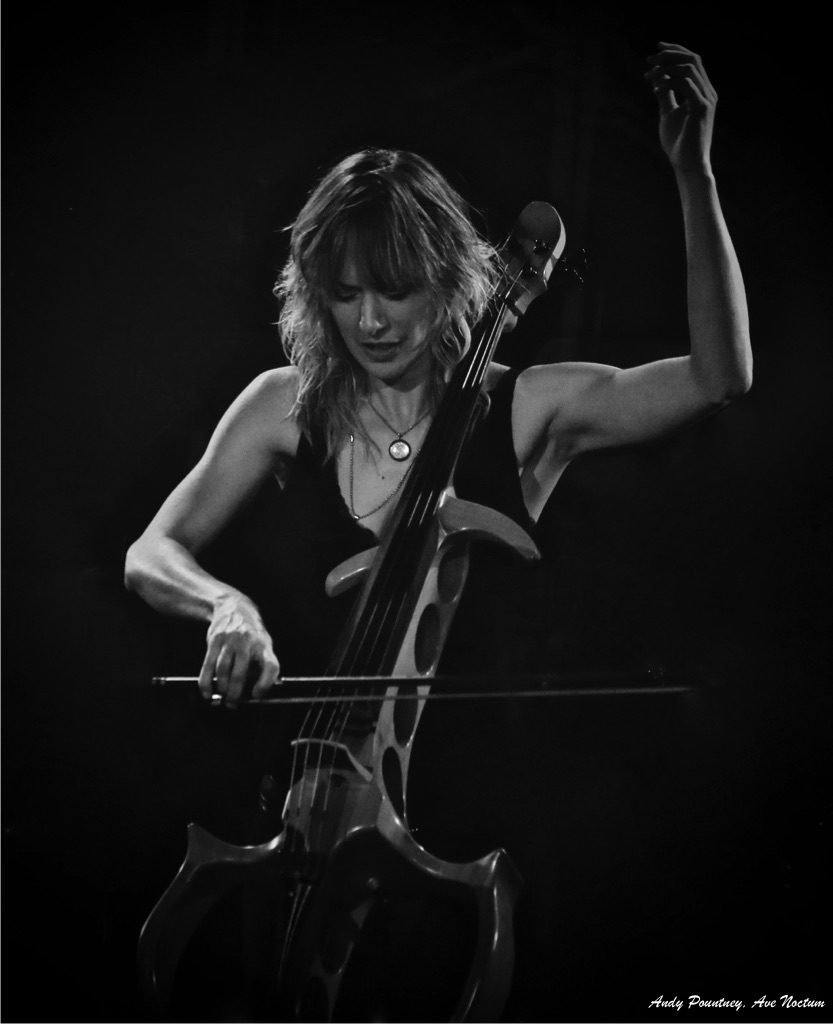 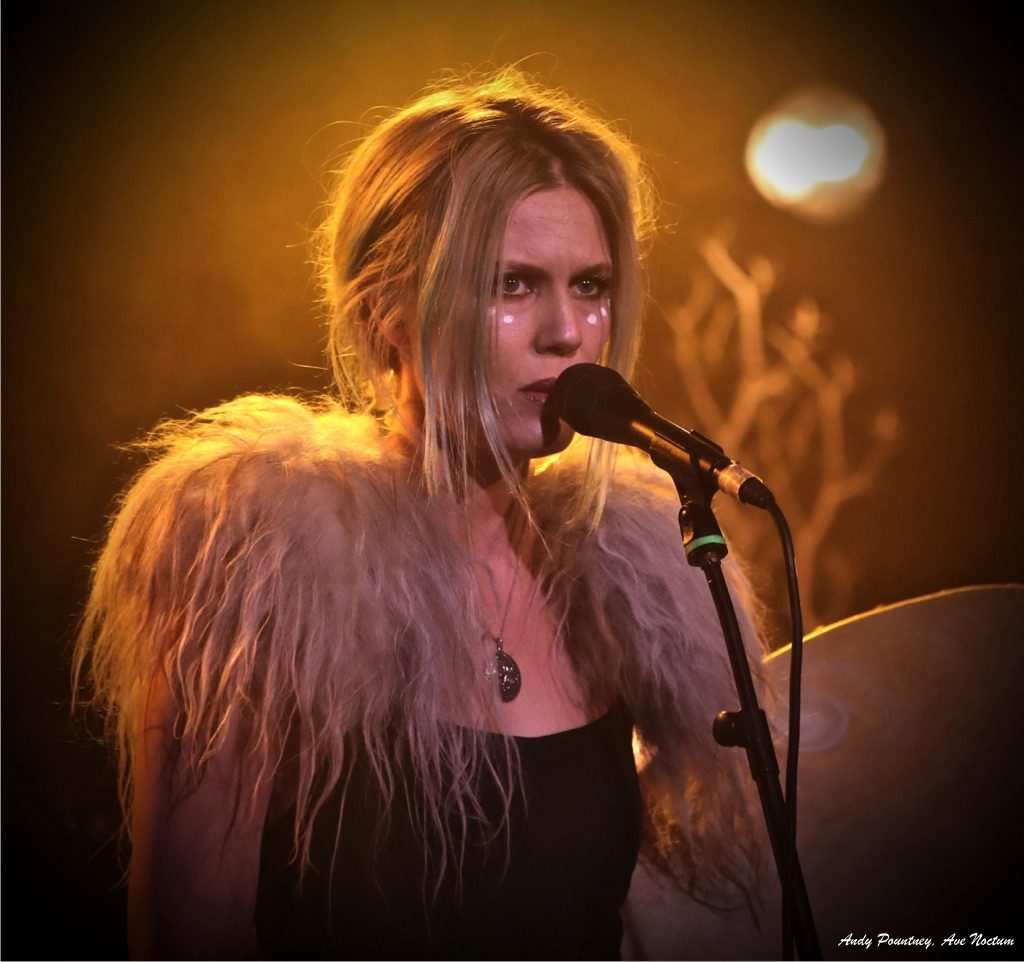 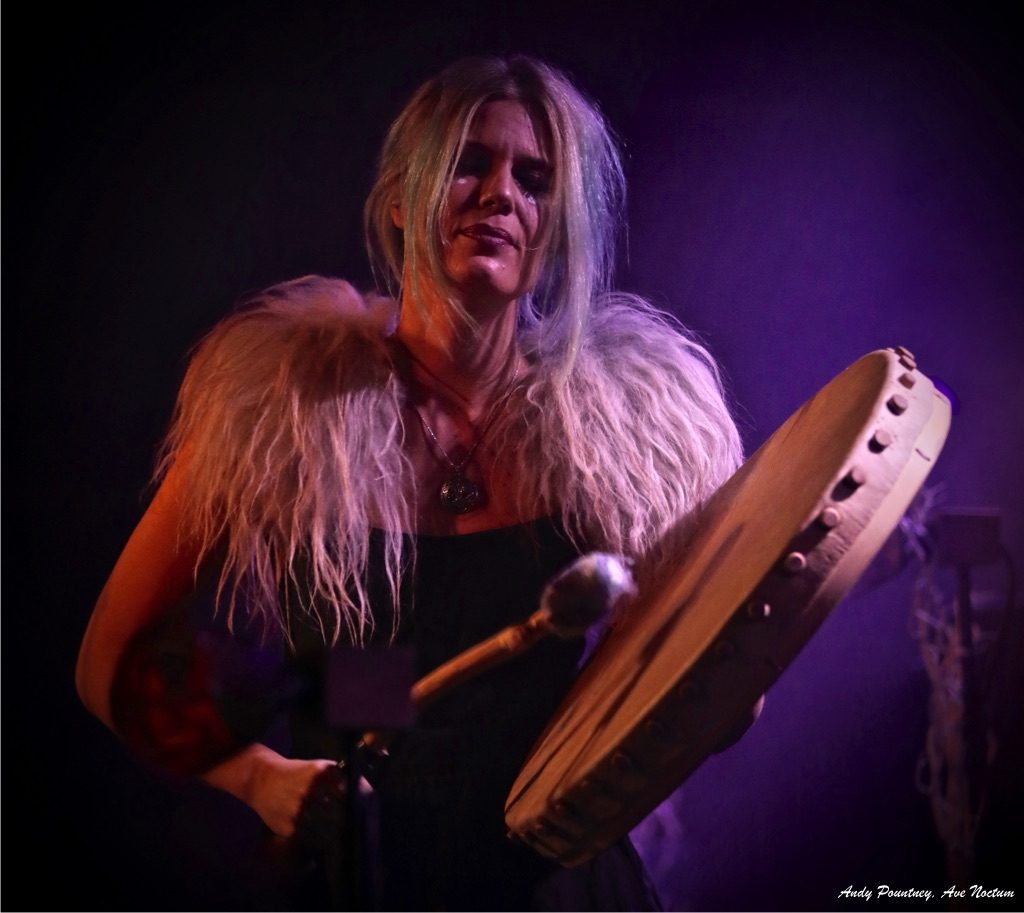 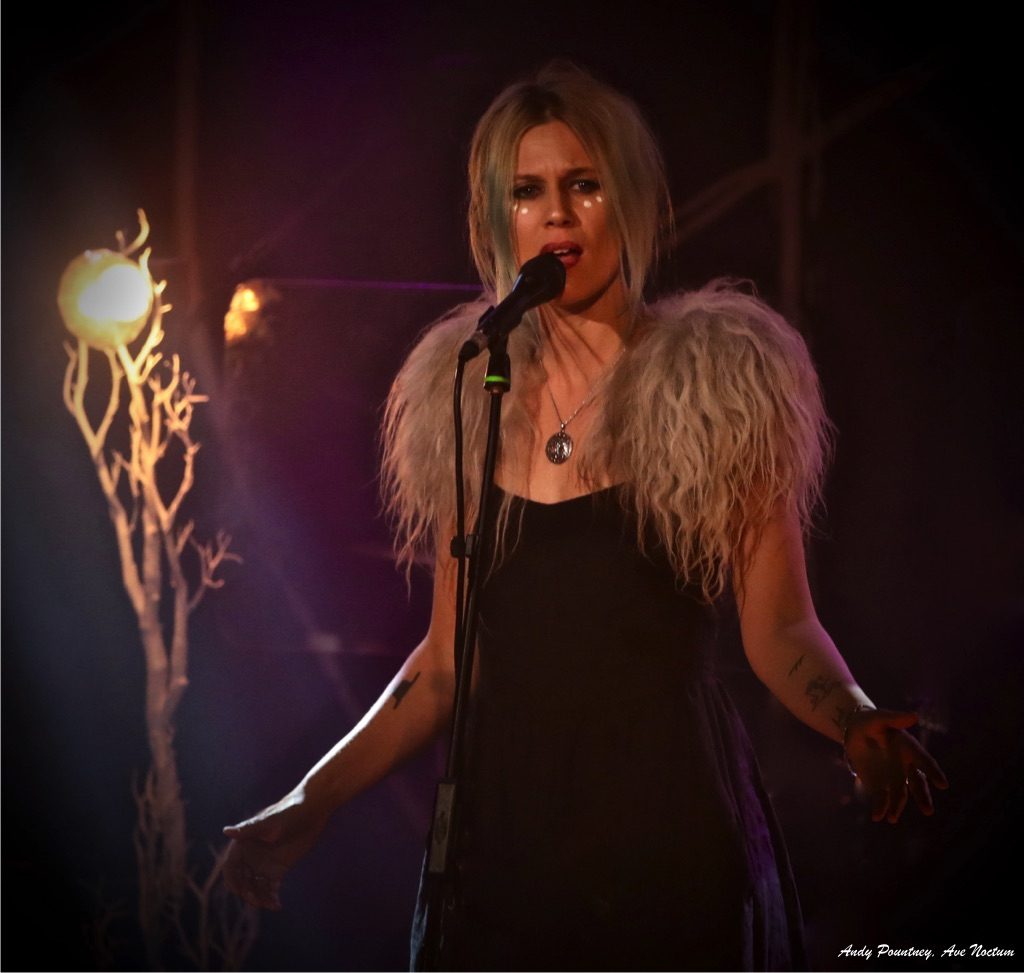 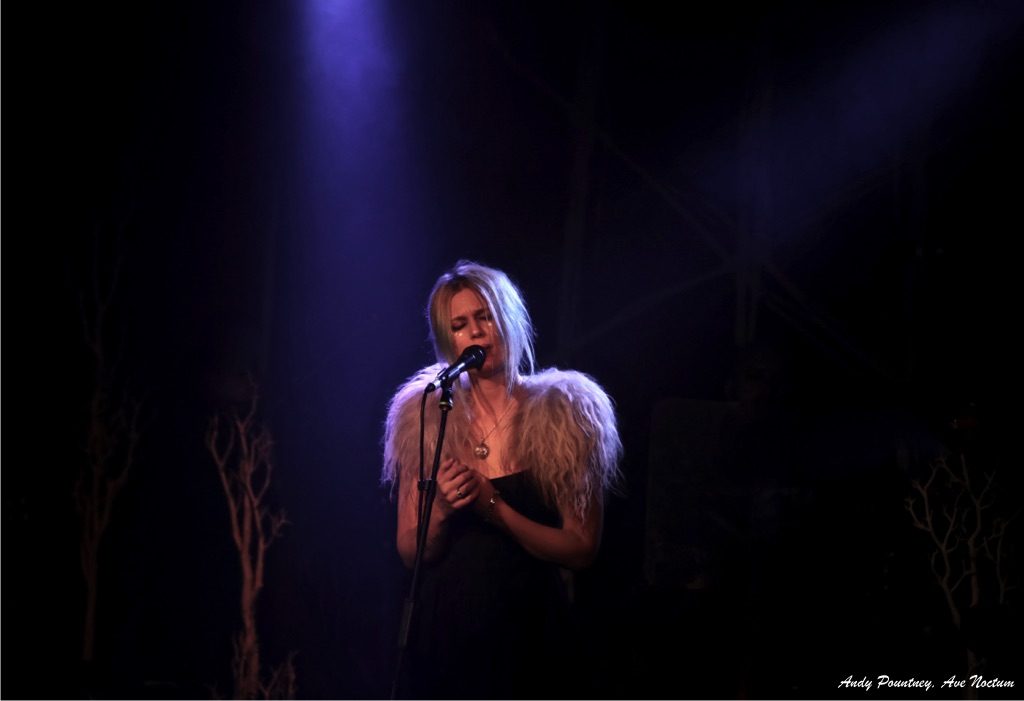 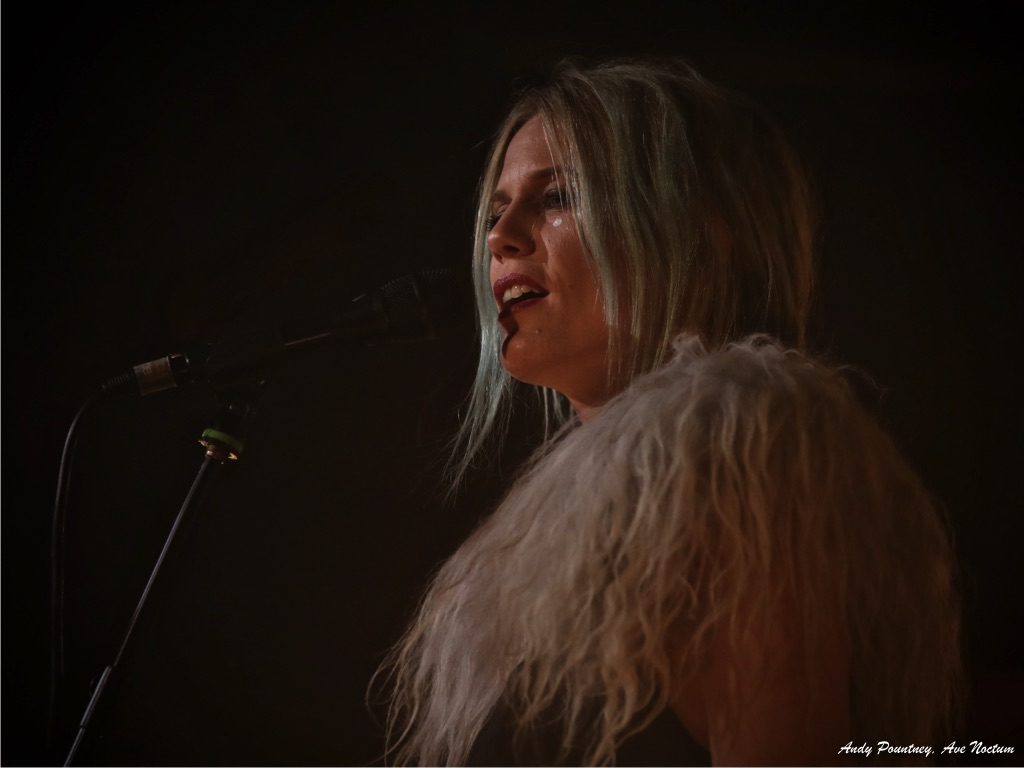 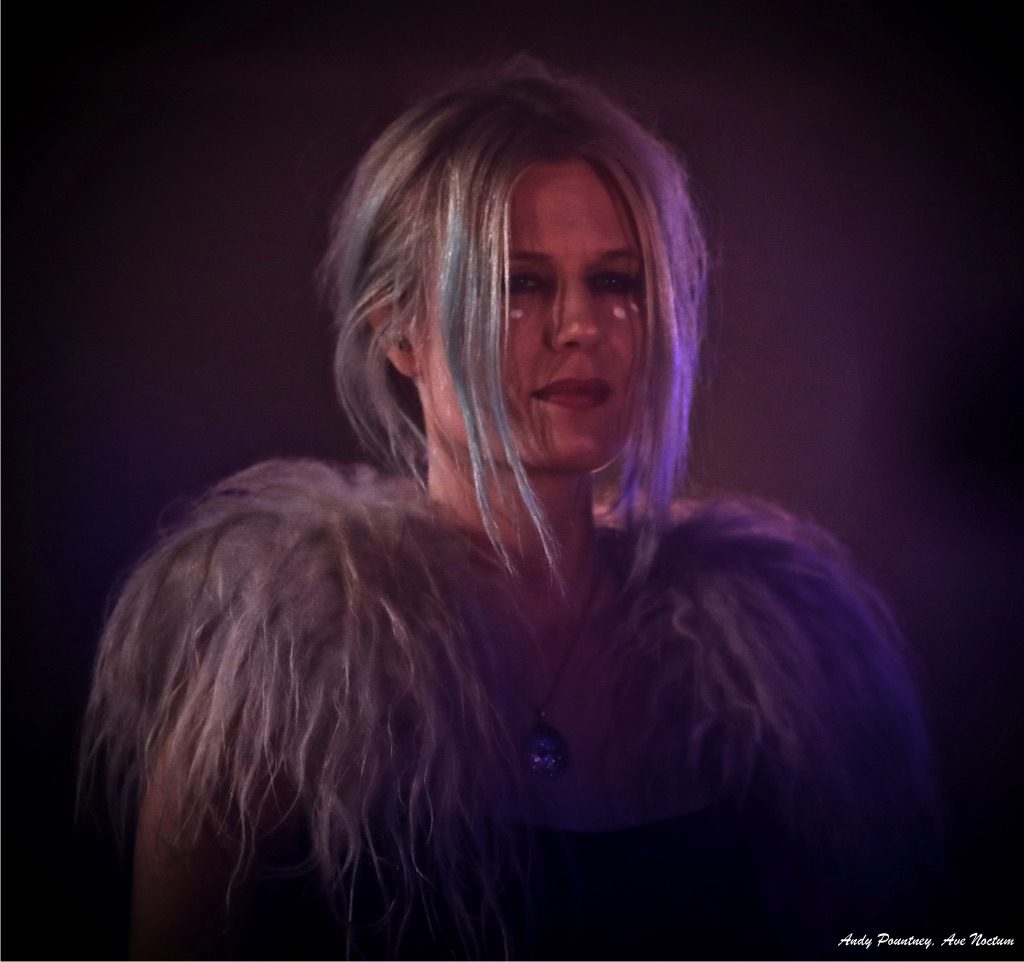 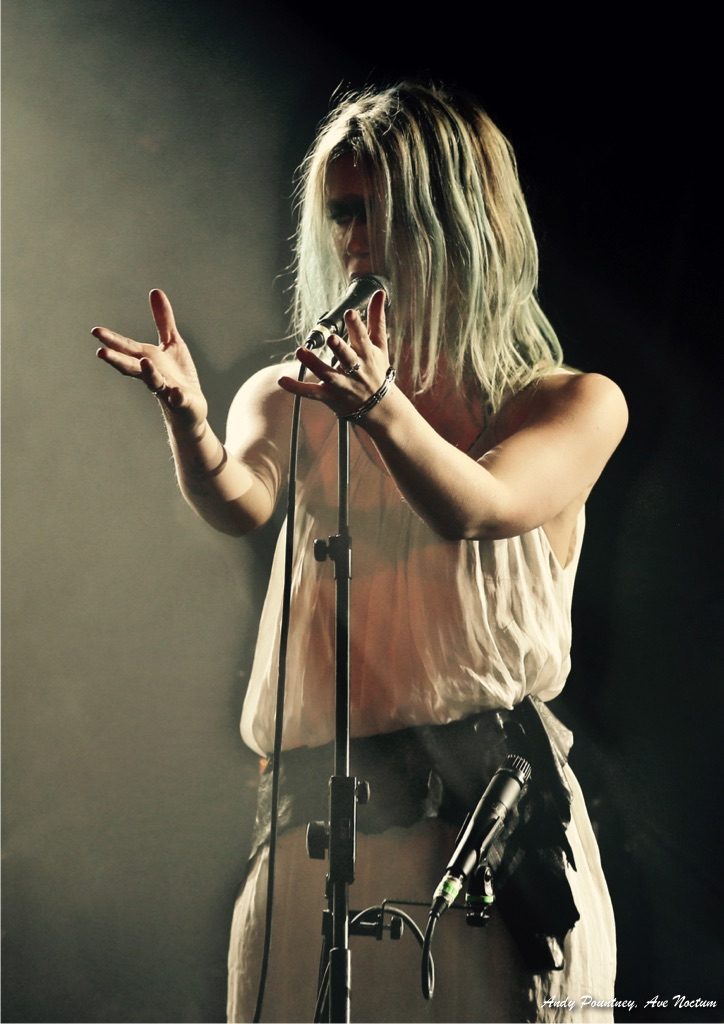 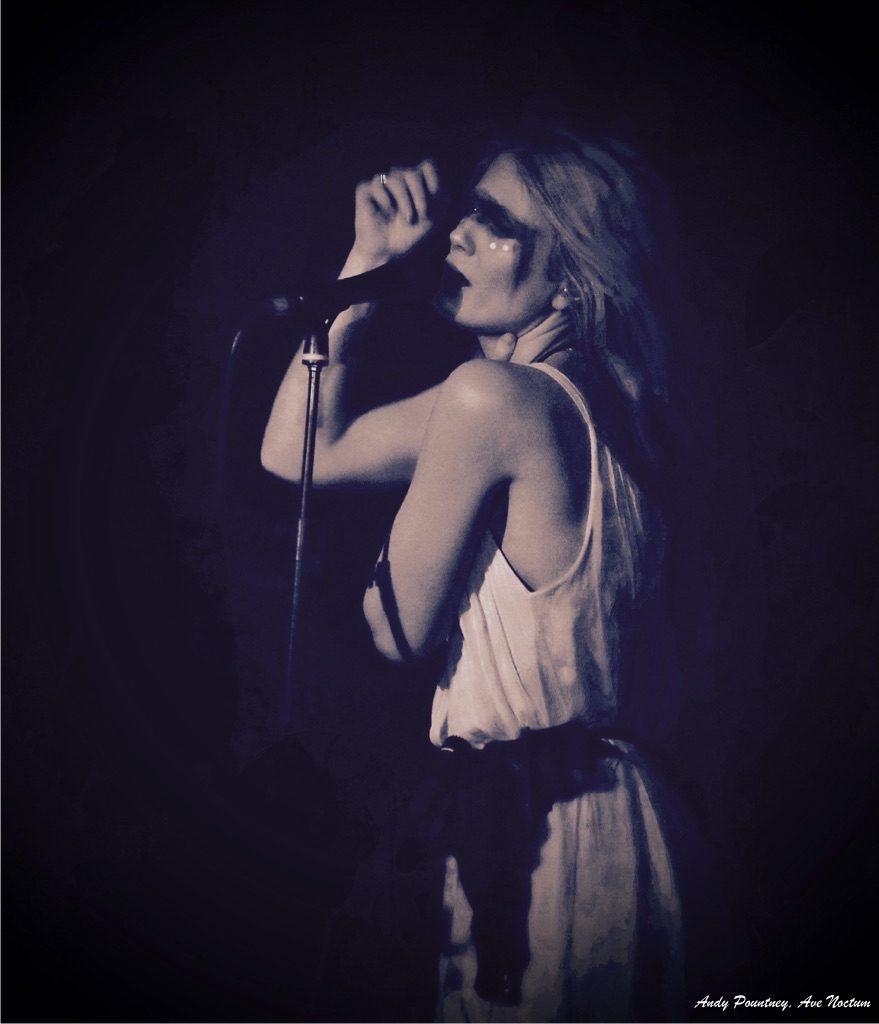 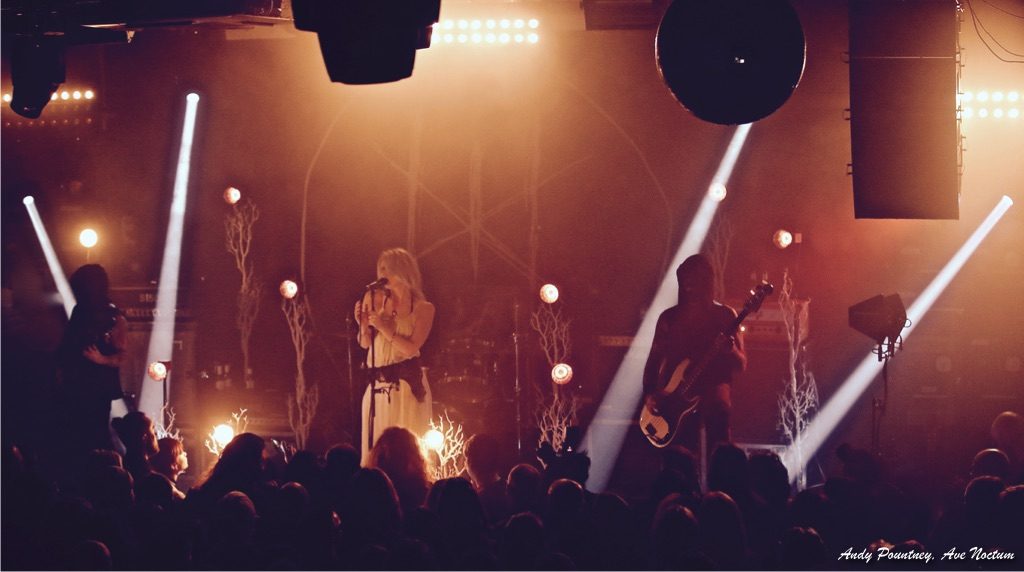 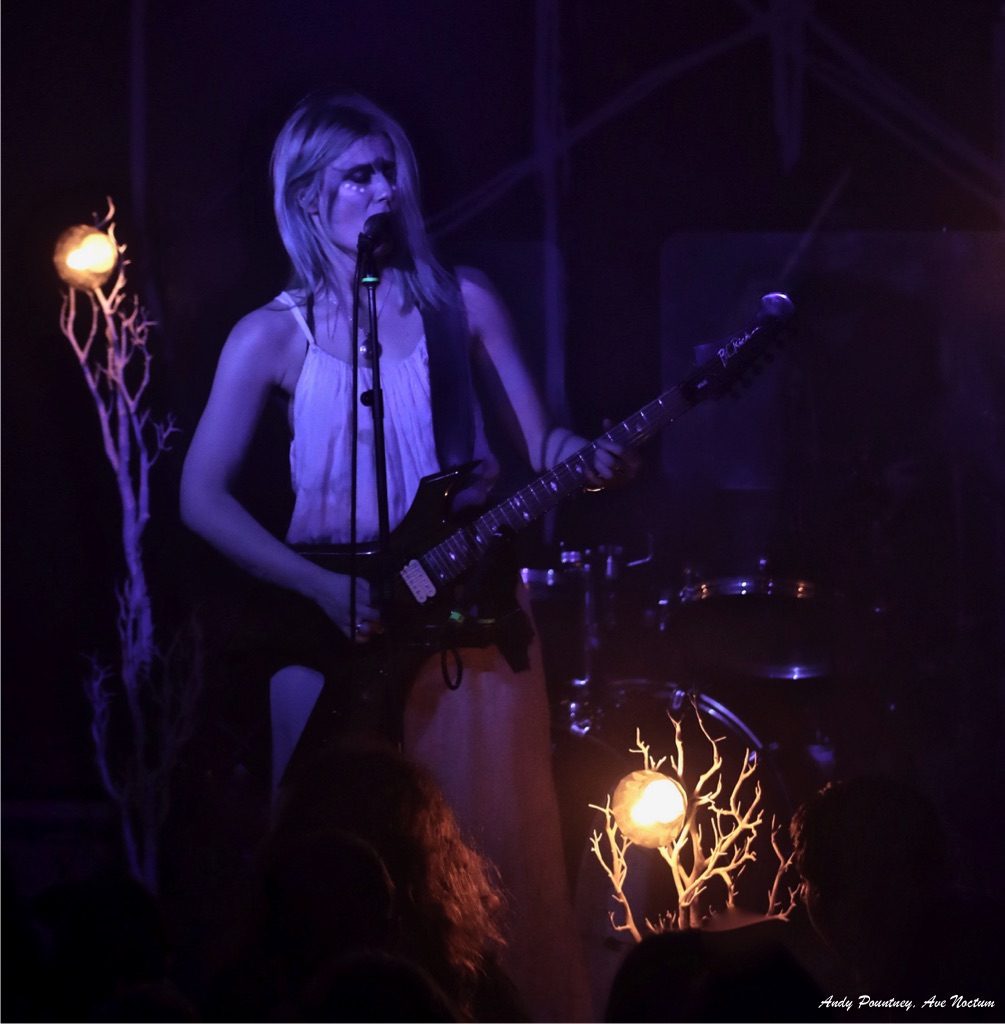 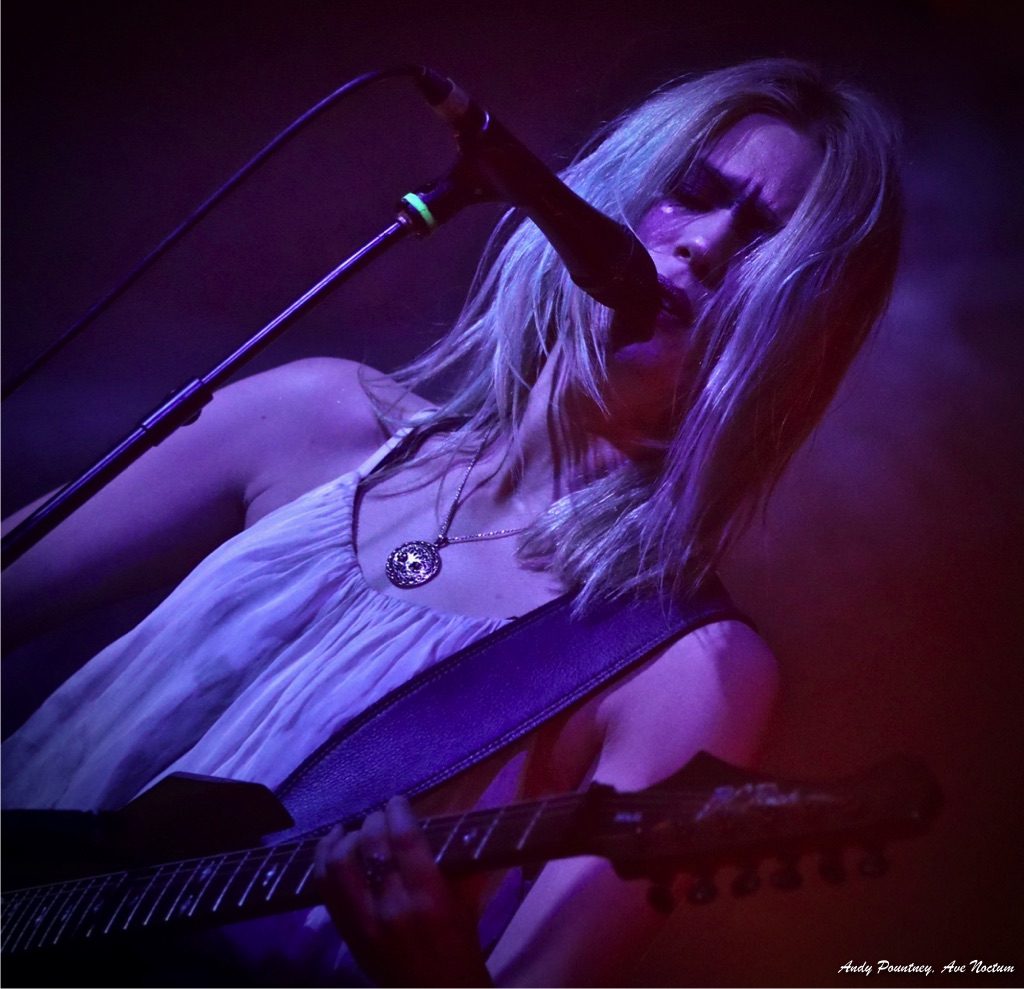 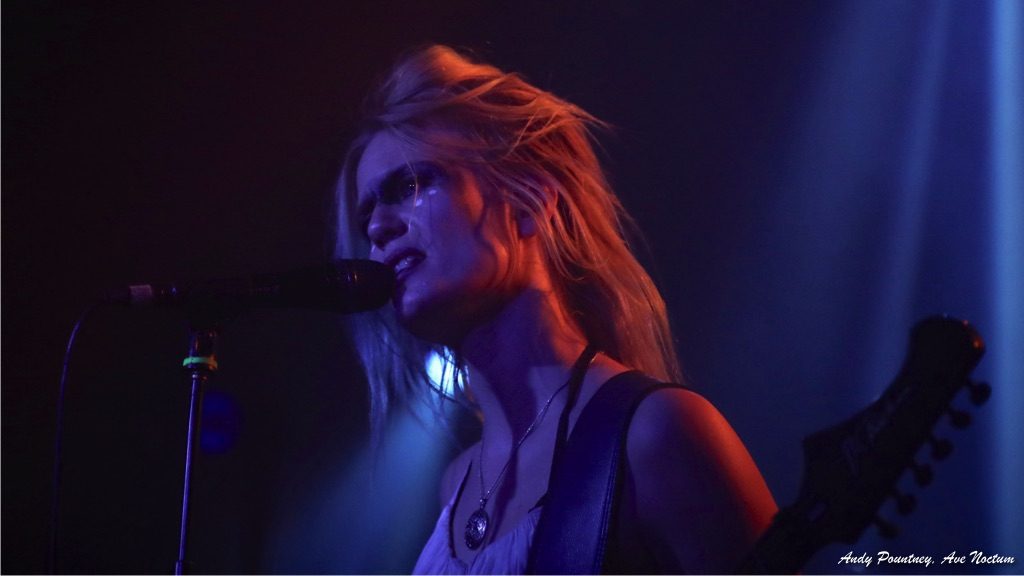 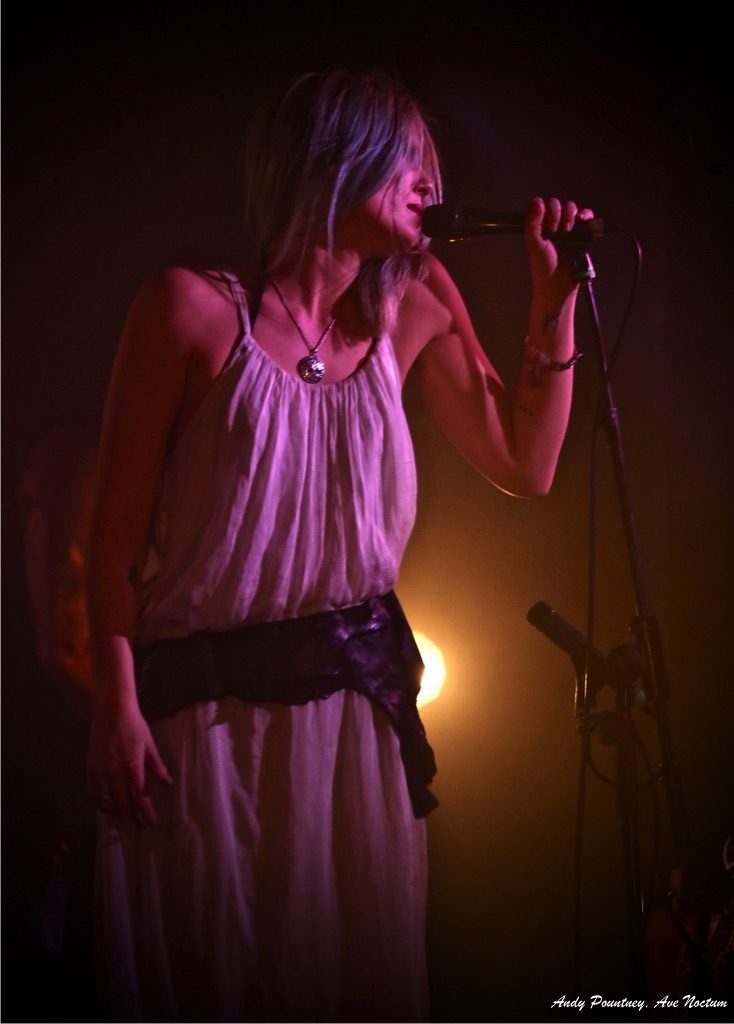 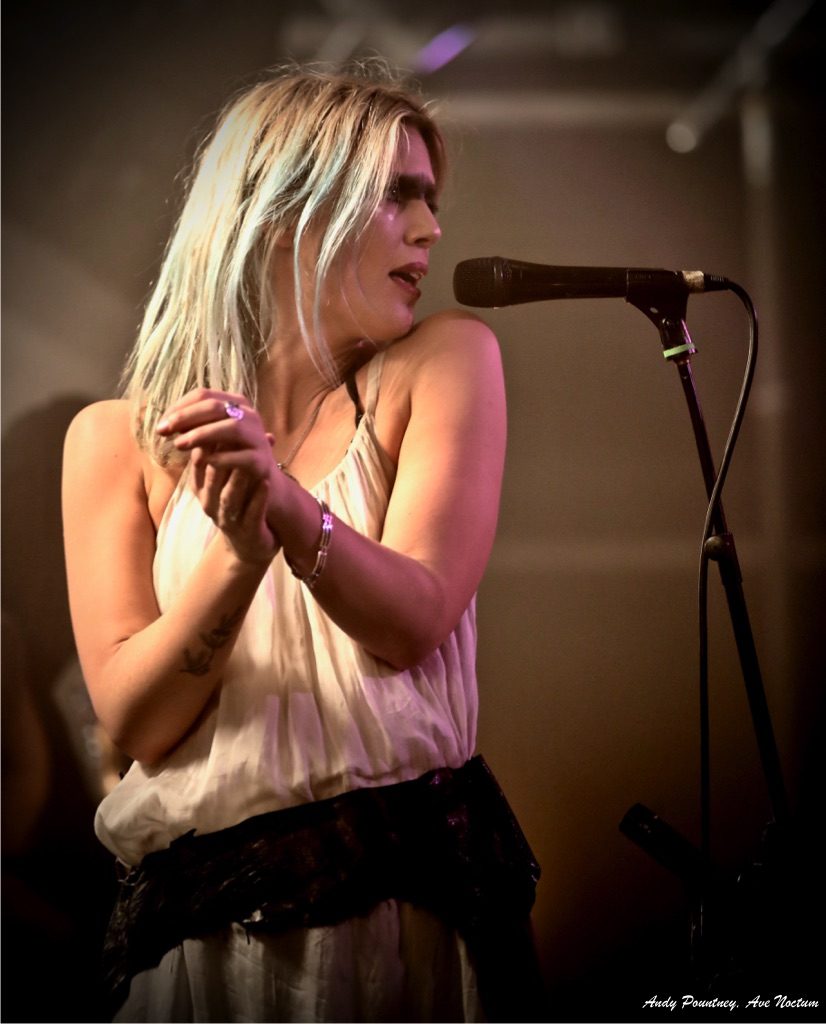