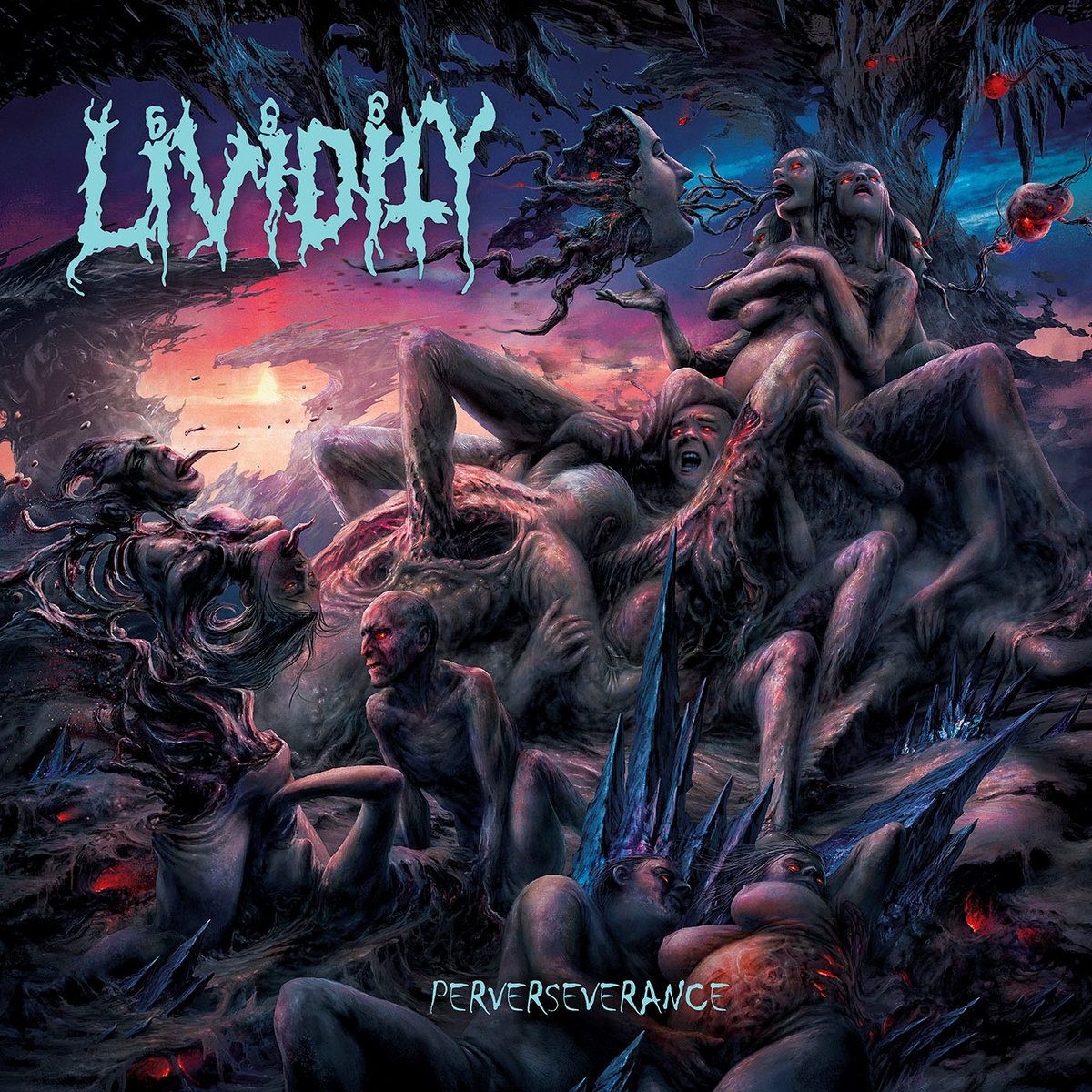 When you get into Brutal Death Metal you have to be ready for a whole new shock factor. If you thought that your mum washing your Morbid Angel shirt back in the day was bad then imagine how she would feel washing a Torsofuck shirt. What I’m trying to say is prepare yourself for some weird looks. Whilst not Brutal Death Metal (but equally extreme) my Meat Shits back patch has caused some heads to turn and eyes to bulge over the years, even at Metal festivals. But then that has always been the attraction to me and I suppose a lot of Brutal Death Metal fans, a seeking out of the extreme. I feel like no other genre pushes the boundaries of acceptability further, so pick up some Slam merchandise and surprise your family at a meal.

One such band whom have piqued my interested and pushed the boundaries for many years, since 1995 in fact are the Denver, Illinois based sickos Lividity. Originally created as a one man band by Dave Kibler, Lividity may well be responsible for the surge of one man Brutal Death Metal projects that would arise in years to come. Later in 1995 Lividity was to become a full band however and after numerous demos and EPs they released in 2000 The Age Of Clitoral Decay. This saw the band spring to the forefront with their catchy, vile brand of Brutal Death Metal and from here they would go on to release four more full length albums, the latest of which we speak of today. Entitled Perverseverance, put out through Metal Age Productions can this album be another tome of sickness?

The one charm I find in Lividity’s music is that it is catchy. It may be frantic, vicious and ferocious but it never fails to stick in your mind in the same way that Cannibal Corpse lyrics lodge in your skull. Opener Kill Then Fuck is no exception laced with manic riffs and speedy drumming there is still room left for the odd anthemic moment. Yet this is merely the start of things to come, with the addition of comical Mortician-style samples throughout the release Lividity’s pestilence is brought to life. There is however a far more polished edge to this album, especially when compared to the bands earlier material, particularly The Age Of Clitoral Decay and …’Til Only The Sick Remain. This album continues the trend of an increasing production value which I personally find a really positive step for the band, even the more melodic riffs on Meat For The Beast are a breath of fresh air.

Perverseverance has a good mix of typically grind tinged numbers in Bitch Cunt Fuck and Parasitic Infestation, nasty, quick and punchy. Don’t let this put you off however some of these shorter songs even incorporate Slam elements, namely Cumming With Labial Pulp and Violated In The Vatican. The Slam feel is something that has always bled into Lividity’s music and has always in my mind cemented them as one of the essential Brutal Death Metal bands, showing all of the genres traits off in one glorious, probably rather offensive package. The final two tracks Pussy Lover-Salvation and Perverseverance are shining examples of Lividity as songwriters. I often feel as if Brutal Death Metal is lost on some people due to the over the top, ridiculous subject matter, but please give it a chance. These final tracks show fantastic Death Metal musicianship which should be applauded and held in high regard.

Overflowing with chainsaw riffs, devastating drumming and sickening guttural vocals that show a sort of range it becomes obvious that Lividity are back. I cannot stress enough the importance of this band historically when it comes to Brutal Death Metal, they are beyond essential in my eyes. I can see myself listening to Perverseverance time and time again as I have done with Lividity’s albums of old, so do yourself a favor, give into the decay and plunge into the vomit inducing force that is the mighty Lividity.