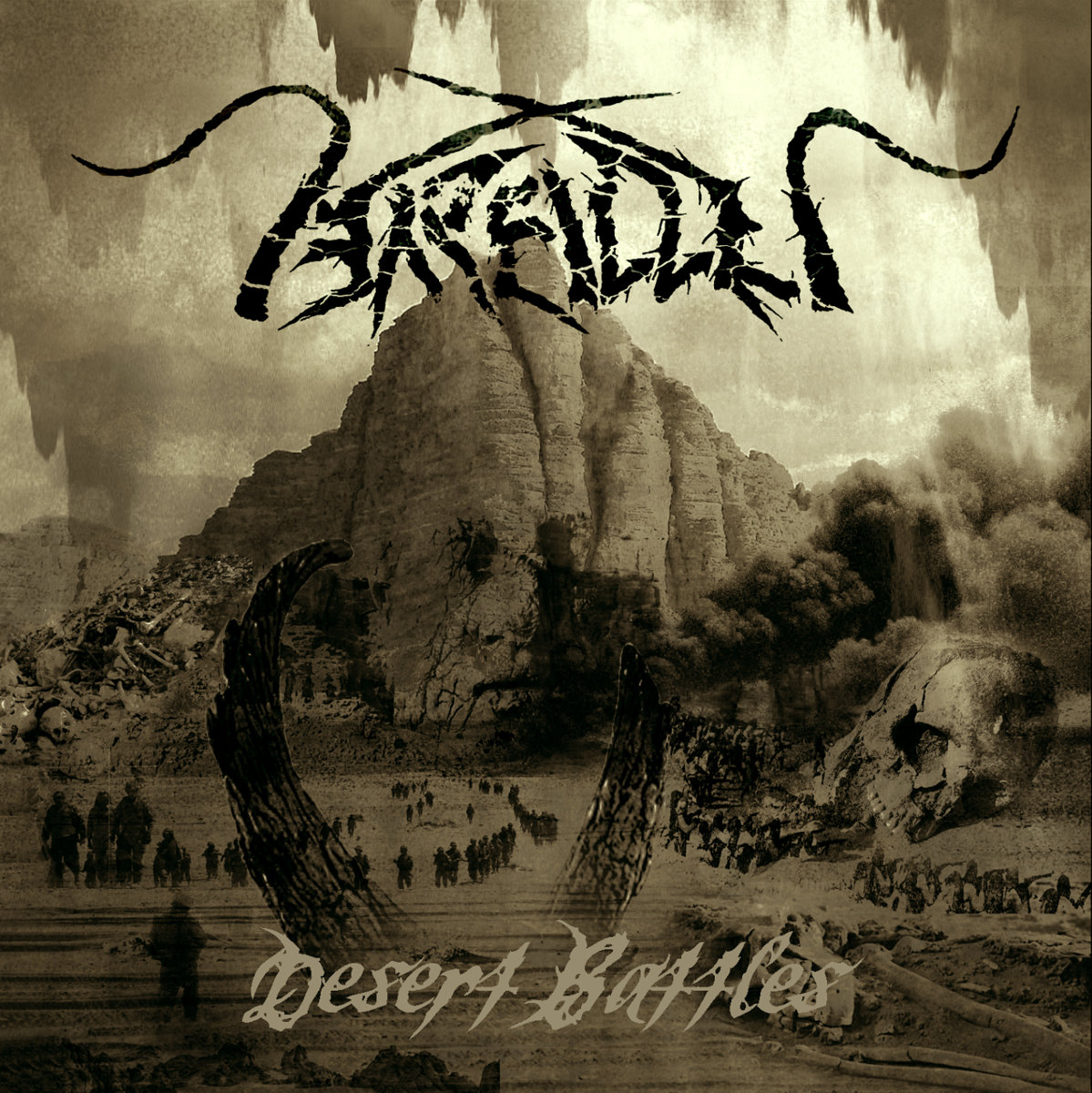 My recollection of Arallu’s previous album “Six” (2017) is of colourful and even spiritual elements within a black metal soundscape. “Desert Battles” is in fact a remixed version of an album, which the band first released in 2009.

It’s evident that Arallu are out to challenge us. After a sombre, eastern-style beginning, suggesting an epic scene, “Old Form of Evil” launches us into a harsh and dirty world of blackened death metal. It’s full on, ferocious and nicely twisted. In fact it’s so twisted that it ends in mid air. I’m not sure if that was deliberate or not, as the next ghastly tale commences. It’s not easy listening as the dirt gets flung crustily to all corners but that makes it all the more interesting. The title track starts with a sound-enhanced representation of a battle, unsurprisingly, before an eastern rhythm blends into another uncompromisingly and deathly assault. The vocals are like didactic statements, and have an air of early Enthroned, notably “Völkermord, der Antigott”, and Rudra about them, but this is one element only of this monster metal mix with its eastern and extreme influences. Those eastern sounds are then cleverly interwoven into the violent and dingy world of “The Demon Curse”. From this we go to the ferocious black thrashiness of “The Union of Babylon”. In the middle there’s a flavour of the Middle East in case we need a reminder of where the band is from or what the title of the track is. Whilst I like the energy, it’s almost as if there’s an obligation to ram in as many effects and atmospheres as possible. Where for me Arallu are at their best is when they are “going for it” head-on, as they do on “Millchama” for two and a half minutes at least before what seems to have become a statutory eastern break. Sometimes this works, but the effect and impact are lost when it becomes an obligation, in the band’s eyes at least. I did like the ethnically-driven outro “The Doom Beating”, but this isn’t it as the band indulge in another bugbear of mine, a bonus track. At least this one “Desert Genii Storm” is in keeping with the rest of it. After some research, I discovered that this moody metal track came from the band’s 2015 album “Geniewar”, but I am none the wiser as to why it was necessary to add it as a bonus track other than the fact it’s in the same style as the others.

I never heard the original version of “Desert Battles” but it is evident here that Arallu have upgraded the sound mix to go with the more old school core. The problem that creates for me is that there’s too much confliction going on, which makes this album difficult to get to grips with. The mysticality of “Six” is not here. I respect Arallu for their all-embracing approach, intensity and sense of adventure, and found “Desert Battles” interesting, but I cannot say I was entirely overwhelmed by the end product.