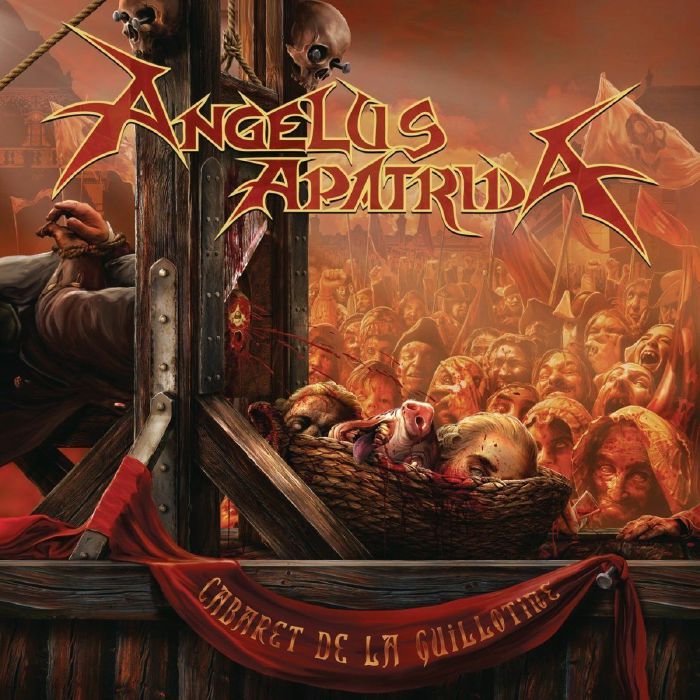 Formed in Albacete in 2000 and sharing ¾ Of their line-up with the Albacete-based neo-classical/prog metal trio Nexus 6, Angelus Apatrida are an uncompromising Euro-thrash Powerhouse who are set to unleash their 6th album “Cabaret De La Guillotine”. With the meaning implied behind the album title, the social climate in the band’s homeland and the usual thrash themes which encompass political and social issues, you can guess how this release has shaped up already. Anyways, on with the show and off with the head (banging).

“Sharpen The Guillotine” has the job of opening the release and it steps up with its head held firm. After the brief Annihilator-esque classical acoustic display, the distortion comes in swiftly and with some lethal sounding guitar lines which are delivered with precision and style, the track soon explodes into a fine slice of 80’s metal. With plenty of riffs, blistering pace, melodic soloing and all-out fret-wankery, it sounds like Mercyful Fate and Exodus creating a musical monster! “Betrayed” which follows it up is a little less explosive on how it is delivered, it brings more of a traditional Euro-Metal feel initially with its chug-heavy approach and sing along feel chorus before it shifts to the headbang friendly section, complete with intricate and tricky sounding guitar wankery. After this track, it’s pretty much thrash ’til done!

“The Hum” is a hard hitting riff monster which has similar qualities to old-school Testament; vocally raw, surging solos and plenty of pace. “The Die Is Cast” brings a slight crossover thrash feel, adding in some 80’s metal elements to thicken things up and even a sweet guitar solo trade-off spot to cap it in style. There is even a thrash styled’ ballad’ in the form of penultimate track “Farewell” which has all the cliché spots you need: clean arpeggios in the verses, emotionally delivered vocals, heavy but restrained choruses and of course, the obligatory speed-up section which features some fantastic riff work and a flair laden guitar solo. The closing track “Martyrs Of Chicago” borrows a page from Metalica’s playbook; it has a very Damage Inc.’ feel to it. Slow fade-in lead in the intro? check. Explosive pace and furious riffs? Check. Massive feel Chorus? check. Shred solo theatrics? check. It is all there and it closes the album well!

in all, ‘ Cabaret De La Guillotine’ is a great thrash metal release. It has the Bay-Area thrash feel but isn’t just a mere regurgitation of it. You can hear the elements which make up the approach taken, but it has that personalized touch from the band. At times the tracks have moments which may feel a little ‘dramatic’, you may find that vocally, it may sound too much like Zetro in places, but the solid mix of thrash and Euro Metal works well and like a guillotine – once it gets released, heads will roll (clockwise or anticlockwise depending on how each individual windmill headbangs!)