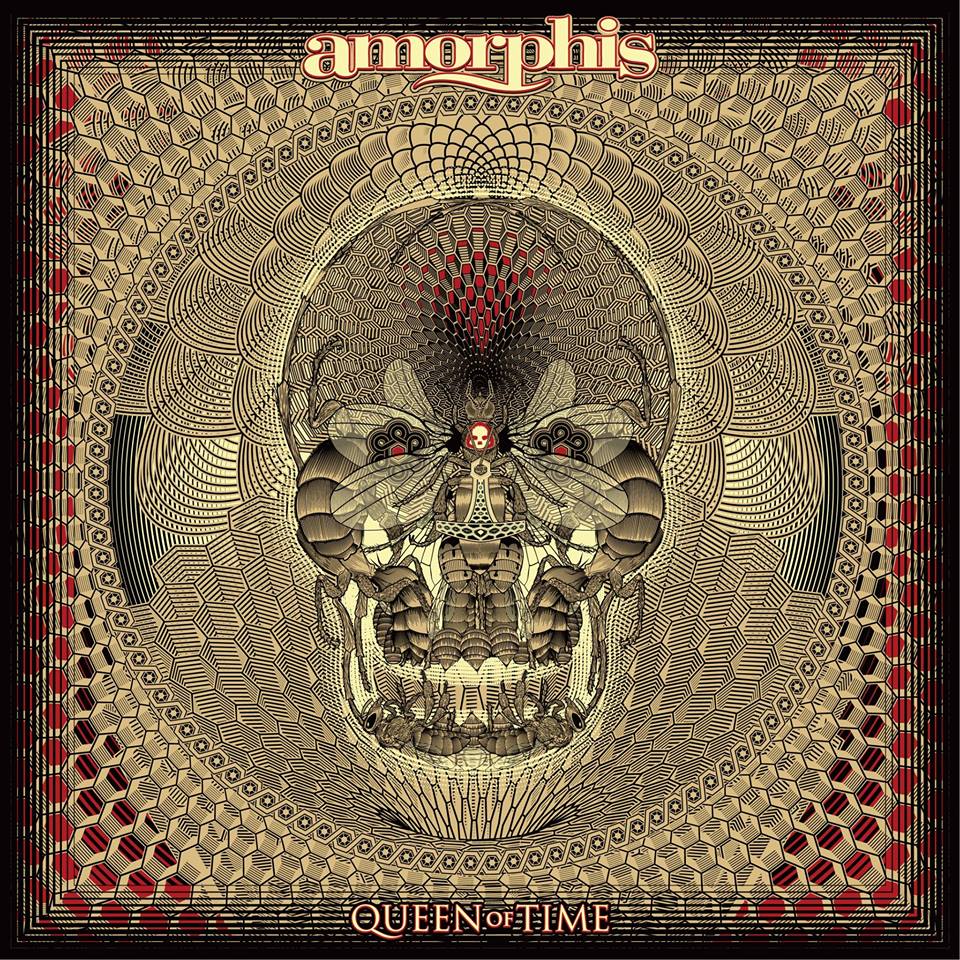 It’s been three years since last studio album ‘Under The Red Cloud’ stormily hit in 2015 making my album of the year in the process and I was quick to call dibs on this keen to hear whether it would be in contention again and if the band could follow such a fantastic release. Should I have even questioned the competence of the Finns in the first place? Call their style whatever you will, melodic death metal, progressive metal, Kalevala folk metal; let’s face it they haven’t put a foot wrong since debut release The Karelian Isthmus way back in 1992. This is their 14th full-lengther and every single one has been full of quality. Along with Dark Tranquillity who they are touring America with soon there are not many groups that have delighted for so long with the calibre of their work and both live and on album Amorphis have to be considered one of the true greats of their age.

It takes just a minute after pressing play on Queen Of Time when we are literally stung by the potency of opener ‘The Bee’ and to be honest each and every one of these ten tracks is pure class and gets straight in the head, practically impossible to shift for days to come. Seriously it must have been nearly impossible deciding which number to first represent the album with and release a single of as they are all so fantastic. For nearly an hour this album has you in its grip and will not let go, I am on about my tenth play now and have found it completely addictive. Although I am putting it down for a break after writing this as soon as I have managed to get the album on disc it will be back on the stereo and it is guaranteed to be played throughout the summer. Yes it is happy and upbeat, even life affirming and although we live in dark times it’s an album assured to put a smile on the most miserable face.

The opening bars are instantly recognisable in their mysterious weave and the bounce and swaggering bravado powers in with Tomi Joutsen moving seamlessly from gravid growls to clean harmonious melodicism. There’s some underlying motifs to sweep you to far off places and as the album develops there’s a fair amount of exotic force at play. Yes that does include more than a little of a Celtic touch and sometimes bands can project this quality in a way that can only be considered twee; not here though Amorphis make everything sound so natural. The power and force, the hooky choruses are all there and the vitriolic romp of a number such as the clamouring ‘Message In The Amber’ which absolutely swaggers amidst the tale it tells is nothing short of glorious and bound to have people stomping away as they play it live. Add to this some choral parts over the top and a furrowing beat that would make a band like Turisas decide to put down their swords and go home. What you have here is a proverbial whopper of a track and it’s far from alone. Things are tempered with passages that are slower and allow stories to breathe and these are naturally epic, a spoken word part on ‘Daughter Of Hate’ adding to the fantastic atmosphere as does the cold swirling snowy atmosphere heralding in ‘The Golden Elk’ before it breaks cover and magnificently canters off. There’s death grunts, roars and plenty of passion as it’s hunted over rugged terrain and you’ll be singing along every step of the way as it makes its escape; what a wonderful chorus this one has. Proggy tendencies are explored with vast mountainous vistas unfolding on ‘Wrong Direction’ and the musicianship sparkles as Tomi sings his heart out on a song that’s another massive blockbuster full of glory.

It’s almost impossible not to mention each and every song here, they are all simply fantastic but with a gun at my head forced to pick favourites it would have to be the double whammy of the 8th and 9th. They may well be the two shortest tracks on the album but are packed to the brim with emotion. ‘Grain Of Sand’ with a melody that drops you in the Saharan desert is full of mysticism and intrigue and a heady stomper with a marvellous clean sweeping vocal performance and forceful beastly growls. You really find yourself desperately wanting to read up all about lyricist Pekka Kainulainen’s fantastic ideas over the album, none more so than here though and the powerhouse fury of the song at full belt with proggy madness flailing through it strikes as one of the greatest tales ever told. You may have missed certain elements along the journey such as guests Chrigel Glanzmann (Eluveitie) on pipes, laryngeal singer Albert Kuvezin and saxophonist Jørgen Munkeby (Shining) but the accompanying vocals of Anneke van Giersbergen knocking you into a swooning mess on ‘Amongst Stars’ are going to knock you into another universe. In a word, “wow!” The only problem with it is wanting to play it again as soon as it has finished, which would be a mistake as ‘Pyres On The Coast’ slow-burning finale would be sorely missed.

Maybe Amorphis sound strong enough not to need an orchestra and a choir on this album but the additional elements certainly do them no harm either. What’s left to say apart from what an absolutely fantastic album (but I think you have gathered my thoughts on that by now). Yep they have done it again and ‘Queen Of Time’ is an album for all times and one that is going to take more than a mere king to dethrone it. Music simply doesn’t get any better than this and you know what, for the first time ever in well over a decade of writing there is only one mark I can give this