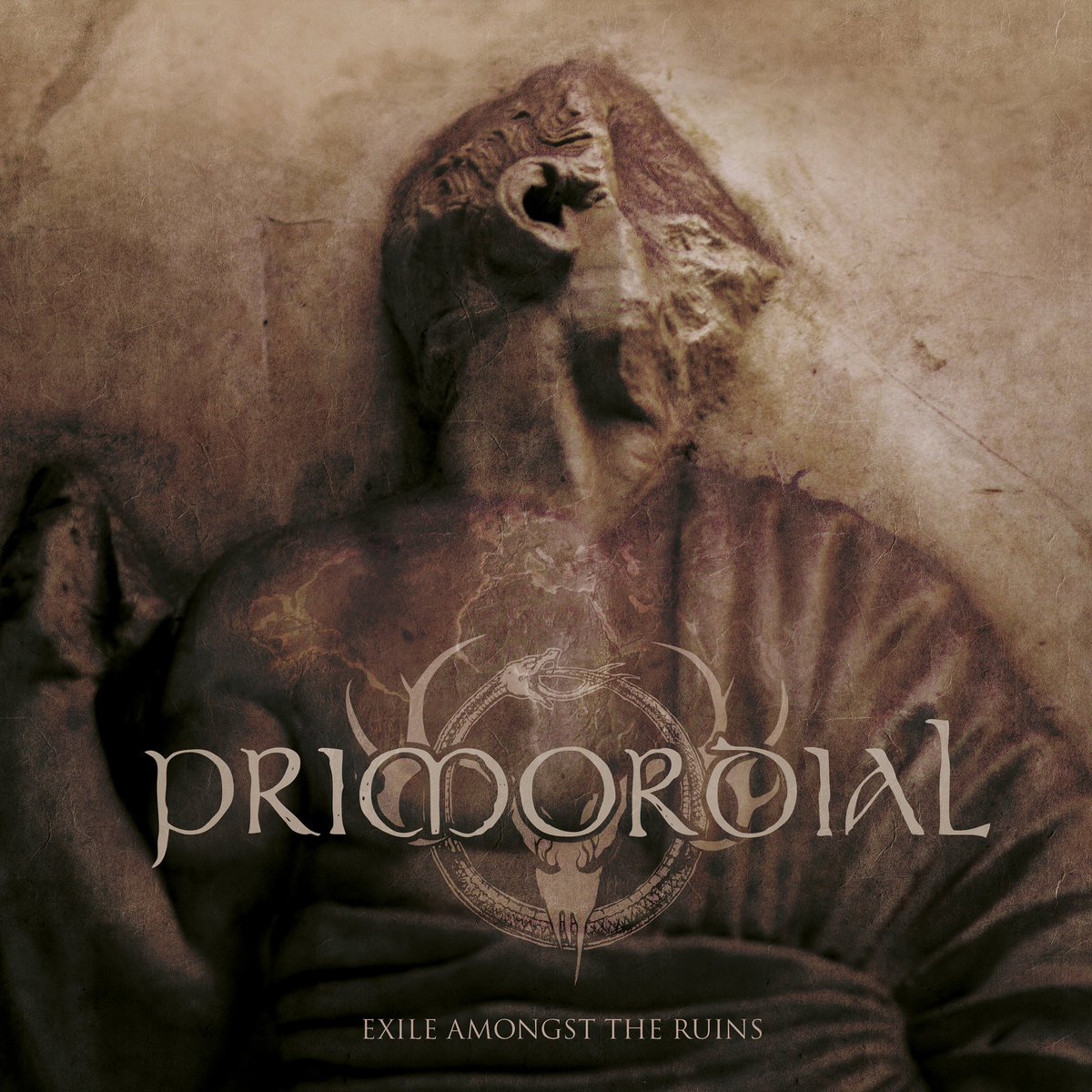 Primordial barely need an introduction. A back catalogue reaching back to the mid 90’s and an enviable reputation as underground metal stalwarts, their reputation is sealed. Ninth full length release, “Exile Amongst The Ruins” finds the band bringing a raw feel, looking back to the old school ways. The band cite the source of this rawness on their lack of opportunity to get together as often for pre-recording preparations and the resulting studio time spent crafting songs’ through sheer hard slog and, sometimes some tension. Thematically speaking, front man A.A. Nemtheanga shares the idea of “…the loss of our spirituality and our suicidal headlong journey into amoralism and decadence..” as points of lyrical inspiration although this is not a concept album as such.

A tribal beat sets up a sweet riff full of urgency on opening track “Nail Their Tongues”. Folk tones surrounded by darkness lay an early foundation for the style and structure of this new album. This is a rich, grand introduction that lyrically is full of power. Urgency and chaos rise mid-track providing more blackened textures while the circling percussion creates pure majesty. A galloping mix of Iron Maiden meets Killing Joke with a thin, razor edge U2 spike arrives in the form of “To Hell Or The Hangman” with its’ irresistible momentum driven by drummer Simon O’Laoghaire and hooks that are attention grabbing. However, the real gems lie in cuts like “Where Lie The God’s” and the title track where heavy, blackened textures mix with ancient, tribal styled drumming conjuring mystical auras. The raw, natural feel the band alluded to is here in all its’ boundless glory. The vocals are full of drama but it’s the undeniable conviction with which they’re delivered that provides the power.

Ciarán MacUilliam and Michael O’Floinn’s riffs blend and twist the album; bold and expansive one moment, taut and driving the next. The grind of “Sunken Lungs”, inspired by the skeletal remains of a ship wreck and brought to life with a shuffling beat that builds and heaves has an evocative beauty balancing delicacy and unrestrained power reflective of its’ maritime theme. The final screaming guitar feels like a statement of loss leading into closing track, “Last Call” where the sumptuous, Celtic folk tones that have percolated through the album find their climax. Soaring, imposing riffs along with vocals that seem to find new ways to climb higher underpin a lyrical insistence where a sad contemplation of the world combines with an almost contemptuous disgust. The veterans create an intense drama that’s totally absorbing and effectively creates an ambience of loneliness and loss as the album gently fades and we’re left to contemplate.

Primordial’s credentials remain solidly intact. “Exile Amongst The Ruins” feels completely natural and shimmers at times. Newcomers will likely be convinced to delve into their catalogue whilst the faithful should be well pleased with this latest effort. This is an album full of passion and dynamics that compliments the band’s legacy.