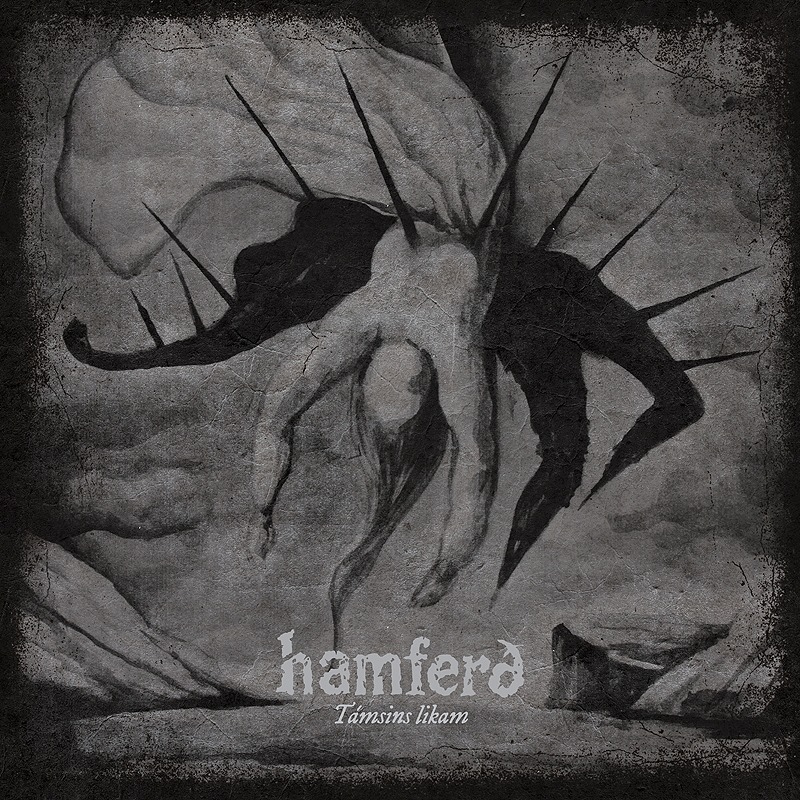 Hamferð are a Faroese doom band, a sextet which means with all the other bands and artists currently sailing forth from those tiny islands most of the population is in a band. Actually judging from what I’ve read of them, that may actually be true…

The name Hamferð apparently is an apparition of someone on the verge of death appearing to their loved ones as an omen. The album title means something like Body Of Most and like the title the album is sung in Far less so that’s the extent of my understanding of the contents I’m afraid not having a translation to hand. It is also the third part of a kind of reverse trilogy or something which began (or ended) with their debut EP and continued with their debut album.

From the quiet opening notes of ‘Fylgisfog’ there is a distinct air of quality about Hamferð, a steady stately poise accentuated by the subtle strains of strings before the rich, expressive clean vocals gently come in. There’s something to it that even without having been given the doom tag just leaves you waiting for the riff and the death vocals to come in. And they do. The sound which then glides in has a beautiful combination: We get the curling notes at the end of the riff which remind me of 40 Watt Sun when they were a doom band, the superb clear, clean vocals that are reminiscent of Khemmis just maybe even better, and the feel of the song which has that restless turning and ebb and flow of oceanic funeral doomsters Ahab. It’s actually a kind of dizzying combination, and a rich presentation too. The musicality on display here is almost breathtaking, particularly when those clean vocals come through; you feel your heart swelling with the music, trying to reach up with those notes. The arrangements are deceptively complex with the variety of keyboard sounds utilised, but still unfussy and quite capable of gentle simplicity. They can change things up, too. ‘Frosthvarv’ for example is a lilting little song for the most part, something about it reminding me of early Beyond Dawn, so you can see the kind of quality here.

Downsides are few and far between really. I’m not sure if it might just be their quality but the clean vocals are so good, so warm, that I can spend a great deal of the time waiting for them to take over from the death style. It’s something that, for example, the band Hamferð sound most related to, Ahab, have conquered some time ago and have found a more comfortable balance. I also get the feeling that there is very much a theme if not a tale to be told here but without a lyrical translation I have to rely on the flow of the music itself to lead me (entirely possible of course), but whilst I get the sense of the album as a whole, the movement between songs doesn’t quite work as well as the quality suggests it should. I have the horrible feeling though that a lot of people will be incredulous of that when they listen, but it’s how it struck me when compared to, say The Board Of The Glen Carrig.

Look I’m not going to end this on a downer. Hamferð exude class and quality like few other recent death/funeral doom bands I’ve heard. If you like any of the bands I’ve mentioned, or just have a love for the form then I would suggest you check this out. I’m going to have a little delve into their back catalogue too. Seriously a cut above.