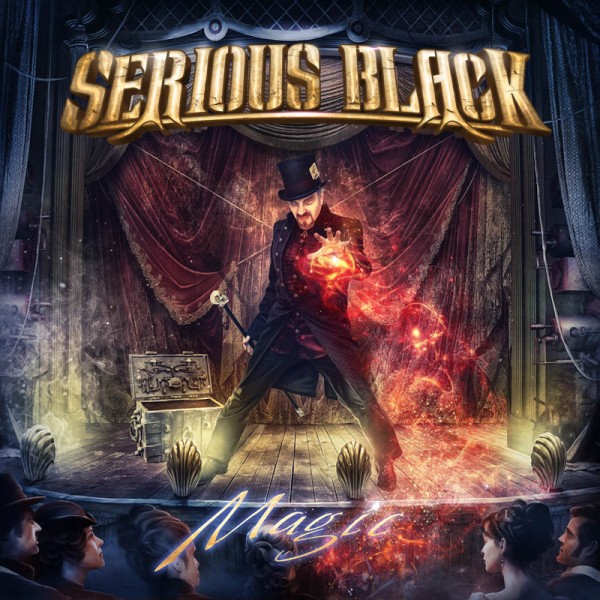 Three albums in as many years is a feat many established bands have long since forgone, making this something only seen in the past. Thankfully, Serious Black are bringing this trend back, matching the sheer drive of bands with ‘lesser profiles’ by pumping out high quality releases. ‘Magic’, the third release from this European all-star super group looks to continue in the footsteps of ‘As Daylight Dies’ and ‘Mirrorworld’ so let us see what these folks can conjure up.

The narrative “Tip of the Hat” opens the album and it is simply some ambience and spoken word, nothing much but props for the clever wordplay with the title. Thankfully the real show begins with “Binary Magic”. Powerful sounding, fast paced, furious, this track cuts right to the point and hits with real intensity. The pseudo-thrash edge laced into the riffs and the solid vocal delivery hammers home what proves to be an excellent start to the album and from here, it continues in a like-minded fashion. “Burn! Witches Burn!” has a powerful but catchy melodic aspect to it, driven on by its surging rhythm and captivating dynamic vocal delivery, it crafts a gripping story in its lyrics and brings forward some excellent shred-soloing and keyboard wizardry… Don’t forget the anthemic sing along choruses!!!

It’s not all fast paced and adrenaline fuelled on this release. “Now You’ll Never Know” is a melodic, hook-laden sing along with some real kick to it, packing some fantastic sounding melodic progressions and great vocals and later on in the release, you can detect shades of early 2000’s Sonata Arctica on tracks “Mr. Nightmist” and “The Witch Of Caldwell Town”, both brimming with catchy melodic lines and plenty of drama and flair. Though as good as these tracks may be, the magic bringing them alive seems to hit a plateau of sorts. Some tracks fall into the expected realm of chug-heavy power metal which can be enjoyable, but it lacks that spark to really capture the imagination and it seems the later stages of this release suffers from that, almost as if it peaks halfway through the album. Still, despite this, the pseudo-titular track “Serious Black Magic” does have some blatant band name dropping and a real corny 80’s metal kick to it, similar to that of the titans Helloween and “Skeletons On Parade” has some fantastic guitar skills on display, including a phenomenal guitar-synth solo trade off!

In all, ‘Magic’ has the ability to capture the imagination like all good Power Metal, but in comparison to its predecessor albums, it doesn’t stand out, nor does it lag behind, it just sits there, almost shoulder to shoulder with them. With clear displays of progression and an evolution in the band’s style and sound, but a core approach which remains, giving it consistency and solidarity, ‘Magic’ might entertain many, but for some, we can see that the Rabbit being pulled out of the hat was the last trick it could play.