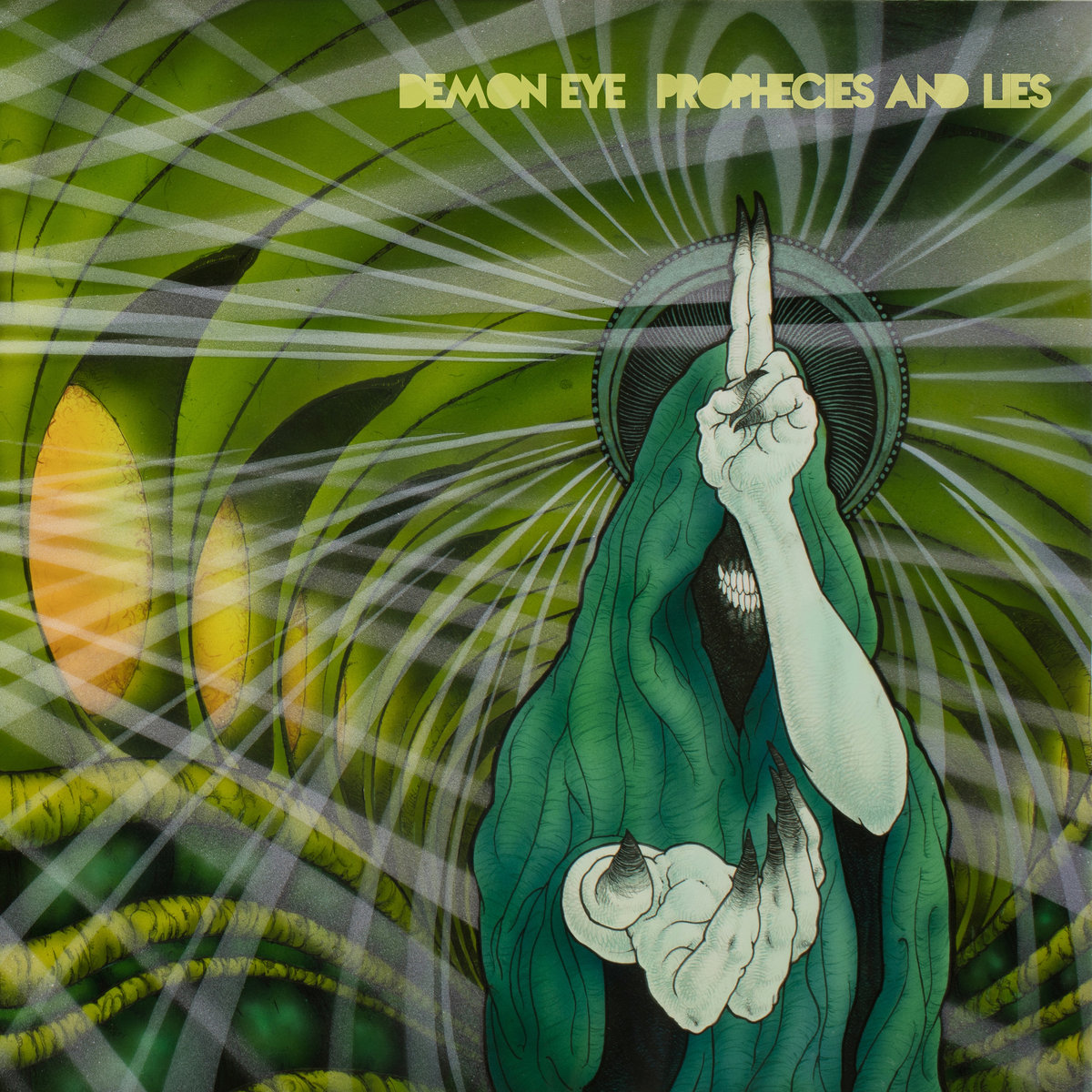 Was it really a whole two years ago that I was sitting down at this very keyboard to review Demon Eye’s last rather good release ‘Tempora Infernalia’, I rhetorically ask? Yep, a quick check through the archives of my laptop and Ave Noctem confirm this, and on that occasion I gave the album a solid and well appreciated 7.5/10, and even with all the music I get sent, purchase, and such intrusions as work that prevent me listening to all the music I would like to (First World Problem, I believe), that one still gets the occasional spin, and I was more than looking forward to seeing how the new release ‘Prophecies and Lies’ would stack up in comparison.

Well, the band certainly know how to start strongly, ‘The Waters and the Wild’ declaring its presence with a crescendo of guitars, drums and bass that blast into the sort of stripped back galloping riff fest that was that was the sound track of my youth as Demon Eye channel their inner Budgie. This clear love of classic acts that helped establish the genre that is metal continues solidly with ‘In The Spider’s Eye’, effortlessly mixing proto-metal with the dark leanings of early Pentagram, whilst follow up ‘The Redeemer’ is a slice of uncomplicated foot stomping hard rock.

‘Kismet’ adds a new element with harmonised twin guitar riffage straight from the early days of the NWOBHM. Imagine if you will a less punked-up Dianno era Iron Maiden work and you’d be bang on the money, before the sound became too intricate and too “look how clever I am” complex; it really is a track to have heads banging and studded leather glove clad fists pumping. For track after track Demon Eye stick to this formula of combining classic elements with an enthusiasm and energy that shines through, never straying into the realms of the over indulgent, keeping the numbers down to a snappy three to four minute mark, allowing them to pack eleven tracks of retro-tinged goodness into the album, but each having the obvious potential to be expanded and built upon in a live show. ‘Dying For It’, for example, a mere one hundred and eighty five seconds of denim and leather clad sprinting rock could so easily be built up to twice that length with the addition of a good old fashioned foot on the monitor slice of guitar heroics without sounding in any way bloated, yet could be equally well received at its original length. There is a special skill not to get too hung up in one song and knowing when to keep things short and sweet (please take note current Iron Maiden; not every song needs half a dozen solos, okay?), and the band have clearly learnt that, the swagger of ‘Politic Devine’ cutting off almost without warning and blasting into the solid chugging of ‘Power of One’; I’ve no doubt having Corrosion of Conformity’s Mike Dean as producer helped, a man with a back catalogue that runs from the hard core to drawn out Southern Stoner and all in between.

Title track ‘Prophecies and Lies’ is pretty much built for stoners to get their chill on, combining fuzzed out guitars to the words of W B Yeats’ ‘The Second Coming’, a composition that could as easily have been lyrics by Geezer Butler in 1970 as much as they are actually a poem written in the aftermath of World War I. After this heavy trip, ‘Demon Eye’ clearly decided it was time to raise the spirits with closer ‘Morning’s Son’ where they get their Prog on with rocking guitar hooks expanding into a long, languorous musical exploration.

I can’t say with any authority what Demon Eye have been up to in the time since their last release; what I can say, however, is whatever it was, keep doing it, because ‘Prophecies and Lies’ is a right cracker of an album.