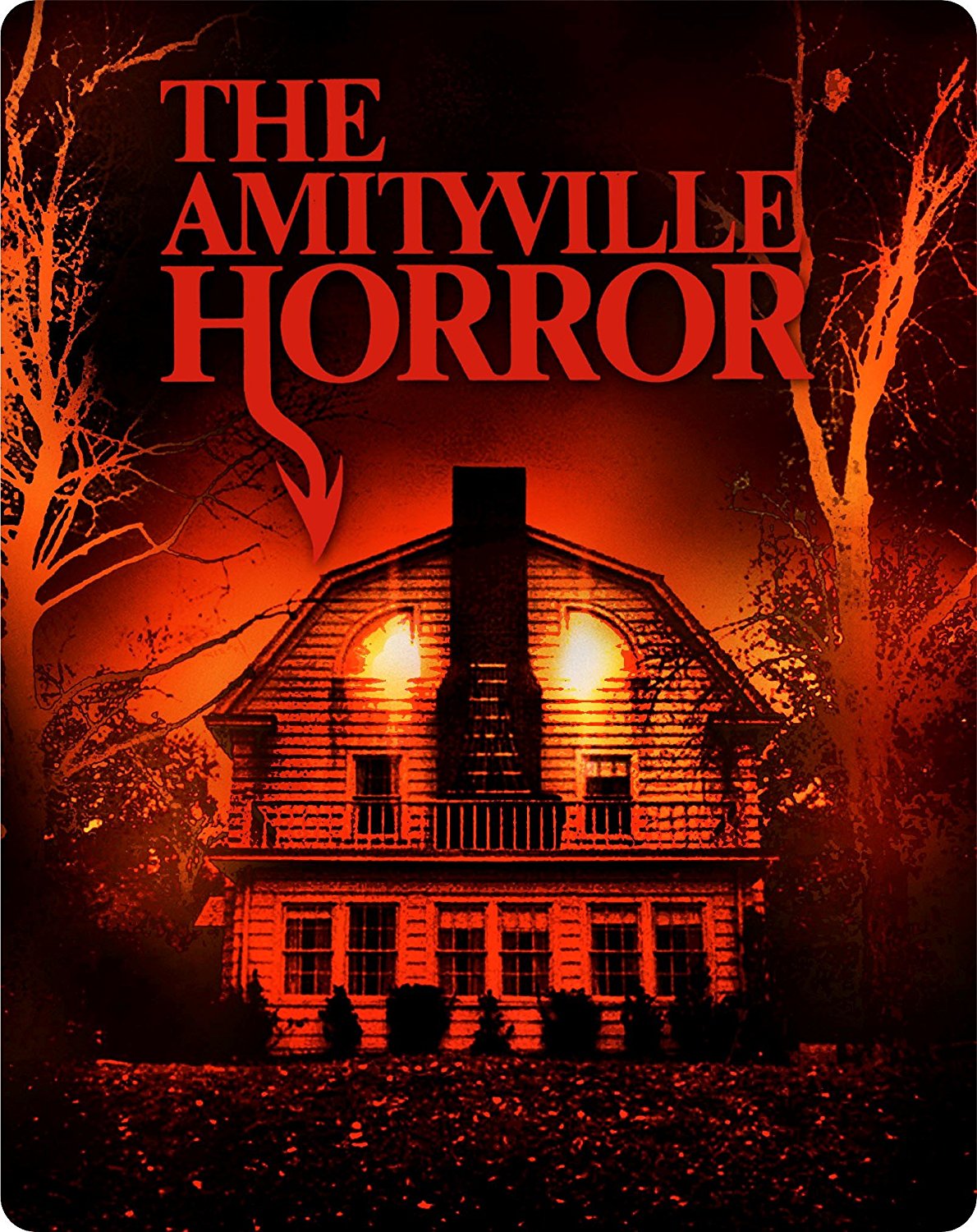 I guess if you went out Family Fortune’s style and asked the average person on the street to name a haunted house it wouldn’t be long before Amityville popped up. The name is embedded in popular culture, due firstly to the best-selling book written by Jay Anson and then the film which spawned a horde of sequels, remakes and run offs. I am not getting into the whole fact or fiction side of things yet but will no doubt be doing so when I get into the huge amount of extras packing out the UK Blu-Ray debut of the film via Second Sight, which is being released in a very attractive looking steelbox to boot.

Any thrill seekers should head (and it is still there) to 112 Ocean Avenue, Amityville New York which is the place bought by George and Kathy Lutz and the subject of the book and film. The two principle characters are played by a swarthy James Brolin and super-mum Margot Kidder who move in with dog and tribe of kids after shelling out a bargain price of $80,000 dollars for the property. One of the reasons that it is such a cheap price (apart from the fact this is the 70’s) is that there had been a shotgun massacre there by the son of a family prior to them moving in but this seems to be no huge concern. I am sure you possibly have a picture of the house in your head, it is several stories high and has two prominent looking windows that look a bit like eyes that could see into your very soul itself. Naturally it is haunted as hell itself too. Strange things start to happen, there is a bit of a fly problem (cue some great macro photography in close-up), the local priest attempting to bless this house (it’s Rod Steiger not Sid James) is given his marching orders and a family relative who happens to be a nun, visits and vomits. George starts acting very unhinged and it’s not long before that happens to the front door too, various windows, open, close and generally everything gets more than a little spooky. Then there is Jody and if you too saw this at an early age you won’t have forgotten Jody at all! Following on a couple of years after the book in 1979 this would appear to be the only horror film made by Rosenberg who is probably best known for Cool Hand Luke and Brubaker. The tension and feel of unease is palpably handled not due in least to the creepy musical nursery rhyme motifs of Lalo Schifrin. Things build up in a subtle way but the shocks are stylistically delivered with great jarring panache and I can attest they have stayed with me over the decades from when I first saw it. These are particularly pant soiling on the sound mix of this Blu-Ray presentation and the colour and clarity of image are perfect and a long way from the original Guild Video release whose cover I remember so fondly. Hollywood wasn’t hugely into the haunted house flick in the 70’s and there are not a large amount of them, other notable examples The Changeling (Peter Medak) and Ghost Story (John Irvin) just missing the boat at the beginning of the 80’s. What sticks out about The Amityville Horror is the lack of special effects and the basic presentation of the scares and in my mind that makes them all the more effective than all the bells and whistles that followed for the sub-genre with films such as Tobe Hooper’s Poltergeist in 82. As mentioned the success of the film led to sequel Amityville II: The Possession courtesy of Bullet For The General Italian director Damiano Damiani in 82 which is also well worth a look and then went down the sewer with rubbish like Amityville Dollhouse and other straight to video dreck. I guess the 2005 remake Andrew Douglas) with Melissa George and Ryan Reynolds is worth a look for comparison sake but for me it’s the original all the way. A bit of research reveals that the infatuation with all things Amityville has far from died down and coming this year is Amityville Resurrection with Jennifer Jason Leigh, considering what an OK job director Franck Khalfoun did with the remake of Maniac I’m curious but talk about flogging a dead ghost. … Let’s move onto those extras. First up and still looking great, James Brolin chats about getting in with Fox and his career taking off on films like Capricorn One. He was introduced to the book of The Amityville Horror in heat like we are getting here right now and being freaked out reading it and visiting the real house. He talks about getting into the role and the professionalism of director and others involved in the film He says that nothing strange happened on the shoot but with executive producer Samuel Z Arkoff on the case the publicity machine was on overload. Meeno Peluce played Matt Lutz junior at the tender age of 8 but was no stranger to horror after having just been in video nasty Don’t Go Near The Park (Lawrence D. Foldes). Although not finding making the movie scary, seeing it was another matter. Although he doesn’t remember the director, as you will hear he will never forget Margot Kidder. Sounds like he had a lot of fun, especially being able to do his own stunts and although not particularly active now, it paved the way for him to move on to many well-known TV series. Screenwriter Sandor Stern started out with episodic TV and Amityville was one of his 1st features. Meeting Jay Anson he questioned legitimacy of the “true story” to be told “I’m a writer I don’t have to believe it.” Apparently the original screenplay was not scary enough so it was up to Stern to turn it into a proper screamplay, which he addressed accordingly. Also of interest, the real Lutz’s contacted him keen on a sequel a couple of year later saying the evil had followed them, involved in other things though he passed; interesting. He went on to direct Amityville 4 The Evil Escapes himself in 1989, is an affirmed believer in the supernatural and claims to have encountered things going bump first-hand. Lalo Schifrin is the last of these interviewees the Argentinian composer has over 200 film compositions to his name and is still prolific right up to date at the age of 84. Going from be-bop to big band and jazz moving to film soundtrack proved no Mission Impossible for him and work on Dirty Harry movies made his day. The devil was definitely his muse on Amityville leading to what can only be described as a memorable and haunting score. Now comes the extra I was really interested in, a feature length documentary with Daniel Lutz, son of George and Kathy. There’s two sides to every story and whether everything was hoax is one line of thought here. Not according to Daniel who after running the gamut of what we see in the film and allegedly even worse, is in therapy with obvious signs of PTSD. There is absolutely no disputing the murders that happened before the Lutz’s moved in and circumstances are still more than suspicious. The “melting paranormal phenomena” which followed is also well documented. There’s certainly reasons for things having occurred but the fact it followed the family with no hauntings reported at the actual house after they left seems strange and to my mind more in lines with poltergeist phenomena rather than a haunting as such. There’s plenty of insight into the family here (although all from Daniel) and one thing that’s very clear is that he did not like his late father George in the slightest. There’s plenty of freaky stuff discussed here and not just by Daniel but others involved in reporting and investigating the original event. At one point a photo is shown which was taken with an unexplained demonic looking child in. Scanning it thinking “where” I suddenly saw it and it was a blood-chilling moment. There’s no definitive answers to be found here but this is a fascinating insight into perceived events, whether they actually took place or not. Being a believer in the supernatural or not is unlikely to make this any less of a chilling watch, even on the hottest of afternoons. Last feature ‘For God’s Sake Get Out’ is a shorter one basically with Brolin and Kidder reflecting on their memories and although we have heard some of Brolin’s already it is interesting to finally get Kidder’s insight on it all. Complete with intro and commentary track by parapsychologist and author of Murder In Amityville Dr Hans Holzer, trailer, TV and radio spots this lot will easily keep you up till 3.15AM and by then you’ll be too scared to go to bed. Needless to say this is well worth upgrading to or indeed watching for the first time. Don’t be surprised if you end up sleeping with the lights on though.