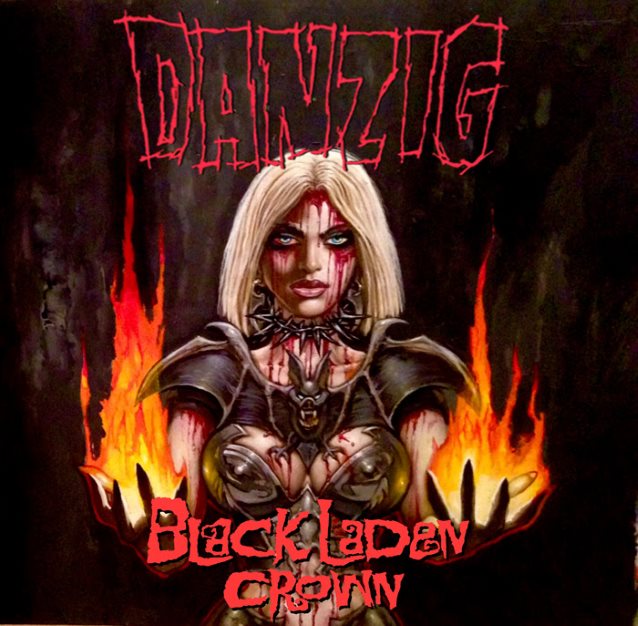 What I find rather amusing is that a couple weeks ago I went on a Misfits and Samhain binge and was trying to see how many music videos they had. Most are live clips with a very young and very skinny Glen before he filled out and formed Danzig. What hasn’t changed however is his black sense of humour or macabre storytelling. Or the good ol’ rock ‘n’ roll vibe he’s got going with the chunky guitar sound. Glenn Danzig pretty much plays everything on this album, including the occasional drum, while Johnny Kelly takes care of that instrument the rest of the time and Tommy Victor adds his guitar-manship to the mix for good measure.

Opening with the title track “Black Laden Crown” and its ultra-slow tempo tapped out on a high-hat and kick drum with accompanying guitar riff that is soon joined by Danzig’s unmistakeable voice as it winds its way along.

The squealing guitars “Eyes Ripping Fire” break into leads which slowly meander their way back into the main riff keeping the rhythm flowing as the bass rumble gives it a great backbone.

“Devil on Hwy 9” is rather up-tempo and probably going to be the first track most hear from this album. Kicking off with an immediate guitar lead until Danzig’s husky voice comes in, then coming back into the fray on each chorus.

The twinned guitars work impeccably well together on “Last Ride” with the drawn out lead carrying almost as much anguish as Danzig can put in his voice as it wails on.

The gentle picking on a steel stringed guitar with the nearly whispered vocals give “The Witching Hour” a hauntingly beautiful quality that is carried forward when the drums and distortion come in to slightly overpower the vocals which retain a certain softness about them even though they have raised in volume and cadence.

Starting nice and slow “But a Nightmare” builds to become one of the faster, heavier tracks on the album before fading into the much slower “Skulls and Daisies” as it trudges on into some vintage Danzig with “Blackness Falls”.

A far darker feel is used “Pull the Sun” giving it an Americana vibe that would not feel amiss on a noir crime movie set on a dark desert road. But oh, can that man sing and carry a tune with his Elvis-like bellowing.

I really enjoyed this nice reprieve from the far faster and heavier stuff I’ve been listening to of late and acknowledge that the moodier the music, the more emotively it affects you.