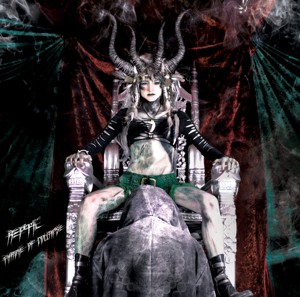 The freaks are out with this German act of self-described “individuals,” who are certainly that. They seem to be led by a dreadlocked messiah who describes them as being either the biggest joy or biggest disaster in his life. Videos are eye-catching as they cover themselves in oily substances and cavort around to harsh electro beats. Shock rock is the first thing that springs to mind encountering them but as the album, their debut unfolds one discovers they have plenty more substance about them and are far from one-dimensional.

As we descend into the ‘Anger Empire’ of their core, sounds clank and churn into a collage of industrialised beats and chunky rhythm. Vocals come in slithering about in a suitably reptilian fashion before harshly yelling out with anger and discontent into the strikingly aforementioned video track of ‘Reptoil Ink’ full of black blood and vomit. Think a mix of Marilyn Manson (especially with the cleaner vocal parts) Skinny Puppy, Das Ich and even recent Mortiis and be prepared to stomp your big black boots around a dance-floor as this one bounces you about. Choppy and churning as it beseeches you to “get back to the inner core” this is a strong opener with plenty of ballast about it. A musical box intro has ‘Monolith’ ranting in and there’s an unbridled anger about things here too, the clean vocals soar and hit the spot whilst an EBM fusion of sounds bleep and coral the musical synergy. These songs are good and energetic, although not immediate, you probably wouldn’t think of them as obvious singles or anything like that. They are just a bit too long and have no obvious catchy parts to identify them but in their favour these are no teeny playground swearathons for those looking for quick disposable tantrum music. Still the album has certainly got my attention and I expect it to carry on in a similar upbeat fashion throughout.

That’s not the case as we get into the middle section of the album though and the beats are dispersed for a much more soothing and self-reflective period as the throne does collapse in on itself. I kind of suspect that Mr Dreadlocks is pretty much behind both the majority of what we hear and the whole theme and narrative behind it all. It’s kind of like he has unleashed his inner Bowie here, songs are all sung in English and I have to wonder whether he is looking for a more widespread appeal than he might have got singing in native language. This is far from commercial though and is somewhat dour by nature. I have to admit on 1st listen I fell asleep during this part, spark out and only awakened after the end of the album. It kind of put me off getting back to it as well, one thing is certain all previously built up momentum is lost and the length of these parts does not help them in their slightest either as inner thoughts and feeling are expressed. Some backing female vocals and a slow brooding build-up helps at times but things have very definitely been sucked into a downward spiral. Despite good intentions with its message ‘One World One Nation’ is hardly expressed in a Laibach stomping fashion and has to be the slowest and most lethargic song I have heard in an age.

Thankfully things bounce back into action with the third part with the tribal drumming ballast of ‘Soulride’ being just the necessary tonic; although for me on that first listen it was already too late. Not bad though this is now I still am at odds with claims of individuality as musically this is hardly original and there is a serious sense of deja-vu about the album as a whole. Reptil’s debut is a mixed bag with some good ideas about it but I can hardly see this setting the world on fire.