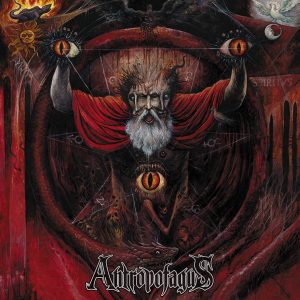 The first thing that came to mind after hearing a couple bars of an Antropofagus track on their website before deciding to review this album was Deicide, and while I still hear subtle hints of that every now and then when listening to the entire album, thankfully they are far from clones. To be fair even the final track has enough of their sound to make Malevolent Creation’s “Living In Fear” the Italian quartet’s own.

The instrumental intro “Whirlwind Of Initiation” very gently drops you into a manic maelstrom that is “Spawn Of Chaos” where Davide “Brutal Dave” Billia’s incessant blasting is roared over by Tya as Meatgrinder’s riffs are churned out at high speed.

Tya’s vocals are low and guttural on “Chants For Abyzou”, almost as bassy as Jacopo Rossi’s instrument of choice as he accompanies Meatgrinder.

As is to be expected from an extremely fast death metal band, their songs can be pretty brutal too and “Praise To A Hecatomb!” is just one such song, but it’s the eviscerating speed that the lead is played at that is even more impressive than the ferocity of the song.

The title track “Methods Of Resurrection Through Evisceration” has far more of a groove to it owing to the drawn out and slightly slower guitar riff that is blasted over relentlessly giving the song 2 distinct timing feels.

“Omnipotent Annihilation” is another rip roaring track that has a bit of a catchy lead to it as it twiddles along over the far heavier main riff before being drowned out by the ever present blasting.

By this point in the album Brutal Dave’s drumming starts to feel a little monotonous, but somehow on “The Abyss (Chapter 1)” he manages to throw in plenty of snare and cymbal hits that give the song a little more life and show he can be a dynamic drummer, unfortunately he quickly falls back into the swing of things with “Quintessence Of Suffering” with hyper fast, but precise blasting.

Unbelievably “Deception Of The Blood” takes things up a notch pace wise with the vocals and guitars vying to be the louder and more aggressive accompaniment to the battering of the drums.

As stated above they wrap things up with a rather decent version of “Living In Fear” that any Malevolent Creation fan would not feel hard done by for hearing.

All in all it’s all you’d want from a no holds barred death metal album, but it does lack a in the dynamic and melodious elements it more than makes up for in ferocity..