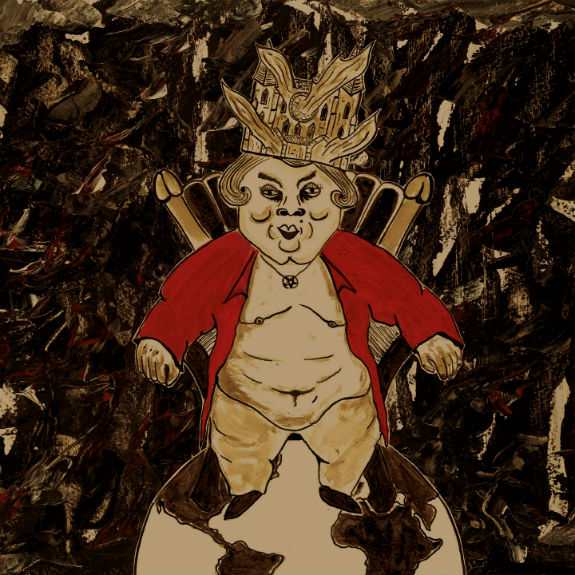 There’s more than a whiff of lunacy within the French extreme music scene. If you look at bands like Anorexia Nervosa, Carnival In Coal, Pensees Nocturnes & The CNK, just to name a few, they are all a sandwich short of a full picnic basket. Perhaps there’s something in the water, maybe they are all inseine (sorry, had to). Doctor Livingstone I presume (yeah again, couldn’t not) have possibly been drinking from the same source as obviously they are similarly afflicted. Proof is everywhere. They named their debut album as translated from French as ‘Our level is too high for you, miserable bipedal creatures for whom we have only contempt, can judge against our delicious creations’ and that’s just for starters. This is their fourth and my first encounter with them. The band have an illustrious and somewhat dubious pedigree, three of them have played live in Mutiilation and one Ad Hominum, they are also involved in Sektemtum and Verdun so have plenty of experience between them.

The album starts off with 16 minutes of slow bouncing drum beats and some ambient sounds; think Silvester Anfang on Valium. Yep, any not quite normal band would leave this as a hidden closing part to their album; not this lot, they start with it but there’s always a skip button. Completely at odds with this once the next hour gets underway we discover that although obviously mental, the band can certainly play and are bloody good with it. ‘Lux Delenda Est’ batters in as though the drummer has suddenly mainlined adrenaline and we are bounced all over the shop with rugged grooves and coarse shrieking vocals. I guess stylistically the main thrust of what we get through the 13 songs after THAT opener is a volatile and abrasive lesson in blackened hardcore. There’s loads going on under the scenes though and the vocals often illustrate an unhinged craziness behind them. This first track ends with what sounds like symphonic resistance music and trundling tanks before the next assault bangs in for instance! It’s black metal as far as the blasting is concerned but obviously from a band who like to mix things up a lot and experiment continuously, which is a very good thing considering the length of the album. At full speed they crush everything in their wake and hit speeds up there with the likes of precious snowflakes Nails but unlike them can actually write a song and have you know, staying power! It’s not all full speed ahead though, there are some slower doom like textures and even some ambient parts like at the end of ‘Give Them Tragedies’ with some nice mellow wind chime sounds provide breathing space after the full on rage before it.

What exactly the band are getting at narratively is a bit beyond me, it’s tricky to work out whether the vocals are in English, French or even Latin as they are screamed out. Song titles hardly give a clue either, the most interesting among them being ‘Fuck You With A View’ and ‘I’ll Have Some More Apple Pie Please!’ I can hardly comprehend what this lot would be like live or what level of drug taking by both band members and audience would be necessary to survive it. The impressive thing about the album is that in continues to keep up the incendiary levels and intensity and with that my interest throughout. It never goes through a sticky patch and simply keeps on delivering all the way. Passages hit with near grindcore violence and slap you round the face along with all manner of weirdness; is that really what sounds like a bunch of lunatics doing Native American war whoops as they take over the asylum?

This one sat on our review’s list for a few weeks whilst everyone politely ignored it no doubt hoping it would go away. Finally getting other deadlines out the way and determined to give it a listen I’m damn glad I did as this is my kind of zaniness through and through. Having played it (minus the 1st track for the most part) half a dozen times I’m still well and truly discovering different nuances every listen and doubt things will not stop jumping out at me for some time to come. You may not discover Stanley here but you will have a damn good time getting lost!