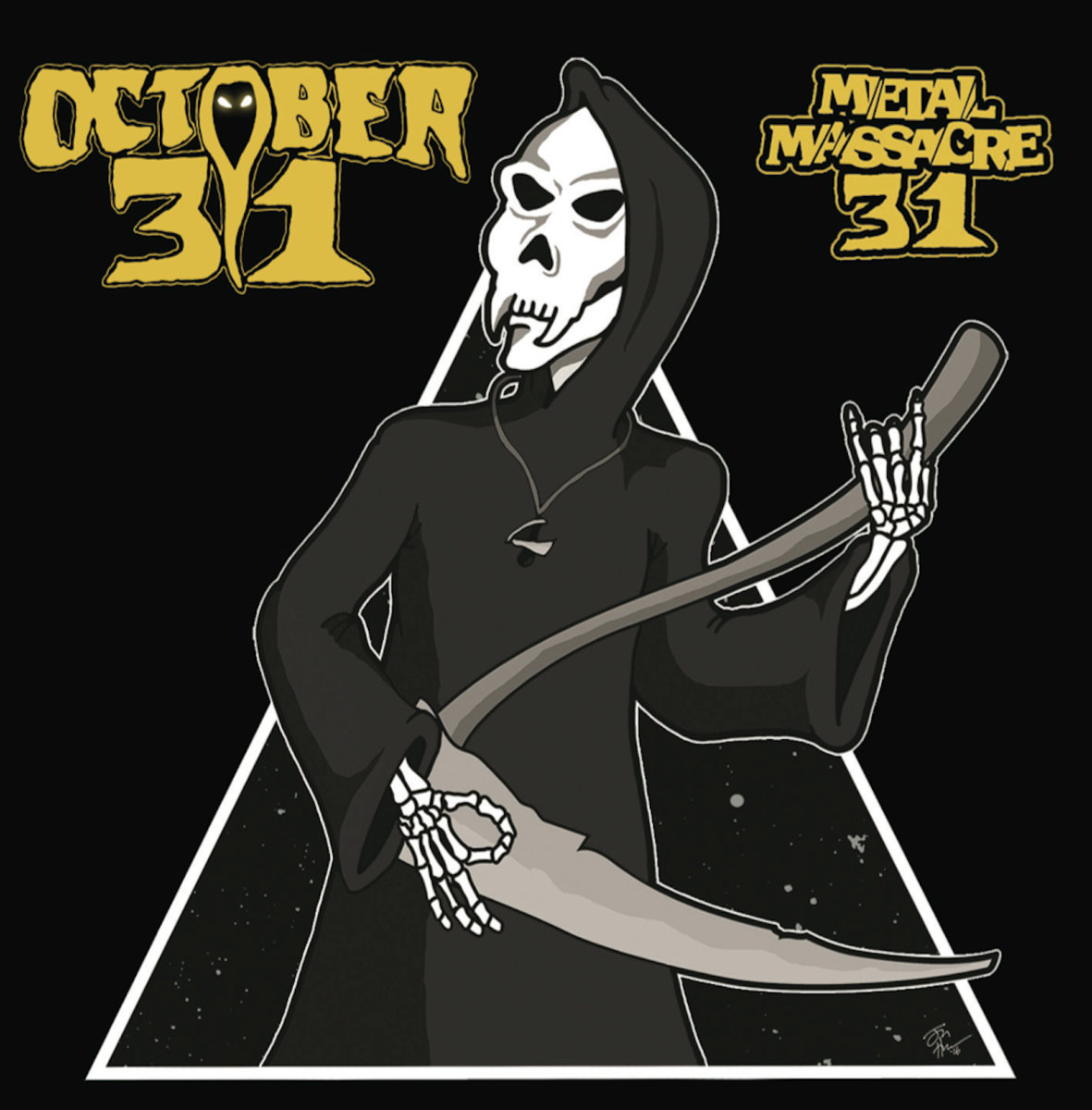 This latest offering from classic heavy metal fanatics October 31 is a slightly different affair to normal. Rather than being a new studio album with their own songs, the group have decided to pay tribute to the legendary heavy metal compilations known as Metal Massacre. This lovingly-crafted compilation of the band’s favourite songs from those albums is, in my view, a rip-roaring collection of tunes which show off some hidden gems from metal’s golden age.

Not to say that there aren’t great things happening in the world of heavy music now, of course there are; but the series of songs that October 31 have chosen to cover are just fantastic (in my humble opinion)!

The rough-around-the-edges, heavy, pounding production gives extra weight and power to the classic tunes, some of them are really bone-crunchingly heavy; especially when you compare them to some of the woefully under-produced originals. Tracks like `The Alien’ by Sacred Blade and `The Battle of Armageddon’ by Tyrant have been given a new lease of life in particular, with added weight, power and majesty.

I’ve always been a fan of King Fowley’s musical projects; there is a man who loves his metal. October 31 is no different with its love of all things classic and metal; NWOBHM in particular. This affectionate tribute is a labour of love, you can tell. The band play their hearts out on every song, and King Fowley put’s his heart and soul into the vocals. He roars, he gargles, he screams, yelps and occasionally even hits a note. King’s vocal style isn’t exactly what you’d call `singing’ but it is absolutely full of character and feeling; also if you listen to some of the original songs, he’s a done a very good job of imitating the vocal style.

I must confess to being a little too young to remember the original Metal Massacre compilations from Metal Blade, although their album covers are instantly recognisable. October 31 have covered some of the lesser known bands appearing on those albums; so for me it has been quite an interesting voyage of discovery.  In fact I listened to the album in the car without looking at the track listing, and the only band I guessed correctly was Omen – I vaguely recognised their speedy take on Iron Maiden, complete with catchy chorus and slightly cringe-worthy but amusing lyrics. All the others I had to look up, and now know a little more about some of these obscure underground acts; Tyrant, Titanic, Hallow’s Eve etc.

I have thoroughly enjoyed this collection of covers, more than I normally would do a collection of someone else’s songs. I’d still like to hear more new material from October 31, but in the meantime this encyclopaedia of obscure early 80’s metal, presented to you by raging enthusiasts, is a thoroughly entertaining stop-gap.