Mrome – Noetic Collision On The Roof Of Hell (S/R) 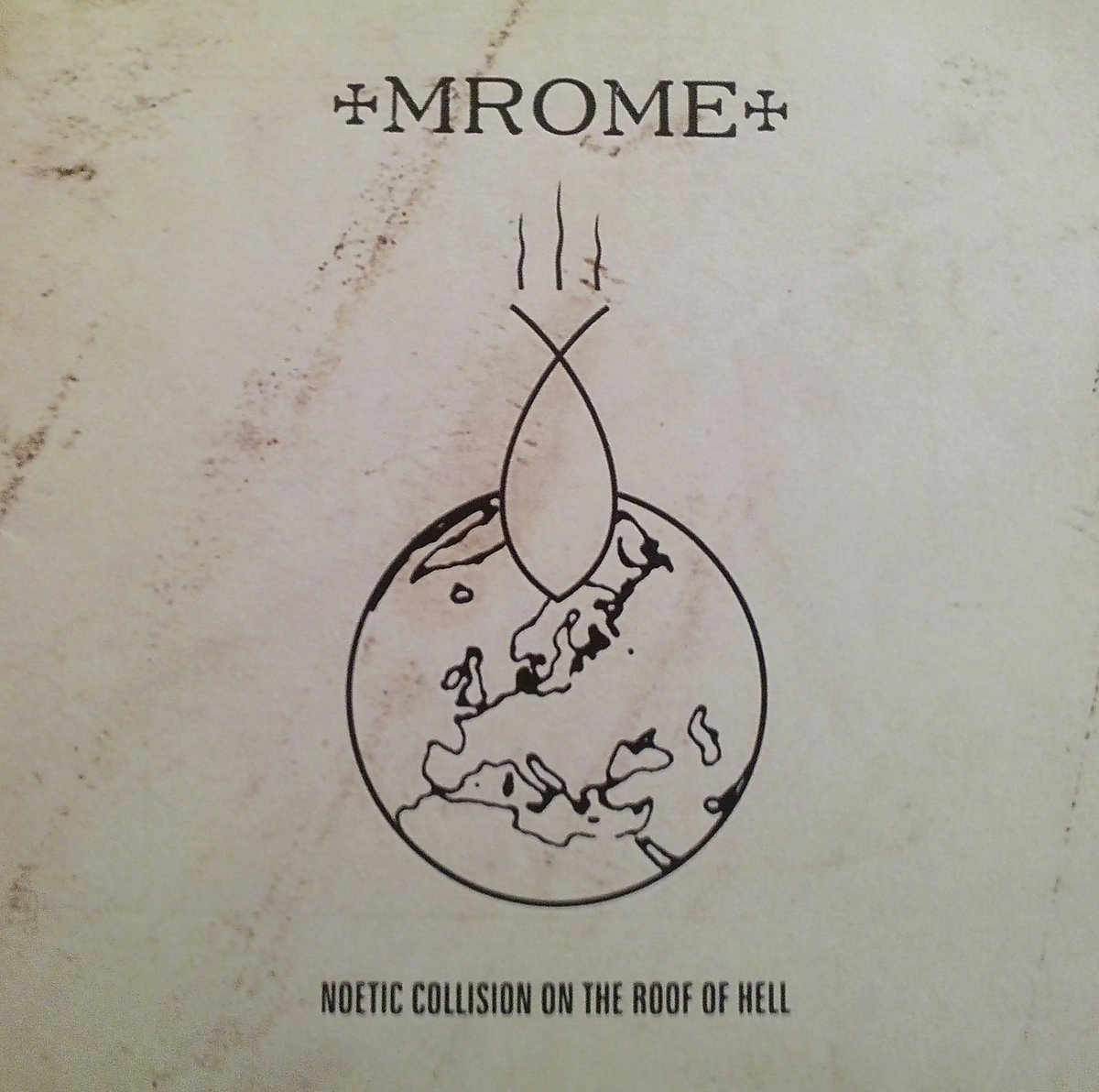 Apart from a Bandcamp page there is little in the way of Internet presence about this Polish group but a bit of digging shows that they were formerly known as Kingdom and existed between 1995 and 2002. They never got past the demo stage before splitting and after some time out guitarist and vocalist Key V went it alone under the new name of Mrome. This is essentially the first material recorded under that name by him and drummer P and apart from these facts and an obvious dislike of organised religion and no doubt most other expressions of conformity it’s just the music of these ten tracks that I really have to go on.

Mrome essentially keep things simple and it’s the groove fuelled guitar chug that drives most of their material and inject it with a mid-paced heft and furrow that really defines them along with the somewhat gnarly vocal approach. Growls are actually n English and songs like the opener ‘Colors’ are fairly quick to get under the skin. Pigeonholing the artist by genre is not quite so easy, groove metal it is not as there is a definite black edge to it that aligns the material with many other acts from the country. It doesn’t quite go into black n’roll territory but really hangs on the edges of it and at times I am reminded of more recent Satyricon by both instrumentation and vocals. There’s a jaunty and bouncy refrain around songs like ‘Crush The Moon’ which picks up the beat and jigs you around getting head nodding in appreciation after the 1st couple of listens. The chugging rhythmic thrusts prove impulsive and some of the underlying guitar parts add a sense of near mysticism as the duo star-gaze and reach for the celestial heavens. P really gets a slice of the action and rolls in with some weighty solo action on intro of ‘Migration Cult’ (take a note Lars this is how to make an impact and grab attention). Although it’s difficult to get any real semblance of where the act take musical inspiration from there is perhaps a clue in a cover of Danzig number ‘How The Gods Kill.’ Then again maybe not as unless I had read the fact it was a cover this would have probably been missed as Mrome make it very much sound their own and in line with the rest of the material here. It’s got a bit of a doom laden edge to it and the familiarity of the chorus must have registered somewhere in my subconscious as every time I hear it I can hardly help but join in and sing along. “Would you let it go,” well nope not easily once you’ve heard it.

As the album moves into the second half I just find myself bouncing around and grooving away to the solid riffing all the more as though a devilish spell has been cast over me. Strange song titles such as ‘Piss & Laugh’ make little sense in any language and make me all the more curious about just what the bands message is; maybe the bomb hurtling toward planet earth on the cover is the biggest clue though. Chaos death and destruction are certainly themes that crop up in songs such as ‘Magister Figurae Morte and as far as wrapping things up with ‘The Arsonist’ is concerned I get the distinct impression that Mrome’s world is one very much consumed by flames. Luckily musically it is one that has hit the mark with me “fire walk with us” indeed.

I get the feeling that that Mrome are probably as obscure as hell in Poland let alone over here in the UK. Hopefully whatever PR campaign that resulted in this disc finding its way to me will have some success as they are an outfit worthy of talking about and getting some recognition. Listen for yourself by hitting the link below.