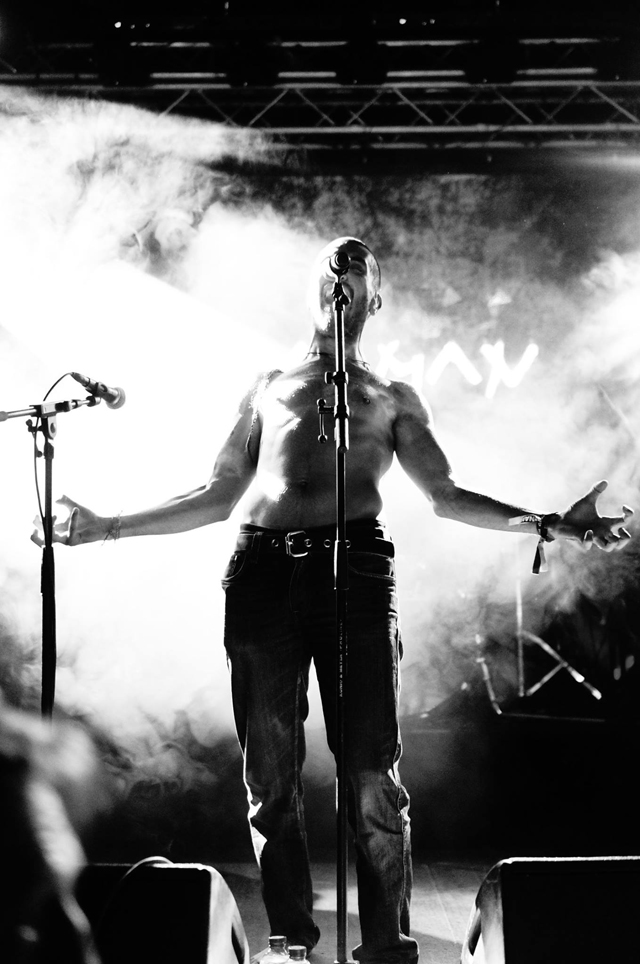 Smallman came from Bulgaria with the promise of mysterious music. So there we were at 1.30pm on Sunday afternoon, witnessing a very deep, dark and mystical sound with bagpipes and at other times a flute and a reed pipe. The singer, who played these assorted instruments, was himself mysterious. When singing in his haunting, wailing style, his hand movements were expressive as if projecting to a higher place. Between tracks, he kneeled down and even though I was at the front, I could not see what he was doing – praying, meditating or perhaps something more mundane like winding up the bagpipe or checking the set list. Whatever he was doing, it interrupted the flow and broke the spell, which the dark and bassy rhythm had been generating. It was absorbing but I wouldn’t say hypnotic. The heavy sound from the guitar and bass player and drums recalled a mystical Cult of Luna. The singer uttered gracious words of thanks and embarked upon a multi-coloured climactic final number. This was a strange and exotic mix. The hugely experienced Sadist came on stage. Fronted by a large bearded gentleman with small eyes, large ears and a Roman nose, they proceeded to tear the place up with their brand of old school death-thrash prog. There was the strange sight of a band member playing the keyboard and guitar at the same time – according to someone who had seen them before, he had been doing this for years. So too the bearded gentleman had apparently been putting his big arms around his guitar players. Lucky them. The music was tight and venomous. The screams were more Brutal Assault, where the Italians had played, than ProgPower. The thrashing metal was fine but I preferred it when Sadist got past the screams and played in a prog style. The riffs were impressive and the keyboards added value and atmosphere to each song, including the mighty “Attic and the World of Emotions”. “Scavenger and Thief” again had a strong rhythmic line. Old school it may have been, but there was plenty of variety and energy in the songs, and the consensus among those I spoke to was that Sadist had done a good job. I am no connoisseur of Klone myself but I was aware that they have a good reputation. Starting powerfully, they built up a melancholic but brilliantly moody atmosphere. The two guitarists and bassist threw themselves about the stage to the movements. The singer was more sedate, singing the songs classically, cleanly and in a soulful way. At first the combination of clean songs and thunderously dark prog rhythms didn’t work for me, but as the set went on, it worked itself out and each had their turn. These Frenchmen were good on “le look”. Their appearance was dark and they responded with suitable bodily gestures as they built up a head of steam. Sometimes it could be delightful and dreamy. At one point I was reminded of Porcupine Tree’s “Somewhere but Not Here”. Klone showed they were capable of hypnotic rhythms but never rammed them down our throat, instead creeping up on us. “Grim Dance” was mournful and powerful with post-metal progression. It proved to me that the singer’s voice works best with heavy instrumental melancholy. “Immaculate Desire” then moved along at a pleasing pace, then crunchy post-metal appeared out of nowhere. It seemed so natural. The vocalist told a story with each song and was constantly raising the bar. The elements were coming together now. Languid and melancholic atmospheres could be uplifting. Light, dark and alienation captured the brilliantly soft “Nebulous”. But the real strength and delight for the audience lay in the band’s co-ordination. “Slowly inside … there’s no place to hide”. This was becoming a mystical experience. At once, Klone’s performance was atmospheric and misty, hard-edged and melancholic with the instrumentals now in total harmony with the vocals. To finish, “Army of Me”, a cover of a Björk song, was given the Klone treatment. Sung with clarity and expression, it was thunderously heavy and memorable. Bravo, Klone. Now for something completely different. Nordic Giants comprised two men in weird headgear, facing each other. One played the drums and guitar using a bow. The other managed the samples and played the occasional trumpet. But we could hardly see them. It was dark and two large screens dominated the stage. We received presentations of short fantasy-based films and cartoons. No PowerPoint, I’m pleased to say. I’d been led to expect something provocative depicting blood, war, death, horror, fear and other everyday kind of stuff, so this was no surprise. Now as a lifelong supporter of Grimsby Town FC, I’m accustomed to suffering 90 minute displays of ghastly horror. This lasted a mere 75 minutes. Dark electro ambience and manic drumming was the musical framework. Basically a darkened version of Robert Miles, we were held captive to a soundtrack of disturbing images, and surreal and cosmic scenes. Perhaps this is all best left to film critics. As one who prefers gritty reality, this did nothing for me. I’d rather watch Grimsby. I made the comment to a fellow concert goer from Sweden that “Machina Viva”, the latest album by Wolverine, was rather depressing. “It’s depressing, but in a beautiful way”, was his response, before adding “after listening to it you will feel cleansed”. The band came quietly onto the stage and immediately I was bewitched. “Tonight I’ll be by my window, looking at the people below, so many stories of sorrow”. Oh my god. The imagery is so vivid and life-like. For that reason it sent a shiver down my spine. Stefan Zell delivers this gently. He shares his innermost thoughts as if we are with him having a conversation and he is telling us his innermost thoughts. It is so personal. The familiar tones of “Communication Lost” struck up. It’s not just the words and the lyrics but the magical instrumentals, which capture perfectly the mood of sadness. It’s all so powerful. The bassist’s gentle stroking coupled with his serious and almost tortured face, contrasting with the serenity of the guitarist and expressiveness of the singer, conveyed a range of human emotions. Of course they don’t manufacture this array of expressions, but they do form a mirror of humanity. The mood is always of resignation and regret.  As Wolverine’s own lyric goes, it seems there’s no way out of this. We as spectators are wrapped up in these reflections. After “Carousel” came “Pulse”. Stefan explained his devastating personal story, which lay behind this song. The drum is like a heartbeat. There’s no doubting the tragedy but there is strength as the instrumental section take us above the sadness and hauntingly create an upbeat mood. “New Best Friends” captures a feeling of helplessness, while the slow “Pile of Ash” is as miserable as can be. Stefan and the band all the while maintain their connection with the audience. The set, which comprised a balanced mix of songs from the “Cold Light of Monday” (2003) album to this year’s “Machina Viva”, needed to be cranked up before we drowned in a sea of gloom, and this duly happened with “Your Favourite War” and “This Cold Heart of Mine”. Both contain those devastating and chilling images, most notably “I want to ease your pain, but you turn your head away” but instead of being left lingering with this isolation, Wolverine’s serene instrumentalists again enter our soul with a sublime solo and even a metallic assault. But it’s controlled of course and we’re left to ponder and share Stefan’s final tale of trying to pick up the pieces as he embarks upon the gloomy “Nemesis”. Once again, the band’s gentle touch hooks us in. At this point I have to take issue with Stefan who described “Nemesis” as “pretty catchy”. It is a strong emotional prog song but not in the least catchy. As I reflected on this latest stellar performance from the band, I realised that my friend was right. Thanks to the band’s delicate touches, sublime co-ordination and tangible lyrics, there is sheer beauty in this world of gloom, isolation and lost opportunity. I cannot in all honesty say that I felt cleansed though. I guess I just need another dose of Wolverine. Threshold are always a safe bet. This said, we shouldn’t take them for granted. Once again, the Brits brought the place alive, and did it from the first second as they launched into “Slipstream”. Dynamic Damian Wilson has a huge personality, but as with any good band, this is about much more than the vocalist. “I think I know everyone here”, exclaimed Damian. This was probably about right as he had already been circulating amongst the crowd since the morning. And so it continued. There is a bit of a formula with Threshold but it’s done so well that it’s a joy: Damian leads in, then gives way to the dazzling guitar players, leaving him the opportunity to jump into the crowd and be with his adoring public, before returning for the grand finale. The fact is that the songs are so upbeat, and it’s impossible not to be carried away in the euphoria. The crowd clapped and bounced and responded in kind to Damian’s warmth and bonhomie. What’s remarkable is that irrespective of the album, Threshold seem to make songwriting seem so simple. It’s prog but not in an obscure way. It’s fluid and melodic rock and roll with pulverising drumming, seemingly effortless guitar virtuosity, nice keyboards and personality-packed vocals. All the songs are pleasing to the ear. Then came my favourite of all: “Pilot in the Sky of Dreams”. This is the most anthemic of all Threshold’s anthemic songs. It’s, as Damian vividly explained, “for those who caught the train home early”. I thought of Mikko Laine, the Sole Remedy guitarist who died at this event in 2011, and of our good friend Gary Porteous, who before his untimely death this year used to come to ProgPower all the way from New Zealand. RIP, guys. Damian built up the excitement by dividing the room, giving him a route up the middle for his umpteenth sortie into the crowd. “Pilot” was the highlight for me, and I’d have been happy if the set had ended there, but we still had “The Box”, “Watchtower on the Moon” and “Ashes” to enjoy. The song structures were the same but you can’t beat such anthemically catchy and epic live prog songs for entertainment. We flew, free to dream again as the lyric goes. Wonderfully sung, wonderfully acted, wonderfully played. More euphoria. Enough said. Year after year, Rene and his crew pull off a festival that is more spectacular the year before. For me, ProgPower Europe is just the ultimate event.