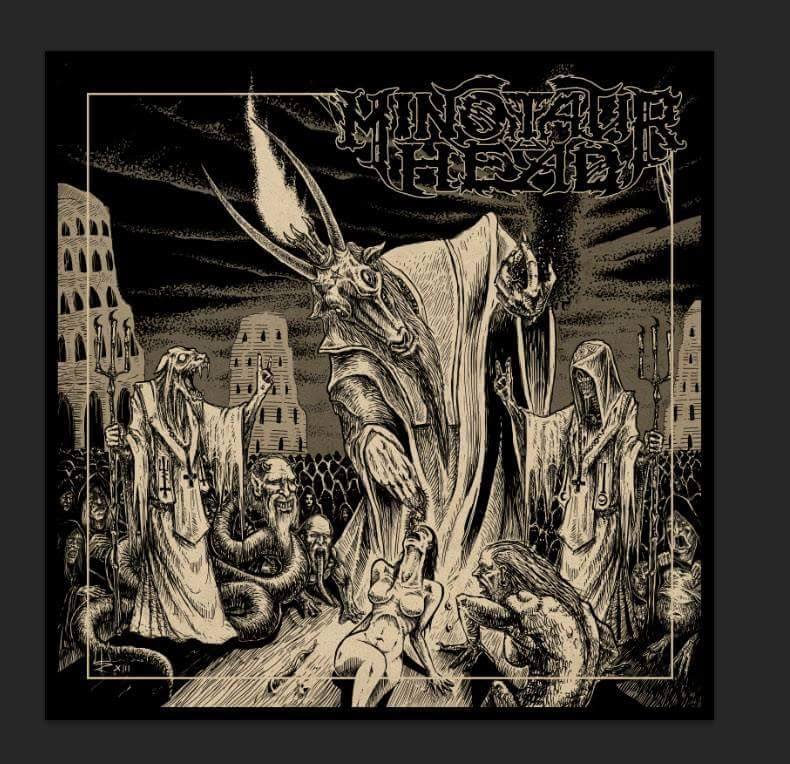 This slab of grimness is the debut album of pan-European supergroup Minotaur Head; containing members of various Swedish and Dutch underground extreme metal bands, that any extreme metal fan worth his or her salt will have heard of: Hail Of Bullets, Asphyx, and God Macabre to name just a few. As a result, this collection of truly morbid tunes has a classic quality that you don’t often get with debut albums.

The music itself is about as dark and grisly as it is possible to get (in my humble opinion). To describe this as Doom/Death doesn’t really do it justice; it’s skull-splittingly heavy, raw and primitive. It drips with a dark, malevolent, unholy atmosphere which few bands can create convincingly. On paper, a mix between the slow, blues-influenced riffs of Black Sabbath, and snarling death metal roars always left me cold; I remember a handful bands trying this kind of thing in the 90’s with little real success, musically at least. Minotaur Head have actually mastered this kind of blend; the riffs are incredibly weighty, with a primitive, moribund groove to them, and complimented by Rogga’s earth-shattering roar over the top conjure up incredibly bleak, desolate feelings, and grim, monochrome landscapes.

In fact, this is the first album of this kind I’ve heard that really hits the spot for me. The formula and the song writing is relatively simple, and mostly quite hypnotically repetitive, but there is something about the overall sound which is incredibly atmospheric and evocative. The band also throw in some fantastic, short guitar solos in there, which really brings home the atmosphere.

At 38 minutes, this album is also the perfect length; as the songs are quite simple, a long album could eventually become background music. These guys know not to overstay their welcome; the same principal applies to the songwriting itself. Just when you think the riff is going to repeat throughout the whole song, you’re suddenly hit with a fantastic burst of guitar soloing, or an even more morbid riff than the last.

I could wax lyrical about each song on the album, but instead I will just say that I couldn’t detect even a whiff of filler. Each song stands up on its own as a massive, crushing monument to the darkness, and each has a collection of killer riffs, brooding and desolate atmospheres, and an unholy groove. I originally downloaded this album onto my phone, which did it no justice at all. It is only when I sat with headphones, did I fully realise the magnitude of the music.

For those of you who remember the truly cult band Winter and their ilk, this is for you;  a gut-wrenching mix of Celtic Frost, Black Sabbath and Asphyx to get you in the mood as the nights get darker, colder and longer.