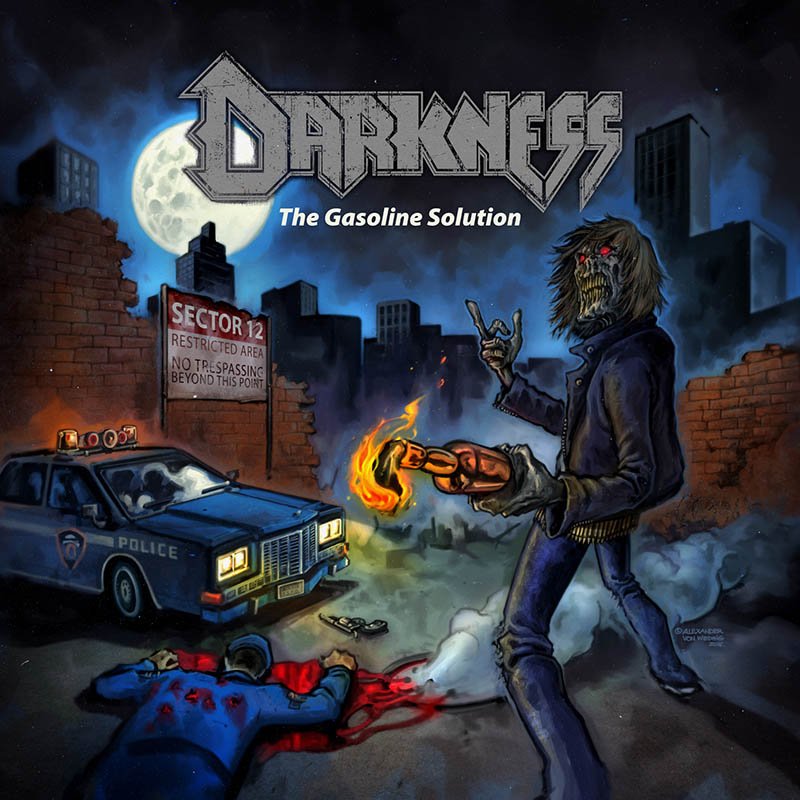 About 30 years ago Germany’s Darkness released a trio of very good thrash albums starting in 1987 with “Death Squad” followed by “Defenders Of Justice” and “Conclusion & Revival” in 1988 and 1989 respectively that were part of the second wave of German thrash bands following the pioneering releases of the first wave namely from Kreator, Sodom, Destruction and Tankard to a certain degree. Lacky (drummer) is the only original member from the very early demo days but Arnd can be thought of as an original member joining the band in 1987.

Albums by reformed 80s thrash outfits have been fairly hit and miss over the last half a decade or so as this fourth album has retained the cartoon styled cover art that was present on the other albums. Also the band has a lot to live up to as the new albums by compatriots Exumer and Accu§er are absolutely brilliant. Beginning with an intro is nothing new but I did like the ‘half a pound of tuppeny rice’ intro piece (yep I sang the words to it too) which ends with a gun being cocked as a brutalising riff shoots out. As expected the album has a formidable production with the guitars having a razoring tone. The vocals are typical of German thrash, not clean but harnessing a coarse but decipherable tone that suits the music extremely well. This is an album of contrasts as “Another Reich” continues after the opener with a lengthy drum fill piece and chunky riff and much slower pace. The riff is catchy possessing good pace dynamics enabling those neck muscles to flex as the tune steadily builds with an influx of lead ready for the riff break which is great and sends the tempo skywards.

A vicious riff starts “Freedom On Parole” before settling into neck snapping mode with gang chanted choral breaks which are clichéd but it works. “L.A.W.” was present on the EP “XXIX” released during 2015 but has had the intro to it removed. The pace is frenetic with the snare beat being remorseless until the pace shifts momentarily to a double kick. This album is a riffing bonanza, with each track hurtling along as “Pay A Man” is utterly punishing but very catchy with it. The title track begins with a shouted slogan chant before the tune develops a very Slayer like riff complete with mid-tempo head smasher speed completed with a fine lead break. “Dressed In Red” has yet another exceptional riff as the pace is detonated upwards leaving the album to close with the longer “This Bullet’s For You”. In archetypal thrash fashion it starts with an acoustic piece that has a lingering guitar effect added plus some spoken words. The tune sequentially builds adding layers to the acoustic foundation but keeping the pace fairly unhurried until the drum fills signal a ratcheting up in the velocity and firmly showing that Darkness has arrived in 2016 like the proverbial bomb going off. Excellent thrash metal that stays true to the genre’s origins making it an essential purchase for all thrash fans.