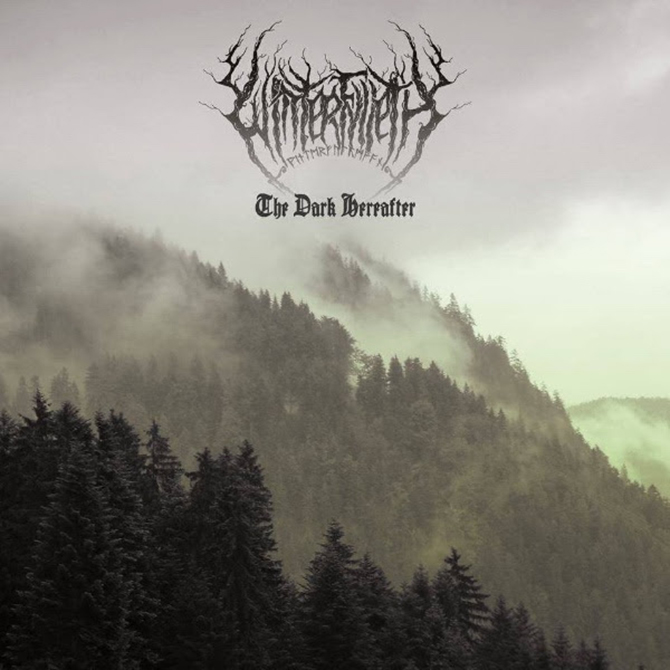 I was checking and noticed that it has been almost exactly two years since the last studio release from Winterfylleth; the landmark ‘The Divination Of Antiquity’ album. It doesn’t seem that long because of the stature of that work and also because I still play it a lot. Which of course means I was filled with anticipation for this, but also trepidation as is always the case when a band follows up such a milestone.

I should have more faith. Winterfylleth, it appears, have reached that place where they don’t do bad albums. Albums that intrigue, question and make you think, yes. But not bad albums.

The Dark Hereafter, I think, finds the band in a more focused mood than before. Somehow it just feels more concise to me. I’m not just talking about length (this is forty minutes, a good length), but emotion, language, touch, a particular line of lyrical concern (but alas no lyrics with the review copy.) If The Divination Of Antiquity had a sense of travel and exploration, both through ages and place, The Dark Hereafter seems to stare deep into the here and now and the possibilities good and bad held within it. It’s almost like that little branching path you walk past in a forest day after day until the moment you stop and wonder “What is along there. What if just this once I follow it…? ”

The title track opens up this contemplation: A burst of Winterfylleth in their harsher mood. Intrinsic melody yes but a cold, short blast. I hate reading too much into song titles when I have seen little written from the band themselves but there is a sense of uncertainty about it, a pessimistic vision of what may be coming towards us all. From then we walk the longer, more isolated ‘Pariah’s Path’ which was a bonus track on the digipak version of their previous album but which finds its home here. It is one of their finest moments of contemplation and is a sure footed pathway into the album. ‘Ensigns Of Victory’ following is a curiously ominous affair, one where a melody reminiscent of some classical, national fanfare drifts into a more downtuned and uncertain tone. Unrest in the world, maybe. Sabres rattle and scoundrels find their last refuge behind flags of convenience.

Then comes the truly epic ‘Green Cathedral’. A gathering of foliage above our heads, a discovery of a calm spirituality within the natural world and within ourselves that can offer more and far outshines the manufactured religions of mankind. Pastoral, beautiful, flowing like breeze stirred leaves it envelopes us. Peaceful but always strong it stills the turbulent uncertainty of the previous songs and offers a prospect of peace in isolation. Hope maybe.

They close with ‘Led Astray In The Forest Dark’. For you non-Norwegian speakers (OK, yes, me very much included) this is a full bodied and English language cover of the Ulver song ‘I Troldskog Faren Vild’ from Bergtatt. With vocals ringing clear, choral and superbly done and the original melody carried on striking guitar lines too, this is an echo of the previous song but from another land, whispering that the natural world is there for us all if we simply walk into it’s arms. Led astray, but gently. A very respectful cover still with the Winterfylleth flavour.

The Dark Hereafter is a band at ease with itself but not perhaps with the world. It is not as expansive as ‘The Divination… ‘ but it is every bit as thoughtful and beautifully crafted. If you are new to them then this is an excellent album to start your exploration. If you are with them already then they have not let you down.