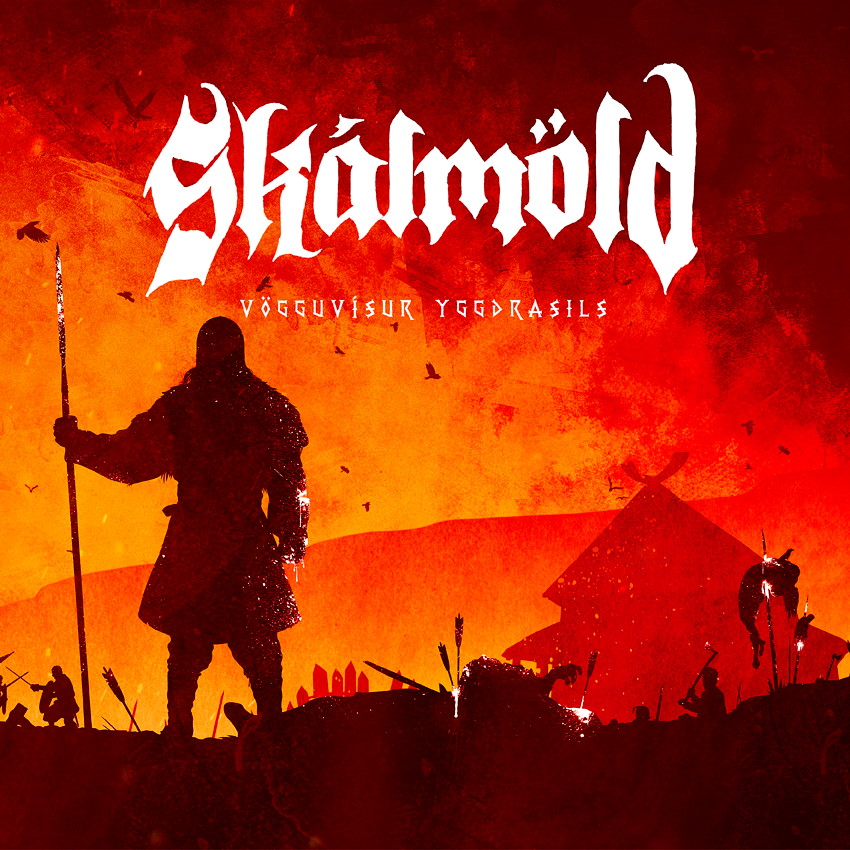 Having just submitted a review of the fantastic Midgardsblot festival, I was asked whether I would like to continue my “Viking adventure” by giving a listen to Skálmöld’s new release ‘Vögguvísur Yggdrasils’. Of course, I jumped at the chance.

Hailing from Iceland, it is no surprise that Skálmöld are heavily influenced by their Nordic roots with their lyrics written in Icelandic as far as I can tell (and “under the strict rules of the ancient Icelandic poetry” according to their website), all set to solid Viking metal. There has been a huge explosion in this genre of late, with the boundaries being pushed. Skálmöld are not as flamboyant as some, nor do they feel the need to submit to trends. Instead, they stick to their guns and deliver no nonsense Viking metal with a due sense of respect to their heritage and it is clear they are ‘the real deal’.

‘Muspell’ (the realm of fire) gets things going with its hypnotic rhythm, and harsh growls juxtaposed with clean vocals and great guitar work. The realm of ice follows (‘Niflheimur’) with more mid tempo rhythms and haunting vocal melody lines.

Current single, ‘Nidavellir’ delivers a more upbeat, melodic feel, painting a picture of the home of the Dwarves before ‘Midgardur’ takes over with a more sombre atmosphere. We continue our journey through the nine worlds via ‘Utgard’ to ‘Alfheimur’, the home of the Light Elves. For this majestic tale, the pace slows further bordering on a ballad at times, and this is one of the album’s highlights to my ears. I am looking forward to experiencing this track live at some point. Normal service is resumed on ‘Asgardur’ (home of the Æsir gods) with some particularly noteworthy musicianship on display.

The heaviest track of the album ‘Helheimur’ takes us on a journey to the underworld, the world of Hel, the goddess of death, where those beyond redemption ultimately end up. The pace slows, but the intensity is retained for ‘Vanaheimur’ the closing track.

Throughout this album, harsh vocals nestle comfortably alongside clean vocals, sitting atop memorable mid tempo melodies, telling tales of Nordic folklore. No it doesn’t have the ‘party’ feel or joviality which blights so much of today’s ‘Viking metal’, and in avoiding these clichés Skálmöld have done themselves a favour. This album feels authentic, and it grows with easy listen rather than simply being ‘disposable’.

This is well worth a listen, and your undivided attention while doing so.