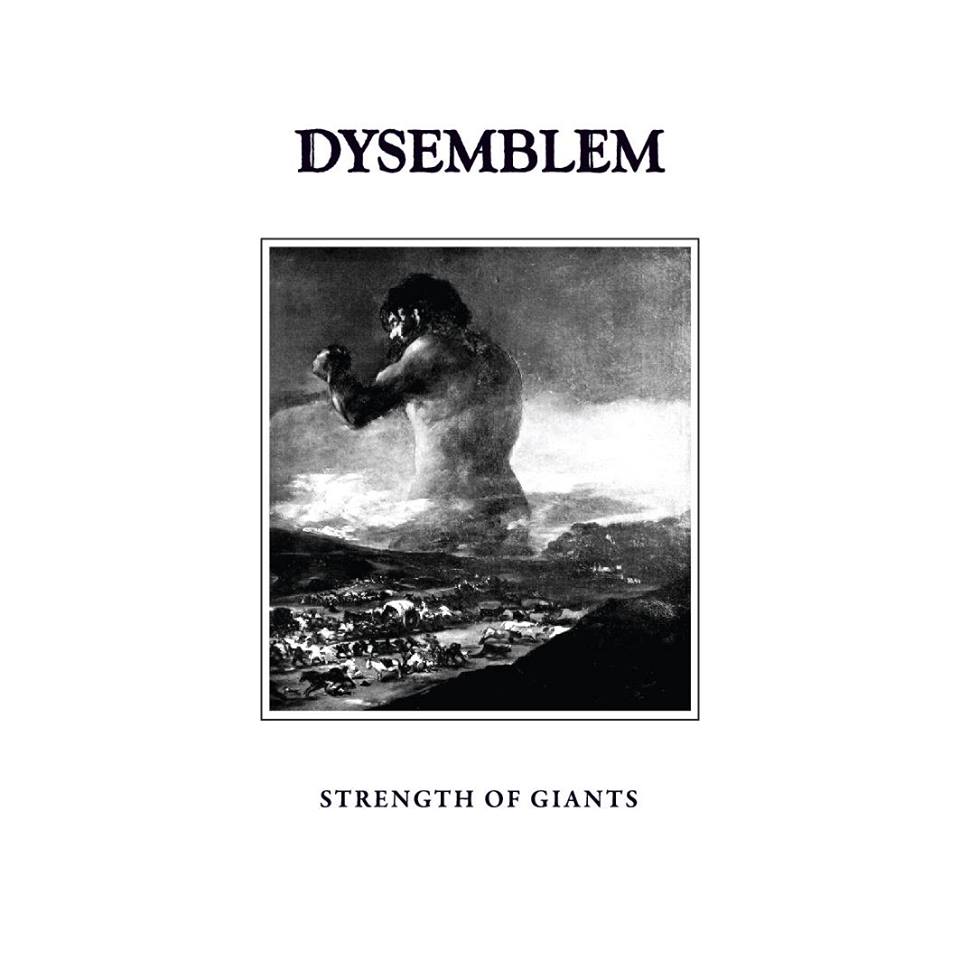 Worshipping the old ways and apparently having been in the metal scene for over 20 years Aees is originally from Greece but resides in London. Dysemblem may well be a new name for you, as it was for me and this is the debut album that sees Aees teaming up with drummer Nuctemeron after building things up over several demos and time served in bands such as Injekting Khaos, Embrace Of Thorns and Burial Hordes. What we have here are 9 tracks forged on a template of old school death and doom and running at just over the half hour length. One quick play found me going back to this several times, drawn into a solid and uncompromising stance that pretty much ticked all the right boxes.

Crunching and roaring in without any need of surplus intro this has a thick and vicious production to it that has you head-banging all the way ‘Down The Chasm’ as it ruggedly hones in. Drums clatter and crunch, guitars jaggedly scythe, bass tones are nice and deep and the vocals, well they are gruff and commanding. It sounds like we are at war and this is a battle that’s going to be a bloody one. Things slow and in comes the doom, bells toll ominously and this broods like a dark black cloud waiting to open up and bring on the storm. It saves it for a while though and some strange skewed guitar tones take into ‘Aphrodite’s Child’ perhaps in salute to the 666 hit-makers and following paths explored by Christian Death and Rotting Christ. The track certainly has some real identity with that guitar line repeating and playing with you as the drums surge, tremble and quake with vocals furiously barking over the top. Galloping strongly in ‘Gourd Of The Damned’ is a punishing fist-shaking exercise in might and I can clearly see why Aees cites bands such as Bolt Thrower, Autopsy and Blasphemy as some of his inspirations. This one kicks up a hateful vibe and is death incarnate as it swaggers and cuts a bloody path through its enemies. By comparison ‘Gloria Victis’ brings the “DOOM” literally as it crawls with stealth and the very word is gurgled out. It’s no less deadly though and the message is loud and clear with bloodthirsty rasps and an ultimate declaration of “More Gods No Masters” making intentions more than clear.

The pace and elements of both the doom and death end are well balanced ‘Hypnopomic’ is full on death going straight for the throat and shaking and tearing chunks out for a short obliterating 75 second burst. ‘Dysemblum’ resides beside it as a groovy but downbeat, slower doom-like instrumental sermon and there are lots of counterbalanced ups and downs here to give you plenty of depth and emotion. After plodding through the leaden flamenco riffing ‘Cold Light Of Justice’ and a final rampage that is ‘Death Is Not’ I doubt it’s going to be long before I’m drawn back to give this another spin. With the strength and conviction of the material on this debut I hope that thoughts are given as far as getting some live activity on the go. There’s certainly no shortage of shows in London where Dysemblem are likely to fit in very well.