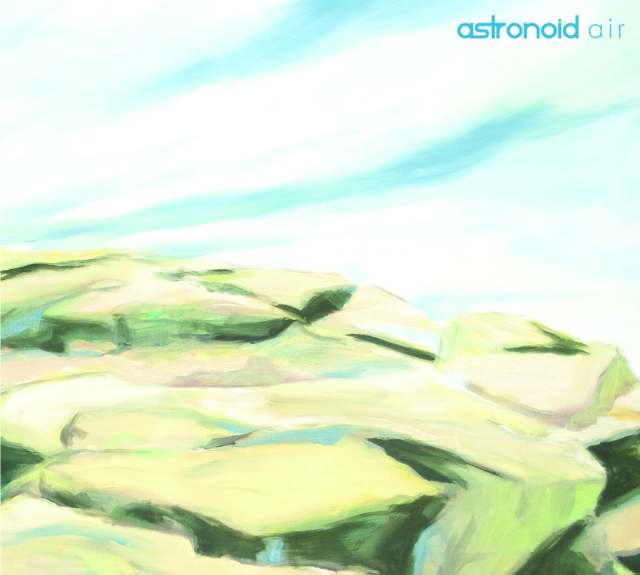 This is the first full length album of self-proclaimed dream thrash-shoegaze metal from Astronoid out of the USA and follows two previously released EP’s. Thrash and shoegaze sound like an interesting combination. The band explain this away by referring to aggression and pop structures, and quoting such diverse influences as Cynic, Enslaved and Emperor. Having listened to “Air”, I am at a loss to understand where Enslaved and Emperor come into this but what counts is what is in this album, not what isn’t.

Sticking to the aeronautical theme of the title, the rather pleasant and indeed dreamy opener “Incandescent” has the smoothest of smooth takeoffs. “Up and Atom” seems to be more what Astronoid are about. The “aggression” seems to amount to fast power metal which is supplemented with a high and dreamy vocal line. The power metal transforms briefly to a black metal style as “Resin” gets under way but softens up instrumentally and features another of those airy vocal sections. The fast melody drives this song along and the mix thickens up towards the end without going anywhere. The slow and watery “Violence” belies the suggestion of its title. The start of “Homesick” suggests dramatic strength but whilst the musical power remains, it is watered down by the plaintive vocals, resulting in a sickly and anodyne song. There’s so much that could have been done with these instrumentals. Watering them down would not have been my choice. The rapid-fire drums have that faint suggestion of aggression but it just doesn’t seem to be in Astronoid’s make-up to sustain them, so why bother? It’s not a crime to be placid or exciting or crowd-pleasing. As a lyric “Sunshine’s on my face” hardly goes with the darker side of life, so rather than blurring boundaries for no obvious reason, I was coming to the conclusion that Astronoid would be better off moving into expansive rock or even power metal. They seem to be in too much of a hurry, and track after track “Tin Foil Hats” from which the above lyric comes just end in the middle of nowhere. The title track “Air” does have more punch than most, but it occurred to me that the vocals by now had become mundane by virtue of having the same tempo and mix. If good sound effects were ever needed as an enhancement, it was here. I read a comparison between Astronoid and Alcest, which I can see in terms of the vocals but not atmosphere, and here Astronoid can learn a lesson from the Frenchmen in how to use haunting vocals to good atmospheric effect. On “Obsolete” there is a fleeting attempt to introduce some interest in the vocals. The standard vocal fare seems to be out of place, sitting in the middle of a technical power classic metal number. The disjointedness is present right through to the final track “Trail of Sulfur”, which to its credit reaches rare epic heights towards the end. I think if I’d listened to this album without vocals, it would have been more inspiring, but only as something to build on, as for me the patterns are essentially of the same mould and energy, and need sonic expansion and depth.

End product is more important than definition. Astronoid are on a number of different wavelengths here on “Air”. I can’t say that I was on many of them. My principal reservation with “Air” however is not that I don’t particularly like it, but the fact that it is mixed up in an uncoordinated and schizophrenic way. It’s as if the varying styles alone were considered enough to give this album character. Listeners need to be surprised and delighted by subtleties and connections. These qualities are lacking on “Air”.