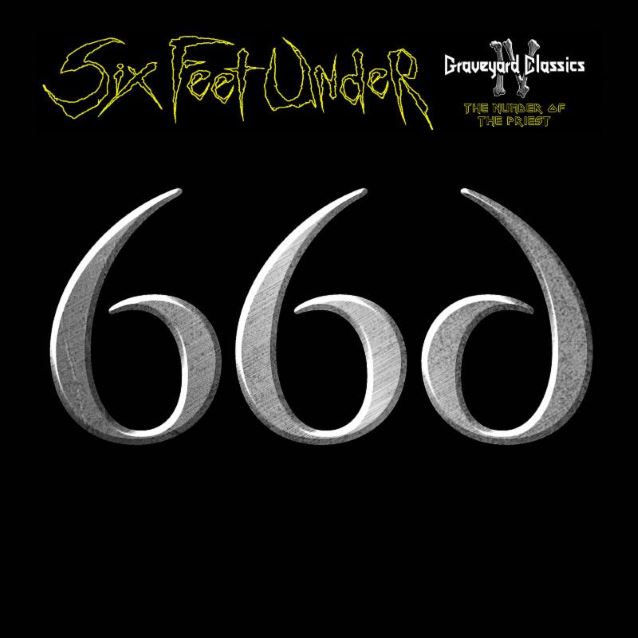 Now under normal circumstances I quite like Six Feet Under. Chris Barnes & his hired hands have produced some pretty decent groove based death metal tunes in their twenty one year history since their debut album ‘Haunted’ BUT what is with these ‘Graveyard Classics’ cover albums they keep putting out??? This is the FOURTH one for fucks sake!

Ok…. Now I’ll admit that the first  ‘Graveyard Classics’ released in 2000 was a fun little novelty with a wide range of rock & metal bands (Accept / Sabbath / Kiss / Venom etc.) tunes given the SFU mangling and that was fine. That one… just that one.

And then in 2004 the band had the ‘bright’ idea of releasing ‘Graveyard Classics Vol 2’.

Recording the whole of ACDC’s ‘Back In Black’ album was a dumb move and it got some well-deserved dogshit reviews. However….undeterred by the reception of that…. In 2010 SFU released a third album of covers….. seriously Barnes??? Seriously???

And now here we are with ‘Graveyard Classics Vol 4 – The Number Of The Priest’ another covers album featuring ….oh Christ…. five Judas Priest and six Iron Maiden songs being butchered by Six Feet Under. How creatively bankrupt can Barnes & co be to do this? Out of their fifteen studio album history FOUR of those records are these poxy ‘Graveyard Classics’ things!

Now I’m all for bands covering stuff. Maybe as the odd bonus track on a CD (Grand Magus’ cover of Purples ‘Stormbringer’ on their recent album is a belter) or dropped in the album somewhere to add a bit of spice (Sodom’s version of ‘Iron Fist’ on Persecution Mania is a ripper). Or maybe a totally mental choice of a pop song given a bit of a ‘metalling’ – Brujeria doing the ‘Macarena’ or Manson’s ‘Tainted Love’ but fuck me FOUR ALBUMS WORTH!!! That, to my mind, is taking the piss.

Right be positive Marky, enough moaning, what’s the music like.

Plus points are… well, the choices of songs to cover are quite surprising. None of the ‘obvious’ choices of Maiden or Priest are picked, rather some cool little numbers that you wouldn’t think of.

Priest wise we have ‘Nightcrawler’, ‘Starbreaker’, ‘Genocide’, ‘Invader’ & ‘Never Satisfied’.  Musically it’s all pretty competent but unremarkable. Nothing is done to inject any death metal nastiness into these songs….apart from Chris’s vocals which sound exactly like you’d expect. Which is a shame because what’s the point of covering a song if you’re not gonna do something a bit different with it? Speed it up, slow it down, I dunno do something – don’t just growl all over it!

You have ‘Murders In The Rue Morgue’, ‘Prowler’, ‘Flash Of The Blade’, ‘The Evil That Men Do’, ‘Stranger In A Strange Land’ & ‘Total Eclipse’. Interesting & weird choices I’m sure you’ll agree.

It takes a bit for an album to make me angry but I was driving to work with this playing in the car literally screaming ‘fuck off’ at the stereo by the time ‘Genocide’ came on…..and that’s track 3…. six tracks later ‘Evil That Men Do’ made me want to swerve into the path of an oncoming HGV to end the pain! I love Judas Priest and I love Iron Maiden and it’s obvious that Chris Barnes does too and rightly so….. but mate… just stop.

I genuinely cannot see the appeal of this album apart unless you’re a pissed up German at Wacken.

You’re better than this.