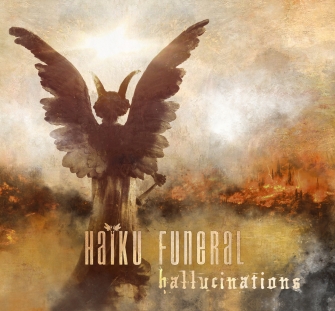 Last firing a shot across our bows back in 2012 when they delivered their ‘Nightmare Painting’ French / Bulgarian act Haiku Funeral really did strange things with my head. I described said album as “one for dreamers who are keen to explore uncharted territories within the mind’s eye,” and hoped that by revisiting it again for a refreshed course and listening to new album Hallucinations that I might get a further insight into exactly where they are coming from. Luckily I didn’t really expect to achieve this. I wouldn’t say that in the last 4 years they had got any odder as they were already well and truly there in the first place but with their “ahem” hallucinatory new album they haven’t exactly found sobriety or any form of lucidity either.

A catastrophically sounding biblical start sounds as if horns are being blown and walls are about to collapse with ‘The First Amphetamine Kiss.’ This goes very well with the Pazuzu like cover art before poetic and apocalyptic dark vocals are pronounced in a fashion that may well be a Haiku; so far so strange. From here the title track mashes genres together with electronics, harsh militant vocals, gothic, darkwave, death and cold and sinister fronds spreading out from it. The bass is as per last album really heavily pronounced and really makes its mark in the mix as drums bounce and rattle around along with the skewed and nightmarish riffs. I am reminded a little of bands such as Skinny Puppy, GGFH and Bile although this is as likely to change on a track by track basis as the trio of lunatics continue to throw erratic ideas into their bubbling cauldron. Ambient passages flow with that beefy bass brooding all over them and vocals electronically contorted. It’s strangely mesmerising and a very dark way of chilling out as it stretches into dream like film soundtrack territories. The threat is always there though as it sinuously slithers and oozes away allowing vocalist / bassist Daemonicreator as he is known in his day job with Corpus Diavolis to really show his experimental side. We are taken on a journey through ambient dub, jazz territories with some near hip-hop-trip-hop beats reminiscent overall of the likes of Bill Laswell and things are definitely trippy. The problem is that things are quite fragmented and incidental and if you are looking for actual songs they are not exactly willing to surface as structure and any rulebooks are thrown out the window. You find yourself somewhat aimlessly drifting along with it all and wondering where it is all going to lead as the word “suicide’ flows out the ether making you wonder if you are hearing voices commanding you to join them in your head.

Finally ‘Servants Of Fire’ hits a groove and rasps and thunders away with distempered and scornful electro vocals and rolling drums. We have hit an industrialised tumult and a song at last and although still highly experimental and with all sorts of strange sounds filling it out it’s almost a relief to embrace it. Naturally this is not something that is going to last as the album is back to meandering again, something it does well but unless you are a fan of ritualistic sounding dark ambient you may find yourself completely lost. The fact that this is essentially the way the album continues to culmination with the sprawling track ‘The Last Hallucination Of Christ’ may well leave you wondering if you actually imagined hearing any actual songs in the first place.

I think I have engaged with Haiku Funeral a bit more this time around although it was still rather hard work. Perhaps I would have enjoyed it more if it were one thing ie all ambient rather than with the couple of industrial sounding numbers embedded within it. Whatever way you look at this it’s still really obtuse and music done very much on the artists on whim. They haven’t even got an official Facebook or updated their Internet presence since the last album so one can only wonder if Haiku Funeral are even that bothered if you seek it out and discover for yourself.