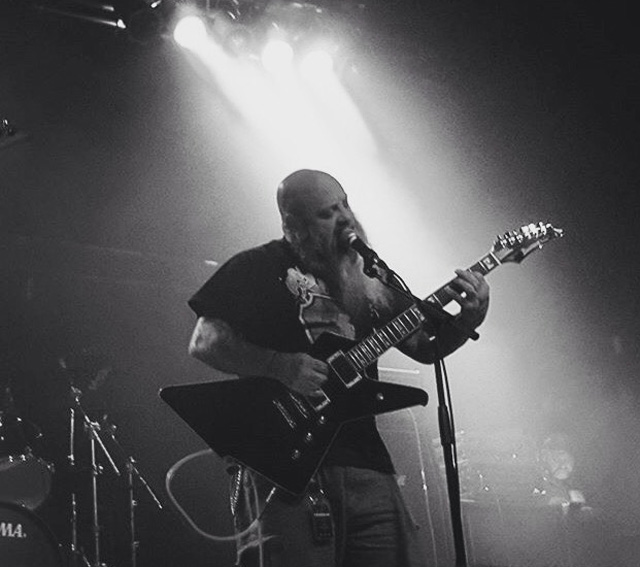 Celebrating its 5th anniversary, Desertfest London returns this year with an impressive array of bands, promoters and stages, taking over venues such as Koko, The Underworld, Electric Ballroom, The Black Heart and The Dev. Over the course of three days promoters including Human Disease, When Planets Collide, The Quietus and Old Empire show off their best line-ups with some of the heaviest bands that the doom and stoner scene currently has to offer.

GURT open The Underworld on the first day of the fest; despite the early start time of 2pm, the venue is heaving to capacity. Considering they played this same stage to a practically non-existent crowd three years ago, it’s wonderful to see how far the band have come. Their live performance sounds tighter than ever, with the vocal delivery for songs such as ‘Winston’ sounding even more ferocious. The crowd is treated to new material, such as the comically named ‘Owlmageddon’ which is packed full of groove-laden chug heavy riffs. The definite high point of this performance, however, is when GURT are joined on stage by Trippy Wicked and the Cosmic Children of the Knight to perform ‘Revolting Child’ from their upcoming split ‘Guppy’. It actually turns out to be a cover of ‘Children of the Revolution’ by T-Rex and it’s executed with suitable heaviness and gusto; the perfect way to open the fest. As the evening rolls around, The Quietus stage at The Black Heart plays host to The Poisoned Glass. There’s a lot of hype surrounding this pairing, considering they were formerly part of infamous doom band Burning Witch. However, what vocalist Edgy59 and bassist G.Stuart Dahlquist provide is a far cry from earth shattering riffs, instead providing creepy and transcendental drone. It’s not for the faint of heart and sees the venue empty out in droves. However, those that remain are clearly transfixed and this just adds to the atmosphere. Centred on bass guitar, organ and voice which join together to create bleak and stifling soundscapes, Edgy’s vocals are still as jarring as ever; unbridled tenor and dissonant harmonies creep and crawl alongside the massive sound of the bass. This is an enigmatic performance that’s impossible to look away from. Sludge is the order of the evening at The Electric Ballroom. NOLA heavyweights Crowbar take the stage for an hour of their trademark gravel-toned misery. Their set-list spans an impressive range of their back catalogue, including classics such as ‘All I Had I Gave’ and ‘Planets Collide’. Heavy and unrelenting, after watching this it genuinely feels like you’ve taken a battering both physically and mentally. Next up, Corrosion of Conformity close the Friday of Desertfest. They have Pepper Keenan back in the line-up and are all the better for it. Firing on all cylinders, they bust out more than a fair share of steady anthems high on a potent brand of quality. The 75 minutes that they occupy is a crash course in what classic sludge/southern metal ought to sound like. Both band and audience are left in high spirits following this high octane performance.

Conan have come a long way since their early days of deafening punters in backstreet boozers, they now pack out The Electric Ballroom, playing to a crowd frenzied by faster paced material from latest release ‘Revengeance’. Delivering one of the loudest and heaviest performances of the entire weekend, their signature guitar tone is on point, complemented by a backdrop of animation similar to Conan The Adventurer and Krull, depicting epic battle scenes and huge monsters pulling the roofs off of buildings. Their hour long set doesn’t neglect earlier albums either, as they play through thunderous renditions of fan favourites such as ‘Foehammer’ and ‘Satsumo’. It’s a mad dash to The Underworld as Slomatics begin their set the moment that Conan finish theirs. Once again, the venue is full to capacity as the Belfast-based trio send out shockwaves of groove-laden chunky riffs across the Human Disease Promo/When Planets Collide stage. A definite highlight is Conan frontman Jon Paul Davis being invited on stage to provide vocals, as well as a weighty performance of ‘Troglorite’. Needless to say, all want of caveman battle doom for the day has been sated. Next up, French drone five piece, Monarch, conjure up obscure and abrasive soundscapes teeming with walls of thick, low end bass and riffs played at a creepy crawl pace. This is tied nicely together by 10bpm percussion and whirring electronics, complemented by Eurogirl’s screams and MicHell’s deep roars respectively. The literal cherry on top at the end of the set is a cover of ‘Cherry Bomb’ by The Runaways. Sure, it’s a drone take on a riot grrrl classic, but it temporarily breaks the hypnosis the band have over the crowd and there’s a smile on genuinely everyone’s face. It’s nice when even “brutal” or serious bands can cut loose and have fun. Seattle doom quartet, Samothrace, make their long awaited return to London and absence has mostly definitely made the heart grow fonder, as their performance is transcendental in quality. Kinetic, inspiring and vivifying, the band create a dark yet comforting ambiance with intricate dual guitars, metronomic drumming and sparse yet well-placed vocals that are growled straight from the bottom of an abyss. They are without a shadow of a doubt the highlight of Saturday and anyone currently on any other stage is missing out. A typical Saturday night in Camden and both The Underworld and The Electric Ballroom have had to close their doors early to cater for the terrible club nights on offer, leaving every single attendee of Desertfest to try and shoehorn themselves into the tiny 150-capacity space of The Black Heart for the last band of the evening, Mantar. Needless to say, it’s a hot squash long before the German duo even take the stage and there ends up being a queue right around the corner of Greenland Place. Given the positive reception that ‘Ode to the Flame’ has received so far, this performance is one of the most heavily anticipated of the weekend. However, as the first chords of ‘Praise the Plague’ ring out across the tightly packed crowd, it’s clear to see the soundman has not brought his A-game with him and what should be a stellar performance is hampered by shitty sound quality. The bass is so high in the mix it sounds distorted, meaning both drums and vocals are barely audible. The combination of overcrowding, shitty sound and stiflingly hot temperatures make this set impossible to endure for more than a couple of songs. A massive disappointment. Kicking off the third and final day of Desertfest, Witchsorrow open the Old Empire stage at The Electric Ballroom, at the bright and early time of 2pm. Clearly not feeling the effects of the venue’s collective hangover, Necroskull makes a call to action of “Desertfest, bang your heads!” to the bleary eyed rabble that has assembled. It turns out that traditional doom and an evil atmosphere is exactly what’s needed to dust off the cobwebs and as well as playing the strongest material from ‘No Light, Only Fire’, older fan favourites such as ‘The Trial of Elizabeth Clarke’ and ‘God Curse Us’ are also given an airing, making for a set that’s infectious in energy and impossible not to sing along to. Bringing something entirely different to the table, Necro Deathmort provide the bleakest of dance parties with sparse but nasty riffs and thumping electronics. It’s an ugly, but completely enjoyable, sonic duo of all the nastiest parts of crushing leads and modern industrial noise. They’re certainly a bold choice for a stage that’s playing host to Blood Ceremony later on, but they completely enrapture those that come to watch and are seamlessly impressive in what they do. Finnish black metal weirdos, Oranssi Pazuzu, provide a crazy live show as always. Employing the use of their own light and sound techs, they create a completely immersive atmosphere; the performance is almost primitive in its nature and much of the crowd appears to be completely entranced by it. The flow between each song is seamless with what appears to be absolutely no pauses between songs, which just adds to the overall effect and intensifies the feeling that you’re on a bad acid trip. Much like Forrest Gump’s box of chocolates analogy, with Electric Wizard you never really know what you’re going to get and it’s anyone’s guess tonight as to whether they’re going to sound shit or not as they enter The Koko. Thankfully, the performance that ensues is definitely a good one – their drummer is actually playing the same songs as the rest of the band, which is a positive sign. However, it’s an odd set-list with a mixed bag of unpopular songs from more recent releases. They’re well play, certainly, but they just don’t hit home in much the same way as older material. ‘Black Masses’, although slightly controversial as it sounds like a rip off of ‘Witchcult Today’, manages to save the crowd’s attention due to its sing-a-long qualities. Thankfully, the band claw things back towards the end with absolutely stellar performances of both ‘Dopethrone’ and ‘Funeralopolis’. Looks like Jus hasn’t lost his touch after all… A sea of battle jackets and naff hair careers its way down Camden High Street back towards the Electric Ballroom for a rather late set courtesy of the all fathers of industrial metal, Godflesh. Most people look positively knackered by this point, opting to prop themselves against walls or just sit on the floor. However, those still with stamina left turn the audience into a flurry of movement for ragers such as ‘Christbait Rising’ and ‘Streetcleaner’. And just when this set seems like it couldn’t possibly get any heavier, Broadrick and his laptop keep everyone out well past their bed time for the obvious classic ‘Like Rats’. An exhausting end to an exhausting weekend and it was worth every moment. See you next year, Desertfest.