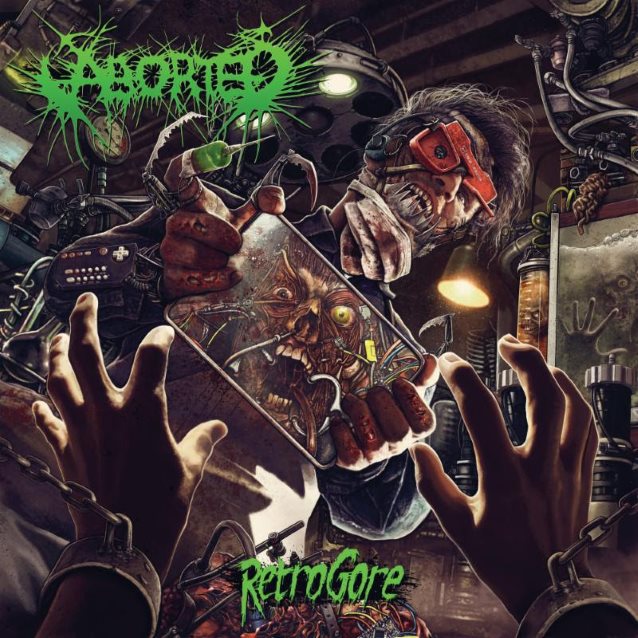 Now I must confess that I’m a bit of a latecomer to the Aborted party having only got into the band a few years back when ‘Global Flatline’ came out. I can’t recall how I came across them but I instantly loved the Belgians death/grind blend of aggressive leads and blastbeats coupled with some of the more memorable songwriting in the DM genre. I’ve been a fan since and was subsequently sent pretty much their whole back catalogue by Ben from Gorerotted. And that’s a seal of approval in my book.

Following on from 2014’s ‘The Necrotic Manifesto’ – another killer album comes ‘Retrogore’ which just might be Aborted’s magnum opus and will easily be up there in journos lists come December as death metal release of the year….it IS that good.

Vocalist and sole original member Sven de Caluwé gives the best performance of the bands extensive career – savage and precise – the best he has sounded which pretty much sums up the whole band on ‘Retrogore’. This is classic Aborted with the usual lyrical topics as gore, the horrors of religion, pornography, gore, serial killers, Cenobites and er…gore. This is a fun & addictive listen yet has some dark touches too on tracks like “Cadaverous Collection” & “From Beyond (The Grave)”. There’s some doomy moments too with some spooky melodies tucked away waiting for you to sniff them out. More catchy than ‘Necrotic Manifesto’ as a whole every song is hook laden and memorable. That’s not to say it’s not extreme, oh no, it’s probably got the fastest songs Aborted have written on it. The relentless brutality on tracks like “Whoremageddon” is pummelling. Thick, nasty, catchy riffs from Mendel Bij De Leij & Ian Jekelis are perfectly complemented by the avalanche drumming by Ken Bedene and  JB Van der Wal’s pounding bass lines. Fantastic retro artwork from Christopher Lovell seals the deal for me.

Aborted have always brought something a bit special and different to the death / grind table and this tasty (s)platter is without doubt their tastiest course yet. Well recommended.