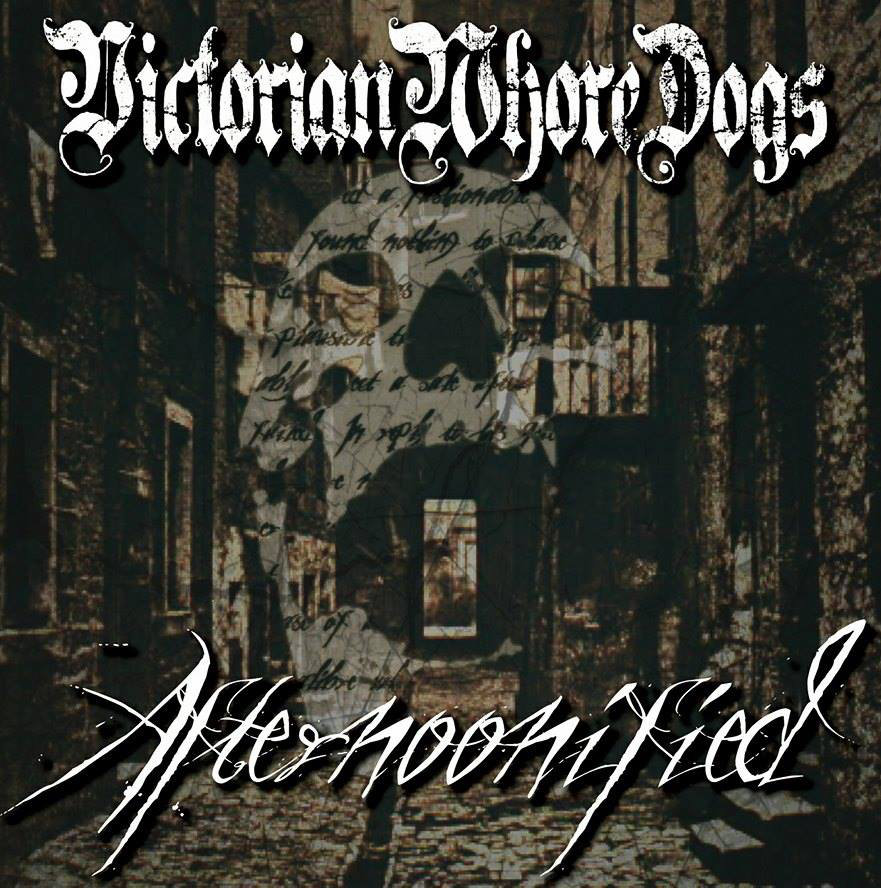 Wit, humour and sludge do not often go together. Victorian Whoredogs mean to rectify that. Guildford in Surrey is also not a typical setting for downtuned moss covered riffage but that is exactly where this 4 piece herald from. “Afternoonified” is the band’s first full length having released two E.P’s previously – Fetch in 2013 and last year’s Hobo Chic.

Now the track titles are funny –   (I can’t believe it’s ) Nutbutter and Captain Kirk Was my Favourite Stormtrooper are my two faves – but the music these jokers produce is no laughing matter. This is a good and groovy collection. Eleven songs of raw spiky punked up sludge that oozes attitude from its crusty pores. The drums are quite far down in the mix but this gives the whole affair an angular lo-fi feel. It reminds me in parts of Amebix with vocals by Johnny Morrow. Barrington Monroe opens with a riff that reminds me at once of Crazy Town and Linkin Park. WTF!!! Worry not. It soon transcends into a spacey ethereal shoegazing sludgebucket of a tune which delights rather than repels.  There is a whiff of Ufomammut here and the space power is strong with these Surrey gents.   Once I get to the aforementioned Nutbutter track I am reminded of Gorerotted both for the bizarre threats in the visceral lyrics and also the raw riffs and delightful ballsy attitude.  Where these whoredogs fall down a little for me is that it gets a little too lo-fi for me. In Snatch Files once the guys go in acapella it sounds a little too early 2000’s demo for me making a bit of a disjointed piece in this mud pie.

“NaanShaag” is a brute. A mix of rasp and death growl plus some truly heavy doom riffs show just what VWD can do when they set their phasers to Sludge.  “Southern Fried Homicide” which follows foregoes the big riffs of Naan in favour of a starker feel, like a more death metal Tau Cross.

“Sebastian Thunderhoof” brings things to a close in a sombre fashion. For a band that appear to eschew good humour this, when taken out of context is quite a shock. It appears to fit more into those groups you see on Facebook of sullen teens looking for music about suicide.  Having tried to listen to Depressive Black Metal in the past but being too old and too happy I can see this going down a storm (or whatever an anti-storm is ) with fans of that ilk.  I would love to read a lyric sheet and see if this is a piss take as la Evil Scarecrow of if the chaps where going through a tricky patch when it was written. If the latter – hope you are feeling better as your melancholy is plain for all to see and I bought it.

I found that this is an album to shuffle as there are not really strings coupling the tracks to each other. This is not a symphony rather a collection of compositions.  Surprisingly, out of order they all stand up to repeated listening and I can see myself getting afternoonified again and again. Maybe, rebel that I am, even in the morning!